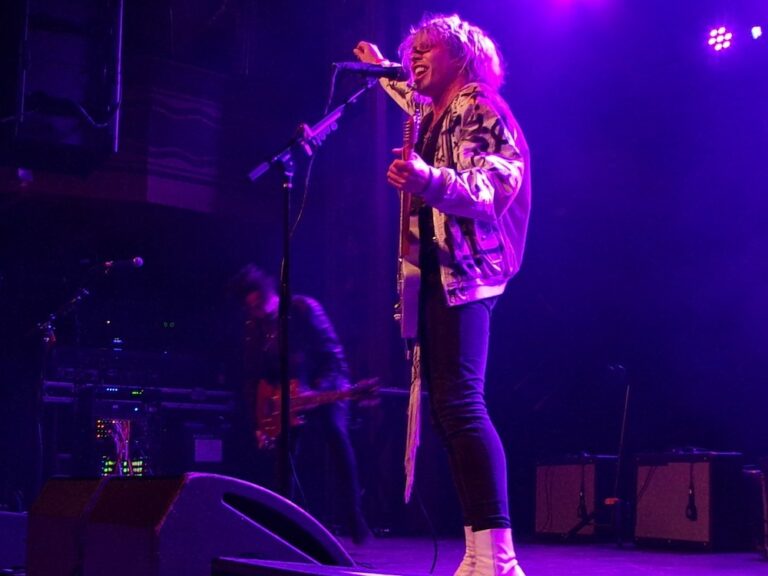 Barnaby George “Barns” Courtney might seem like just another singer with a few songs on rock radio until you see him live. On a stage, before a live audience, that is where he demonstrates his trajectory to rock star status. At Webster Hall, he gave a stadium-sized performance in a medium-sized ballroom.

Courtney’s beginning are humble. He was born in England, then at age four moved with his family to Seattle, Washington, returning to the United Kingdom when he was 15. Courtney led two indie bands, SleeperCell and Dive Bella Dive, both of which made little impact in the music industry. He toured as a singer-songwriter. He scored a recording contract and recorded an album that the record company never released. Determined to continue pursuing a career in music, but with no income or home, he supported himself by working a day job while sleeping on friends’ sofas and in his girlfriend’s car.

In 2015, Courtney released his first track as a solo artist, “Glitter & Gold,” which was later used in the trailer for the 2016 film The Founder. Also in 2015, “Fire” was featured in the movie Burnt and received airplay on American rock radio in 2016. Over the ensuing years, several other tracks were featured in advertisements, video games, films, television programs, and sports events, but none of these short-lived exposures significantly increased his profile.

Courtney had modest success with albums in 2017 and 2019. Courtney is looking for a fresh restart with the release of a forthcoming album, which so far has no title or release date, but is expected later this fall. He released the album’s first single, “Supernatural,” on September 9.

Like a man shot out of a cannon, Courtney stormed on stage and immediately commanded full attention, as his loud guitar-bass-drums power trio launched into a turbo-fueled “Fun Never Ends.” This was hard-driving, maximum-energy rock and roll. As he bounced, danced, and zoomed across the stage, Courtney was a natural showman with all the right rock star moves – he wore the right clothes, he jumped from the drum riser, and he sang while crowdsurfing. He consistently made eye contact with his fans in front and used all his flailing body language to incite responses from his audience. He successfully commanded his audience as to when to get quiet, when to scream, and when to jump, jump, jump.

Fortunately, he was not all about the energy. He had the songs to back up his kinetic visuals. Courtney sang with a bluesy, emotive voice. Drawing perhaps from the gritty hard rock sound of classic rock bands the likes of Guns N’ Roses and Aerosmith, his songs were filled with commercial appeal, with flowing melodies and hook choruses. The enthusiastic audience provided gang vocals on those choruses. For the encore, Courtney performed “Hard to Be Alone” alone, accompanying himself with just an acoustic guitar.

Is Barns Courtney all the way there? Not yet. He is struggling to get the attention of rock audiences, judging by the half-filled venue, but he has a very promising future.