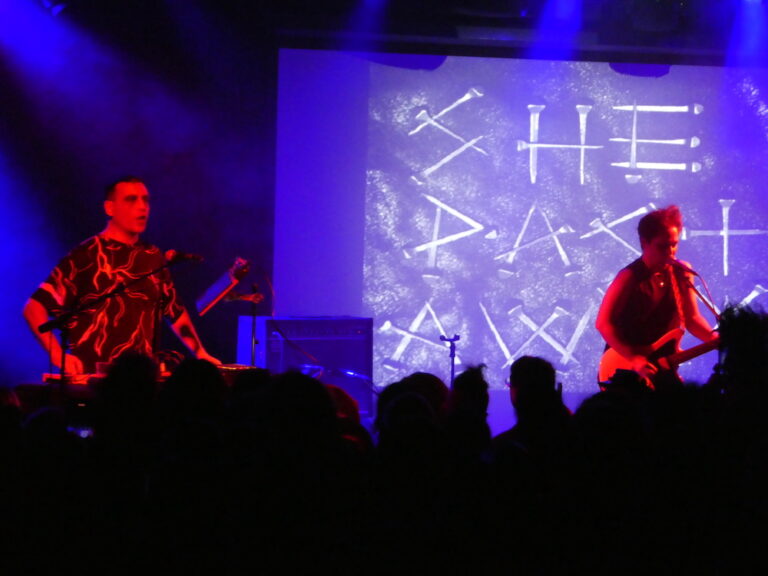 Can a gothic darkwave band that sings minimalist poetry in Turkish find an American audience?

She Past Away formed in 2006 in Bursa, Turkey. The band’s avant garde music and image gained underground attention internationally in 2010 with the release of the EP Kasvetli Kutlama. The early post-punk electronic sound gravitated to a darker disco-influenced sound by the 2019 release of the third and most recent album, Disko Anksiyete.

Vocalist/guitarist Volkan Caner played in extreme metal and electronic bands in the early 1990s and moved into darkwave by the end of the decade. Unable to find fellow musicians interested in committing to this genre of music, he started composing songs alone, under the name Psychoma. These songs later evolved into She Past Away. Caner has paired with keyboardist and electronic percussionist Doruk Öztürkcan since 2015 for live performances.

At (le) Poisson Rouge, Caner and Öztürkcan performed a sound that was both retro and post modern. The electronic pulsing rhythms and especially the motorik percussion recalled 1980s new wave music, encouraging a fair amount of the audience to sway in place to the grooves. Ominous vocals and minor chords made the music sound more mysterious and grating, distancing She Past Away from new wave pop.

Mist and dark lighting obscured the stage for the entire performance. This added to the spooky milieu. Bright lighting would have dissolved the doomy ambient.

In the end, She Past Away indeed sang in Turkish, and this did not seem like an obstacle. Caner’s vocals and Öztürkcan’s computerized programming successfully relayed passions and sentiments. Fans with a greater interest in Caner’s poetry can find translations of many of Caner’s Turkish lyrics in 10 languages at here.