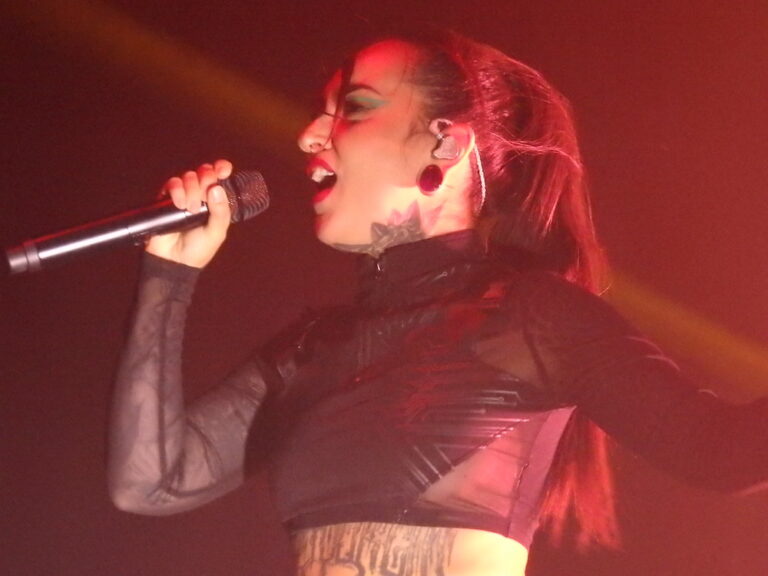 In June 2022, the Ukrainian Ministry of Culture granted an exemption for the musicians in Jinjer and their crew to leave their war-torn native land in order to tour the west as ambassadors of the nation. Perhaps the government hoped that the heavy metal band could help rally support for relief efforts after Russia invaded Ukraine in early 2022. Jinjer’s tour continues until December 22.

Indeed, a portion of the proceeds from each concert has been dedicated to Ukrainian relief efforts. More importantly, lead singer Tatiana Shmailyuk each night reminds the audiences of a more fundamental human need – the inherent need for the people of her country to be free and safe. “We want our home back!” she shouted at the Hammerstein Ballroom.

The original Jinjer formed in 2008 in Donetsk, Ukraine. The original musicians left one by one, such that presently none of the founding members remain in the band. The current lineup stabilized in 2016, with vocalist Tatiana Shmailyuk, guitarist Roman Ibramkhalilov, bassist Eugene Abdukhanov, and drummer Vladislav Ulasevich. Jinjer’s fourth and most recent album, Wallflowers, was released in August 2021. Some of the band’s more recent compositions have spotlighted lyrics addressing the war in Donbas and its effects on their home region of Donetsk.

At the Hammerstein Ballroom, the ambassadors in Jinjer used their primary skill sets to do what they do best. They played bone-crushing groove metal, metalcore, and technical death metal to its growing following. Jinjer played songs from all four albums and also from the most recent of the band’s three EPs, 2019’s Micro.

As the band started the set with “Sit Stay Roll Over,” Shmailyuk’s vocals concentrated on death metal growls. This was contrasted in later songs with soft and sweet vocals, even when she sang over deep and gritty djent riffs. A few times she alternated these two vocal deliveries even in the same line in a lyric.

Shmailyuk played well to the audience. She was such a magnetic presence on stage that she commanded attention at all times, even when she stood still. She moved with grace across the stage, only to crouch and scream or snarl a guttural interlude. She slayed the audience, even during the more technically progressive songs “I Speak Astronomy” and “Pisces.”

Several western musicians have performed random benefits for Ukrainian charities in the past year. Jinjer has crossed the United States on a mission to remind American youth that the battle continues to rage in Ukraine. On a parallel level, the band has does a commendable job of of bringing its rage into its performances as well.