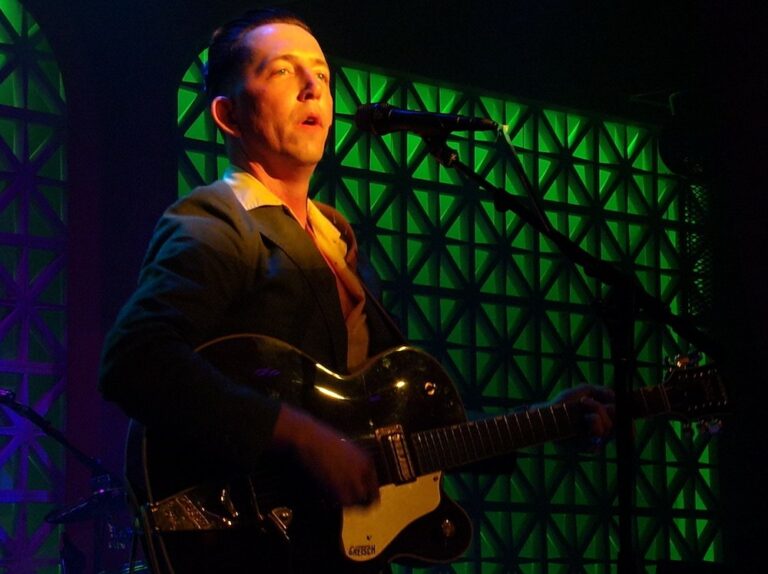 Pokey LaFarge performs new songs with an old-time Americana feel. His songs draw elements from Appalachian folk, bluegrass, country blues, early jazz, honky tonk, ragtime for string instruments, vaudeville, western swing, and possibly other sources. LaFarge has used this treasury of assorted influences to create a vast well of original songs. He released his ninth and most recent studio album, In the Blossom of Their Shade, in 2021.

Born Andrew Heissler in Bloomington and raised in nearby Normal, Illinois, he began playing music as a child when his grandfather gave him a guitar. His mother nicknamed him Pokey and he became LaFarge as a young adult reportedly because it sounded like what he was looking for musically. With slick-backed, side-parted hair and a vintage-fitting suit, he began to look the part of an old-timey musician, as well.

At Brooklyn Made, LaFarge sang and played guitar, accompanied by a lead guitarist, a pianist, a bassist, and a drummer. LaFarge sang in the upper range and crooned smoothly and soulfully. Band members contributed subtle yet stinging guitar fills or piano rolls along with backing harmonies. The arrangements convincingly captured the compelling melodies and joyful spirit of early 20th century music. The rustic-sounding music was like a blast from America’s past, yet performed seriously enough to elevate beyond novelty status.

LaFarge has chosen the path less taken. Rather than play the mainstream for fortune, he has committed to a retro sound that resonates with smaller audiences. The authenticity in his craft translates into a celebration of rural American roots music.