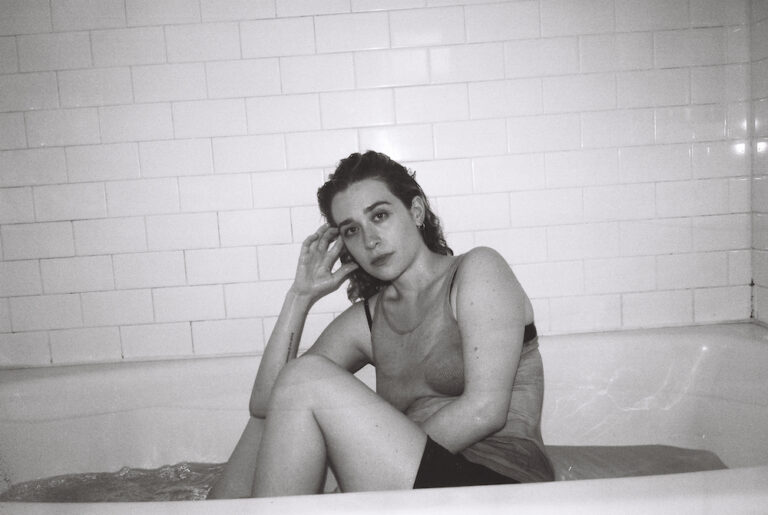 Navigating notoriety is something very personal, unique to your life. For Blondshell, a soulful alternative act with bedroom pop sensibilities, navigating notoriety means showcasing her truest, purest self – visually, through in-the-moment artwork, and lyrically, through nostalgic, introspective songwriting. A New Yorker at heart, Blondshell is charming in her blunt, confessional approach to such writing and creating. However, currently living in the City of Angels means that Blondshell doesn’t have to shy away from intertwining that into her art. Her impassioned Big Apple nature mixes well with the laid back aura of the West Coast to create a sound that is bold but cozy all at once.

She is all about living in the moment, especially on a stage where concert goers are maybe just getting to know her. The singer shares that she might think, “Am I nervous about this show? That’s ok. If I am, I’m not really going to try to hide it. I’m just going to try to put it in the music.” It’s not just nervousness either, the grounded Blondshell wants to showcase her whole real self to those listener, even if she’s trying to convert a set of unknowing attendees into fans. “If I’m angry about something or whatever,” she continues, “I just try to like show up and put that, [or] however I’m feeling that day, in the music.”

As of late, though, she has been cultivating a fairly rabid following of fans, a group of hundreds of thousands begging for more songs to be streamed on Spotify being as the amount of tracks on the platform released by Blondshell can be counted on one hand. Even more recently, though, the singer-songwriter has been honing her on-stage craft, opening up for our December 2022 cover star Suki Waterhouse on her The Coolest Place in the World Tour. (This, of which, comes to Philadelphia and New York City on January 27 and 28, respectively.) The pair of artists make for a mellifluous night folk pop / alt rock fusion and spirited storytelling. We couldn’t wait to hop on a call with Blondshell – Sabrina – to get the 4-1-1 on all of that and more.

Right off the bat we’d love to talk to you about the tour with Suki Waterhouse – a great lineup with you two – which is underway and coming to New York very soon. How has that experience been? What are you looking forward to continuing on?

I’m excited because I like Suki’s music and with that I just think there’s going to be good energy on the tour. Something I’m most excited about is just getting to be on the east coast again. That’s where I grew up and I just don’t get back there that often. I’m excited to go to places like DC, Boston, New York, just to be in that home area again.

Of course we’re a bit biased to the east, but we have to say we are just as excited for your return here. So many fans are really stoked to hear “Veronica Mars” live. That song has a really great tone to it that I, too, think will translate well on stage.

Thanks. That one is fun to play live because it’s just really high energy with the guitar solo and all that. It’s one of the fun ones live.

My favorite song of yours is “Sepsis,” but only a couple songs of yours are out in the world for fans. You have “Olympus,” “Kiss City,” the aforementioned two, and a Spotify single with “Cartoon Earthquake.” For you, what is your favorite song to play live so far and or what are you maybe most just most excited about bringing to life on stage?

I think “Sepsis” is actually my favorite, too, because it feels like it sort of has the main theme of the whole album [Out on April 7] in it – it just kind of cuts through all of that. I think that idea in the chorus that’s like, “Is this gonna kill me? Are these feelings gonna kill me?” is so fun to play live because that’s really what I wrote the whole album about. To get to talk about that and sing about that in front of a lot of people and have them receive it well is always really fun for me. So probably that one I’m [excited for], but I’m just excited to put more of these songs out so that people know them more during the shows. I think it’s been really great that people have had that kind of curiosity to go to shows and see the opener and not know that many of the songs and so I think it’ll be nice for people to know more of them.

I love that. That is very true. I think a song like “Sepsis” does have a universal theme lyrically outside of the overall energy. One thing that I really admire about you, Sabrina, is that you have a really cool consistency to your visual artwork. The covers of these songs, the videos, and everything that you’ve put out has a really stunning and cohesive element. How much of that do you kind of control? How much do you impart?

Yeah, with the visuals, something that was really important to me was to have it sort of reflect how I made the music. I didn’t make it in this like highly organized, highly planned out, high budget kind of way. I sort of wrote all of these songs in my room, in my apartment, and then I ended up bringing them to a producer to work with. I really wanted the visuals to reflect that writing process where I was alone… and it was very much just me figuring things out in my apartment. So I just ended up using a lot of photos that were already taken, like friends or whatever had taken photos of me in my space. [Using] some of those photos just gives a window into how I made the music.

I think I always want the music to feel really accessible and I think that it can show you more of who I am if you see me in my space, just being myself. That was kind of like the idea with all the visuals, but then with “Sepsis,” I was sort of like, “I don’t really know what I want to do for a video. What do I do? What are the ways that I spend my time?” I was like, “The love of my life is my dog and I just want to have somebody film me walking around with him” and that was kind of how that happened.

I think that’s the way it should be with art – it should be a reflection of you and not feel a need to check specific boxes to reach milestone streaming numbers… even though you have some 300,00. [A/N: 397,000 and counting at the time of writing this – almost 30,000 more than when our interview was conducted days prior.]

Mentioning streaming services like Spotify actually has reminded me that when I was looking at your page on the platform, I saw that you had songs placed on playlists like “Alternative Now” and “sad girl starter pack.” One that really stood out to me was a playlist called “real life angel” and it said that it included “dark” and “dreamy” songs for “night creatures,” which I think has a really cool vibe to it. When you see that sort of curated placement of your songs, does anything stand out to you? What does that feel like?

Well, something that I like to do now. I saw because my friend had done it and then posted a video like, “Go in the Spotify app and look at the listener’s playlists.” Not the editorial Spotify playlists, but the ones that are like the real people who are listening to these are making off of their user profiles. I like to do that because that sort of gives me an idea of who is listening and who else they like to listen to. Also, the names are always hilarious and that’s something with playlists that I really like to do – just see who is listening that way.

That is so cool; that kind of fan made appreciation from the actual people behind a screen who are adding to these numbers of yours.

Yeah, because it’s like I want to know about the people who are listening to the music because these songs were so personal for me, so for people to listen to them… I didn’t know if anybody was even going to listen. So for people to listen to them and relate to them is really special for me and I want know more about the people who are listening in little ways like that. That’s why I’m excited to go on tour, too. I mean, this isn’t my headline tour, but I’m sure I’ll meet a couple people who are going to see me and I think that’ll be really exciting just to talk to people face to face.

FOR ALL THINGS BLONDSHELL, INCLUDING HER HEADLINE TOUR, CLICK HERE! THERE YOU CAN FIND INFORMATION ON HOW TO SEE HER OPEN FOR SUKI WATERHOUSE THIS WEEK IN NYC AND PHILLY, TOO!