SAYREVILLE, NJ—If asked beforehand, I’d have sworn up and down that The Bakerton Group (the jam band side-project from the Clutch dudes) was opening this show—apparently not so much. Instead the crowd at Starland was treated to the UK’s Viking Skull and Chicago post-(instru)metallers Russian Circles. Well, alright.

Viking Skull, who started out as an offshoot of bitchin’ beercore troublemakers Raging Speedhorn, have now gained notoriety on the back of having Jess Margera (Bam’s brother who also plays in The Company Band with Clutch’s Neil Fallon as well as CKY) on drums. He’s not from the UK. He’s from Pennsylvania. The band is from the UK. Apparently they were rounding up when it came to locale.

Wherever they’re from, their stoner-rock-by-numbers paeans to the generic topics of whiskey, weed, women and getting screwed over found a receptive if subdued response to all but an especially passionate few in the crowd; this contrasted by Russian Circles, who had a very, very hard time making friends in Sayreville. Their single-lightbulb lightshow probably does very well in the hipster bars and über-cool basement shows, galleries and wherever else they play, but as Jersey’s Clutch contingent filled its considerable bellies with beer upon overpriced beer, their scrawny punk-kid-gone-art-metal aesthetic fit worse than some of the t-shirts walking around the place. 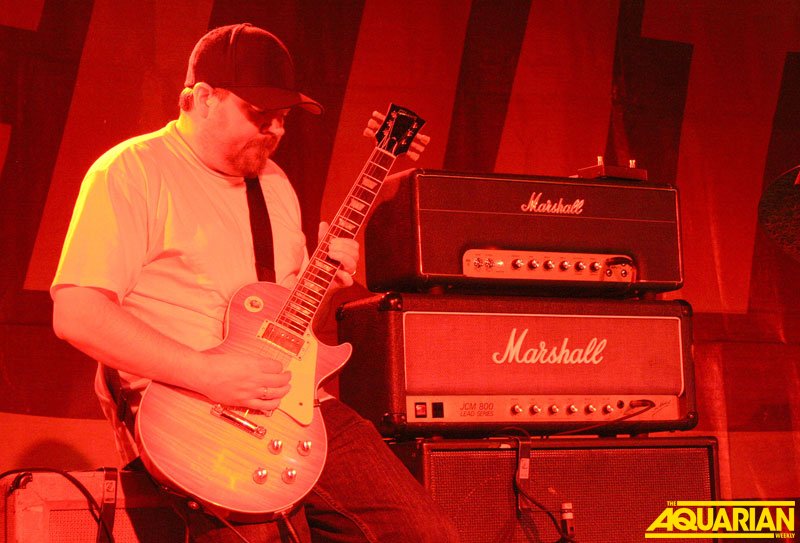 They also seemed to play for what felt like an exceptionally long time, or perhaps that was my feeling awkward for the band on stage, trying their hardest despite the December chilliness of the reception, boos and Clutch chants and whatnot. Poor bastards. To their credit, they did their thing and did it well, I’d just wonder some about the timing and placement of that thing on the bill. As an opener, Viking Skull’s leather jacket rock probably would have been better suited to direct support than the stylishly ripped jeans and whatever else those dudes were wearing in the mostly dark up there.

I hadn’t seen Clutch yet in 2008—because I sure as hell wasn’t going to catch them at Roseland with Coheed And Cambria—so I figured it would be a good way to end the year. And it might have been were it not for the circumstances of the show. The Mrs. and I stood on the far side from the entrance, just at the top of the stairs by the lower bar—you know where I’m talking about, right by the box that the security guys stand on. It was a great place to be—until the simple flood of humanity trapped us against the edge of said box and rendered us immobile and unable to escape. Then Clutch went on!

The back and forth parade of falling-down drunkards to and from the bar the only access point to which was apparently up my ass did little to sap my enjoyment of Clutch, whose live performance is about as guaranteed to please as Butterfinger ice cream. Their last album may not have been their best, but they never stop killing it live—probably because they never stop touring.

It was curious to see them after nearly a year (or over a year, who needs counting?) because in the time since we last encountered each other, Clutch went off and became a jam band too. Almost every song left room for guitarist Tim Sult, bassist Dan Maines and drummer J.P. Gaster to go off, vocalist Neil Fallon joining them at one point on cowbell when he wasn’t holding his guitar. I’d liken it not musically but in terms of the surprise factor at least to the first time I saw Primus after they reunited and had a moment of, “Hey, when the hell did this happen?”

They opened with “Who Wants To Rock?” and the “Hey hey now, what’s that smell/Just like cornbread done too well” allusion was lost on the smoking-banned crowd, who didn’t let that stop them from getting into it, much to their credit. From there, Clutch went through a smattering of newer-era songs off their most recent albums, From Beale Street To Oblivion and Robot Hive: Exodus. No complaints from anyone, and when they saw fit to bring out classics “Big News I & II,” of course with an extended jam in between, the songs were welcomed like old friends.

That was right around the third drum solo. No shit. Three. And I didn’t stay to see if there was going to be another. Don’t get me wrong, I’m probably a bigger Clutch fan than most, and I’m really glad that those guys are comfortable enough with each other as musicians to improvise like that, but god damnit, play the song. You know when everyone cheers in the jam? When it goes back into the song. Think about it.

Hell, these guys have a jam band! And they’re damn good! And if you want to have The Bakerton Group open for Clutch, I’m more than happy to show up early and see these guys pull double duty, but come on. That’s 20 minutes out of the set that could have been devoted to, I don’t know, songs.

The thing is, they still ruled, and when Clutch comes around again, I’ll go again, and when they put out a new album, I’ll slobber all over it. I’m marked. So take the above for what it’s worth. Yours truly, Complainy McGee.