Mike Ski has been leading something of a double life. While known best as the lead singer for good-time punk rockers The A.K.A.s, Ski has spent much of his downtime—if you could call it that—tattooing the musicians he’s sharing stages with. Members of Bayside, Silverstein, Bring Me The Horizon, Hawthorne Heights, Fall Out Boy, Set Your Goals, Emery, Bleeding Through, Alexisonfire, P.O.S., Hit The Lights, Anti-Flag and many more have all been inked by Ski through his many years on the road since the A.K.A.s’ debut, White Doves & Smoking Guns, in 2003.

Maybe double life isn’t the best turn of phrase—he’s not doing it in secret—but at the very least, it’s double duty. On this year’s Warped Tour, where he and his bandmates were on in its entirety supporting their recent release, Animal Summer, Ski was probably putting in just as much time tattooing as he was performing his various duties as a punk band on the summer’s longest festival.

On the eve of his flight out to Hawaii (something of a vacation) to perform some club dates, Ski was eager to talk about his love for the art of tattoos.

Were you a tattoo artist before you were in The A.K.A.s? Is that what you did as a job?

I’ve done it throughout the time that I’ve played music. I’m also a graphic designer. But I’ve been tattooing for about 15 years now. The last shop I worked in was when I lived near New York, I worked at a shop called Lotus in Long Island, which is Civ from the Gorilla Biscuits, that’s his shop. He’s a really awesome tattooer. But since then I’ve been touring so much that I’ve just been tattooing on the road.

How did you first get into tattoos?

I was just always into the aesthetic of tattoos and the kind of hard work that they went along with. I was listening to punk music and playing in punk and hardcore bands early on and a good friend of ours in town where I grew up in northwest Pennsylvania, he started tattooing and he would tattoo all of us. He ended up moving away, and we didn’t really have anybody else to tattoo us because the other people in town weren’t really doing the kind of tattoos we were into.

One day I was like, ‘You know, I think that I can do that better anyway.’ With the money from my graduation party from high school, I just bought a set of stuff and just started tattooing. I didn’t apprentice anywhere, which is kind of a bummer in hindsight, but I had a lot of encouragement and a lot of help from my friends to give me practice (laughs). Shortly after I ended up befriending some other tattooers and stuff and that was a chance to get caught up and speed up the learning process. But I always feel that tattooing is a never-ending learning process, and I’m always learning stuff every day. Even this summer on Warped Tour, I learned so much stuff. 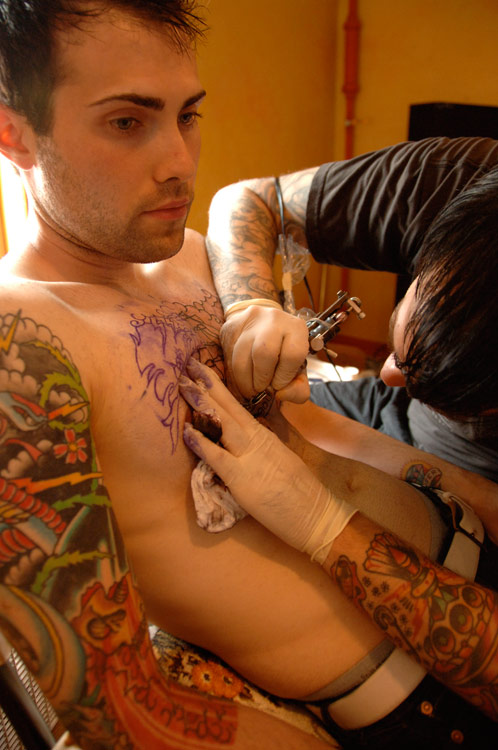 Who is the lucky person that was your first victim?

This kid that I know, he’s named Eggy. He used to sing in a hardcore band called Abnegation from Erie. He’s got an awful, awful tattoo from me. But my best friend, this guy Rob Whipple, he has my second tattoo, and it is equally as awful. He and I still live in the same neighborhood in Philly now, and I see him all the time. Basically, I’ve extended him free good tattoos for the rest of his life in exchange for it. Right before Warped Tour I ended up doing a big half-sleeve on him for free just to pay him back and he loves it. I think maybe it’s worth it. His wife says it looks like the Christmas tree from Charlie Brown. It’s definitely bad. But since, I’ve hopefully done some good tattoos.