NEW YORK, NY—The Von Bondies have been in the biz for a decade, they’ve been backed by Sire Records—one of the industry’s giants—and the band’s frontman has even made news headlines around the globe for being involved in a blow with Jack White. But despite all of that—and a four-year hiatus—the Detroit rockers’ New York show was held at the Bowery’s smallest venue, Mercury Lounge. 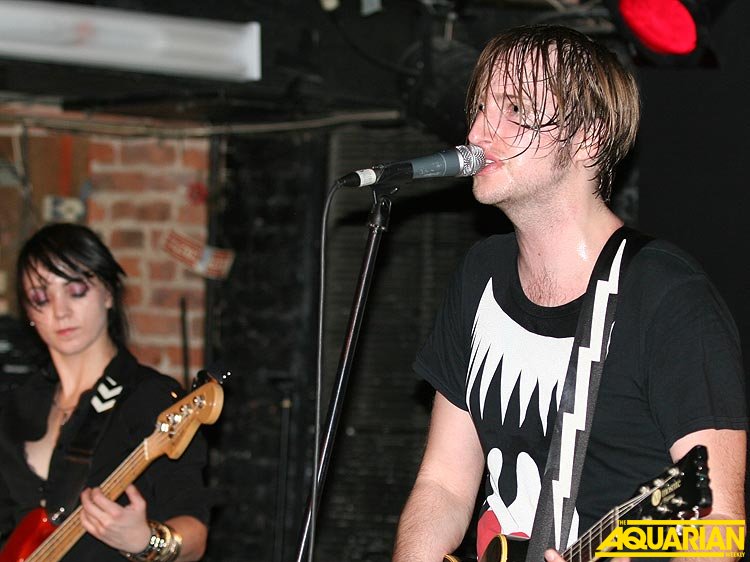 On one level, I found this astounding. The Von Bondies’ tunes are good, their stage show was great, and they’ve dabbled in everything from punk blues to garage rock over the years. But at the same time, the Von Bondies’ tunes have never been amazing, and their stage show wasn’t brilliant. So it seems they’re just one of thousands of bands who will never be the best—they will just be. And this is a huge shame.

Not too long ago the Von Bondies were in a situation that promised, at least for a short period of time, to open the doors to something better. Sire Records released the band’s popular 2004 delivery, Pawne Shoppe Heart, which was well-received by fans and critics. But when they got to work on songs for their next album, Sire told the alternate rock band that their music wasn’t “emo” enough—and this was enough to make them want out. So they spent three years and plenty of legal fees trying to break free from the Warner Music label. And now, even though they’re signed to Majordomo Records, the band still foots a lot of the costs involved. So, after a lot of money, headaches and heartache, what do they have to show for it—and is it all really worth it? Does the time and effort the Von Bondies have invested into their uphill battles show returns if all they’re ever going to be is slightly above average? I guess the answer comes back to the core question for so many artists nowadays; are they in it for love or money?

The Von Bondies’ journey until now shows they’re passionate about their music, and they fight for what they believe in. So on that level, they deserve a lot of respect. And look, their show was decent. They were naturals on stage and performing came easy to them. The bandmates were completely in sync, and they stirred some great vibes among the crowd. While this sounds impressive, after 10 years I would expect no less than a decent performance. In fact, if anything, I would expect much more than a decent performance—and theirs was narrowly above par, at best. And I guess that’s why this band has survived and not thrived. To their credit, after a decade on the beat, they create music they care about, and don’t try to be anything other than themselves. And their fans are definitely dedicated. This gig was part of a tour supporting their most recent delivery Love, Hate And Then There’s You, and those who attended couldn’t get enough of their tunes, especially the show highlights “Pale Bride,” “C’mon C’mon,” “Shut Your Mouth,” and “She’s Dead To Me.” At this very intimate gig, I felt a sense of loyalty and commitment among the crowd that was rare for a New York show.

While I admire the Von Bondies’ courage and persistence, there’s a part of me that just wants them to make huge changes to their image and their music right away—or to throw in the towel completely. Based on what they’ve been through and where they are now, if the next 10 years pose as many ups and downs as their first decade in the industry, it’ll hardly be worth it.