So, last May when I was in Las Vegas, I featured a tattoo parlor called Pussykat Tattoo. This past May, I made my yearly jaunt back to the City of Sin and made a pit stop into Vince Neil Ink, which is located right on the Vegas strip across from Caesar’s Palace. Yes, I know! Some of you might be saying, “Doesn’t Tim write about anything else that’s not Mötley Crüe related?” Hey, can I help it that one of my idols owns a tattoo shop on the Vegas strip? You should’ve seen what it was like for me to drag my girlfriend in there with me!

Anyway, Vince Neil Ink was everything that I thought it would be! Like I said, it’s located on the Las Vegas strip in O’Shea’s Casino. In this instance, location is definitely not a problem. Upon entering the shop, the walls are adorned with Mötley Crüe memorabilia and merch, as well as, Vince Neil merchandise. It’s virtually a Mötley Crüe fan’s wettest dream! This immaculate 1,230 square foot shop features four tattoo rooms, which includes one VIP room and one room that allows Vegas strip strollers to view tattoos in progress. Also, in the front window, to complete the rock ‘n’ roll vibe is a chopper built by Count’s Kustoms. It’s displayed with “Girls Girls Girls” painted right on it. Did I mention that this place a Mötley Crüe fan’s wettest dream? 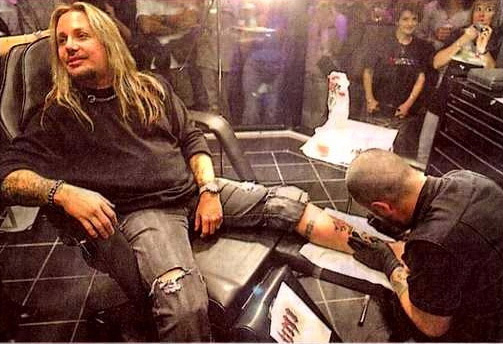 Anyway, when I walked in the shop was already packed with people either looking to get work done or were just there as observers. Already tattooing was head tattoo artist, Dano, who by the way, is my new hero after reading his Republican views on his MySpace page. Dano has been tattooing for about 20 years now and his work speaks for itself. Actually, the whole crew—or should I say “crüe”—are exceptional artists, and I guess you would have to be if you’re being showcased on of the biggest tourist attractions in America. Rounding out the rest of the artists at Vince Neil Ink are Juan, Jeromy, TJ, Less, Brett, Bumper, Marq, Kat, John Law, Ron, Justin, and MJ, while Jenny, Alison, Ashley, Jessica, Paige, and Lauren maintain the front of the shop. The majority of their work is custom, but they won’t turn down any flash art if it’s requested, but after looking at their work, I would request some custom work if I was to get anything done here.