HOLMDEL, NJ—If there were only one show worth attending at the Arts Center this summer, I would say it was this show.

Of course, this was the only show I attended at the Arts Center this year, so I might not be the best judge of that. Jane’s Addiction and No Doubt and Blink-182 have all blown through the Garden State on this amphitheatre season, but there was one thing that they didn’t do that Judas Priest did.

Still, there was some noticeable heavy metal exhaustion. Seated to the right hand of Black Sabbath in the Birmingham metal triumvirate (Napalm Death on the other side, of course), Priest had come through last year with Heaven And Hell, Motörhead and Testament supporting on what was on paper an undoubtedly stronger bill. Without the classic album performance, this would likely have been a disappointing show.

But it was far from it.

But first, Whitesnake. There was a small but dedicated contingent of Whitesnake followers who appeared early for a heavy dose of hard rock nostalgia. Still, the feeling that many in the audience knew “Here I Go Again” best from its prominent use in Old School was palpable, and a little frustrating. A good set by Whitesnake, but David Coverdale wasn’t quite hitting the notes he should have been, though he was still in decent form. One month to the day later that Whitesnake cancelled their remaining dates because of a problem with Coverdale’s vocal chords, likely the cause of any consternation with his vocal performance this year. 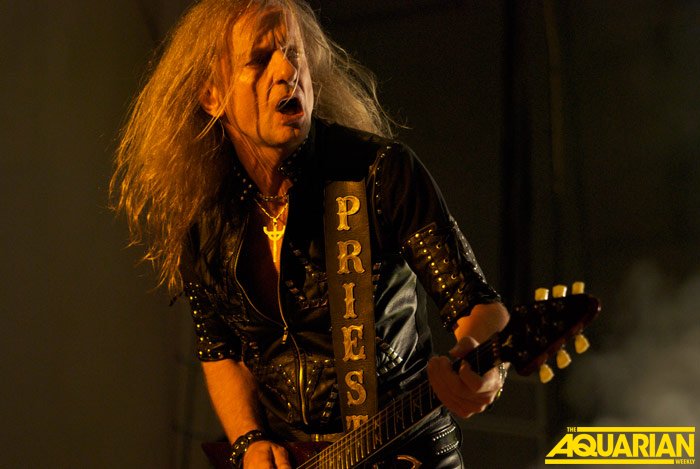 Judas Priest were the main event, however, and the Arts Center quickly filled in as they took to the stage, with the lighting rig not 20 feet above Scott Travis’ drum riser for the entirety of “Rapid Fire.” The rig was then pulled up to reveal the British Steel art backdrop. Awesome. Thirty years on, they performed the album flawlessly, and Rob Halford was in amazing vocal form, even if he wasn’t exactly showing off (he spent much of his time pacing near the back of the stage). Grumpy or not, he and the band powered through British Steel like they wrote it this year. “You Don’t Have To Be Old To Be Wise” and “Living After Midnight” just rocked, and of course, “Breaking The Law” three songs in was a great rush of energy. Matter of fact, the elegance speed in which the live album seemed to flow was really the best sustained adrenaline rush I’d had a show in a while, even though I’m far from a diehard Judas Priest fan.

After the British Steel set, they played three more songs, including “Prophecy” from last year’s heavy-handed Nostradamus album, before the three-songs encore. Because “Breaking The Law” was obviously already done, “You’ve Got Another Thing Coming” was even money as their closer, with Halford perched on the Harley motorcycle, as expected, to great fanfare. Heavy metal, man. It’s the best.