NEW YORK, NY—If a mere few words could best sum up the ethos of Tower Of Power, affectionately known as T.O.P., they would be East Bay Grease, the title of their debut record in 1970. It salutes their origin and the fact that they have the punch and ferocity of a well-greased muscle car cruising the streets of Oakland. It’s one of the most dangerous cities in the U.S. to do so, but then this band is quite a threat as well. Forty-two years after being founded, the guys are playing in top form, although not moving around on stage quite as much as they did in their 20s, especially at the crowded but intimate setting of BB King’s.

This is a band that’s all about the music. For minimal visual effect, the horn section will occasionally sway their instruments in unison for a few seconds, which helps to punctuate their lines. During a minute or two of one song, baritone saxophonist “Doc” Kupka does a frantic and funny dance. Other than these brief excursions, there’s little in the way of any real “show” elements. Larry Braggs talks to the audience only a bit, which is all that seems appropriate. Original members Francis “Rocco” Prestia (bass) and David Garibaldi (drums) make a highly formidable and admired rhythm section, and lay down an intricate foundation for everyone else to perform over. Garibaldi can hardly be seen behind his good looking, custom Yamaha kit and array of shiny cymbals, and Prestia is at the back of the stage, just to the right of the drums from the audience’s perspective. It’s clear that he’s concentrating intently and hardly moves, as his job is quite demanding. He’s a quiet and rather shy man anyway, so this surely suits him fine. While this dynamic duo is behind the others in physical placement, it’s them that propel everything. They’ve both said that they instantly meshed together extremely well upon first getting together, and continue to have a musical relationship that’s mutually very special. 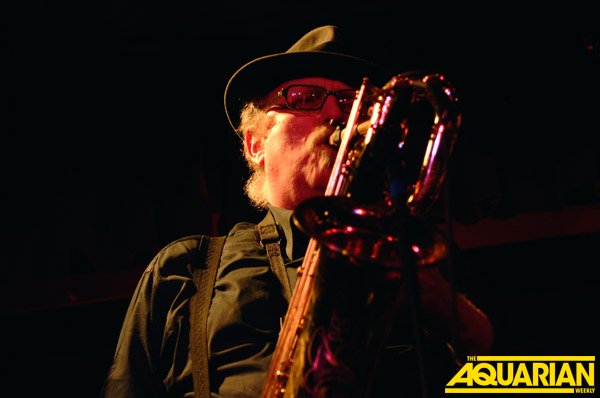 The fine vocals of Braggs, soulful playing of Hammond B3 organist Roger Smith and the sharp, syncopated five-piece horn section complete the rest of the package. Everyone executes their role superbly. The horn section has a niche to the extent that it’s been in demand for decades as record session players, covering a variety of music types. Most of T.O.P.’s compositions are written by second tenor saxophonist and founder Emilio Castillo and Stephen “Doc” Kupka, who was the first to join Castillo’s group. From their first record until 1995 when he left, most of the arrangements were tastefully done by trumpeter and flugelhornist Greg Adams.

BB’s has a limited but sufficient lighting rig, and their technical staff knows what they’re doing. The sound was crisp and well-mixed. The latter is dependent on the act’s own sound person, as they almost always bring their own to control the house mixing board. If one is sitting right in front of the low stage and to its side, they will be in front of a bass woofer, which is pushed to the front. It can be unsettling with all those very low octaves coming at you. It’s not that bad though, and the real (and probably younger) fans will literally stomach it with no complaints.

There is a certain degree of “sticking to a formula” with this group, but it should be stressed that they excel within their framework. Their identifiable sound is in good part due to their powerful and distinctive horn playing, which was very much on display. A few of their slower songs are included live to counter the more often employed funky, up-tempo material. It’s during the slow stuff that a vocalist is most exposed and tested. This group has had many singers—all of them black, by the way, except for Tom Bowes who was in during the late ‘80s through the mid ‘90’s. Chicago born and bred Braggs is as good as any, if not better, and fits in very well. He joined the group in ‘99 as a temporary fill-in, but earned a permanent position and has lasted longer than any singer yet. He’s said that this is the toughest band that he’s ever sung with, because of their complex arrangements, often speedy tempos and tight grooves. This is not a loose band that improvises on stage, despite coming from the Bay Area during the heyday of jam based groups, personified most by the Grateful Dead, who would sometimes tune up for a good twenty minutes before even starting their first song.

With a constant five-piece horn setup, this band is in a category mostly reserved for jazz groups, although elements of jazz will inevitably be found in any outfit with a horn section, especially before the slicked-up and more commercial minded ‘80s. The other most well-known horn-driven bands are, of course, Blood, Sweat & Tears and early Chicago. T.O.P. is funkier than both and has stronger soul and R&B influences, especially in Castillo’s case. (He’s a James Brown fanatic.) I feel that their best music was certainly made in the first seven or so years following their formation, when they were recording for Warner Brothers Records. (Only their debut was on a different label, that being San Francisco Records, which was partly owned by the late and infamous promoter/venue owner Bill Graham.) It is indeed songs from this early period that comprise the majority of their show and are clearly the most popular with the fans. Perhaps their most treasured song of all is the mighty “What Is Hip?,” recorded in 1973. It has a killer bass line and drive, and is my personal favorite. It was composed during a golden age for soul, R&B and funk, and in some ways for the country at large. The song’s insightful lyrics and sophisticated musical chops not only reflect the changing and memorable times that it came out in, but it also captures the band at their very best. Fortunately for them, they still get to be hip in several parts of the world as they make a respectable living touring virtually every year. So if you didn’t catch them on this trip and wanted to, you can grease and power up the next time around.