ASBURY PARK, NJ—Weird night for a show. The Tuesday after Memorial Day weekend is usually more for hangovers than yet another concert, but Living Colour has a new release out, The Chair On The Doorway, and picked the Stone Pony in Asbury Park for that first “let’s test the set in a club before we take it on the road” gig. So, ya hadda go. Once more unto the breach…

So a crowded but not as packed as it might have been Pony got to see a band that for many, was one of the best products of the 1980s hard rock. Those who visited The Green Parrot in Neptune may have caught them early on. The late 1980s saw Living Colour explode with the release of Vivid. “Cult Of Personality” won the 1989 Grammy for Best Hard Rock performance [whatever that is] and the song is planted firmly in rock radio’s playlist soil, to be overplayed forever. Which is fine; it’s a great song.

I got to see them slay at the first Lollapalooza in 1991. They were the band to beat that day. An angry, thrashing set that had the crowd airborne and kicking up dust that still hangs over Waterloo, NJ. The Rolling Stones grabbed them to open the Steel Wheels tour, many in attendance had caught them at one of those and wanted to see them again.

So, is Corey Glover still in spandex? No. Sheesh, the 1980s are now 20 years gone. [Wow, they are! Yow!] Corey looked positively jaunty in head-to-toe black sweater, cap, and shorts. Vernon Reid was there to play, and the guitar geeks [here!] were there to see the man play. Vernon is what you would describe, in technical guitar terminology, as fucking amazing. 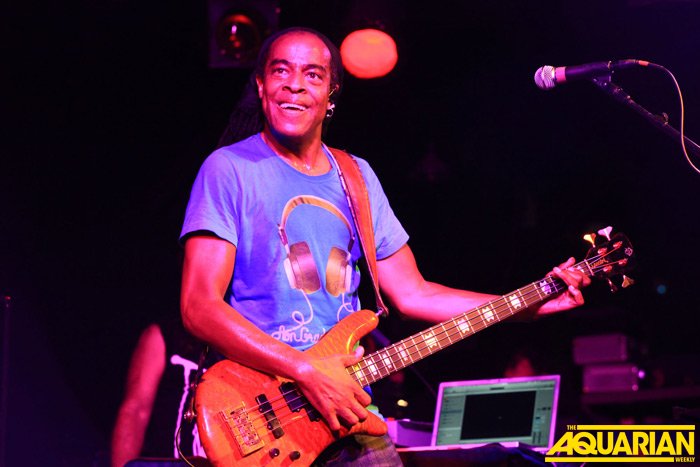 Gear City! bass-meister Doug Wimbish had a pedal board that the Spinal Tap directors would have dismissed as overkill. Vernon had a bank of effects, laptops, Kaossilators… Even Vince Calhoun had mucho electronics. Honestly, from the sound, they either didn’t use or didn’t need 80 percent of it. The quartet does go into some electronic jams, but for the most part, straight-ahead rock.

A set of hits and a few news ones, I had forgotten how great “Funny Vibe” and “Glamour Boys” are. Perhaps the radio could remember and play these also. The band was having a good time, Corey was all smiles and jokes, and Vernon was in love with Asbury Park’s java: “Who needs crack when you can get coffee like this?” “Cult Of Personality” and “Time” ended the 16-song set.

A cool show where the gear heads and rockers were both satiated. Great night for a hangover.