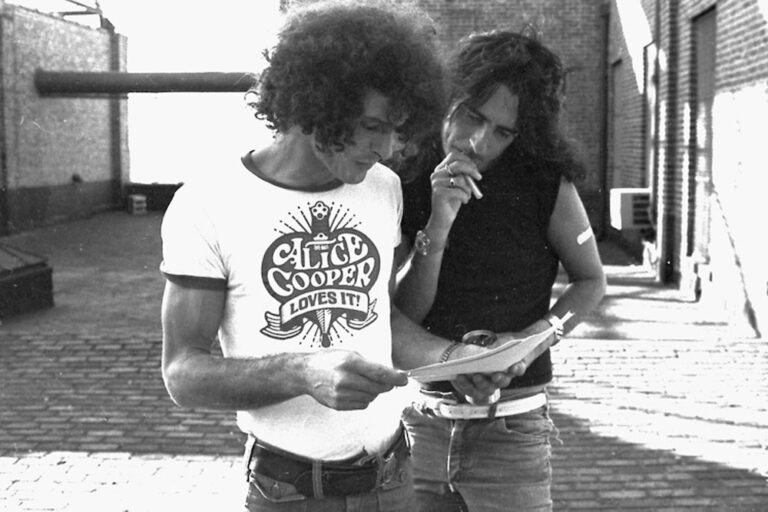 So how does a kid from Paterson have a No. 3 hit in the country with “See You In September” in 1966 as part of The Happenings? Then quit and go on to road-manage for Alice Cooper where he travels all over the world, sharing women and massive amounts of cocaine? Practically admitting he was a pig who used young ladies as objects, David Libert certainly doesn’t claim to be a choirboy. He owns up honestly to his failings. He’s upfront about his drug dealing upon leaving his four years at the top of the world with Alice. His wild memoir – Rock and Roll Warrior:  My Misadventures With Alice Cooper, Prince, George Clinton, Living Colour, The Runaways, And More… (Sunset Blvd Books) – is a thrill ride wherein the reader goes backstage, in dressing rooms, in hotel rooms, on the private jets, and even in bed, all the while making sure to get good and coked up.

You have to give Libert credit for such brutal honesty – making yourself look bad to tell the story properly is a good thing. Thus, this is one of the better rock memoirs of recent vintage. The reader, for instance, will see some sides of George Clinton – the mercurial, unpredictable-yet-savvy P-funk Mobster – like never before. Alice, for his part, comes off as Mr. Nice Guy, eschewing drugs (but not women) in an effort to be just one of the guys, and one of the sweetest bosses a kid could possibly have. Prince, on the other hand… well, let’s just say his Purple Majesty provides yet another fascinating chapter in a book filled with fascinating chapters.

When Alice Cooper plays Rio De Janeiro, Libert falls in lust with a Brazilian girl, the daughter of Brazil’s Minster of Finance. She takes him home with her, then visits him in New York City months later, smuggling an ounce of pure Peruvian flake in a thick, plastic hand-held mirror, worth $100 in South America and $2,000 in Manhattan. He has no idea until she gives him a hammer and tells him to smash the thing open. They go to Fire Island to sell it. “Being the shallow, self-serving, callous womanizer that I was,” writes Libert, “I was simply incapable of experiencing or reciprocating the depth of Maiza’s feelings for me… I suppose I could blame the music industry in general, or simply being on the road for so many years, in shaping my feelings toward women. It was simply too easy to seduce many hundreds of spectacular-looking women. I was like a kid in a candy store. I couldn’t get enough.”

Libert lasted four years with Alice Cooper and remains friends with him to this day, enough to get Alice to write a quote for the book’s back cover which reads in part, “If the fires of insanity were burning, David Libert was fanning the flames. Every morning’s flight began with roll call and the `ball scores.’” Coop ain’t talkin’ ‘bout the result of the previous night’s Yankee game. Libert kept a tally of who balled who after every show and even embarrassed the boss on occasion.

As for his being personal manager of Parliament-Funkadelic, George Clinton calls him “Mission Control for the Mothership.” Runaway Cherie Currie calls out his “ruthlessness in business and his epic Hollywood Hills parties.” Keep in mind these Runaways were a band made up of underaged girls partying, drinking, and drugging like sailors on leave. (I can personally vouch for that.)

After climbing to the top, falling back down, resorting to selling drugs, making his way back to the top, then down again, then selling drugs again, David Libert, indeed, did a stretch in the joint for almost two years. His prison remembrances are mostly positive. He read, wrote, maintained a job on the inside, knew to fight back when fucked with, and made the most of his time before getting out early for “good behavior.” What he did next, though, was surprising.

Libert can write. More than just a “first we did this and then we did that” kind of book – he’s engaging, witty, and oftentimes hilarious.