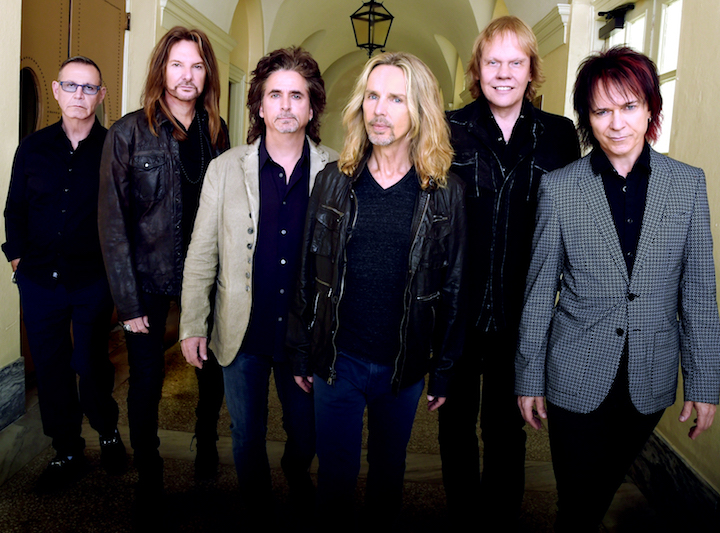 STYX, Coincidentally, Made The Most Meaningful Post-Pandemic Album Before The Pandemic Even Hit

When sitting down with STYX’s Lawrence Gowan for a conversation about all things music, you get so much more. The frontman for the legendary band shares wisdom, spills on studio insight, and reflects on what a timeless group STYX continues to be.

Lawrence Gowan was adamant in explaining to me that Crash of the Crown, STYX’s 17th studio record, is not a concept album. There is, though, an element of harmony in not just the musicality of each song on this record, but the message it’s putting forth. Therefore, if you want to pinpoint the overarching theme and connect it deeply with your own life, you can. If you merely want to enjoy the addition to STYX’s robust catalog in a casual sense, you can do that, too.

The melodic classic meets progressive rock group worked diligently both before and during the pandemic to make this album cohesive, meaningful, and balanced. Getting the right sounds from the band members’ individual instruments, carving lyrics out that could speak to one’s soul, and finding a sense of relatability within the idea that something wonderful can come out of something tragic was the goal. And this Friday, June 18, you will see first hand that it was wholeheartedly achieved.

Let’s talk about Crash of the Crown. Right off the bat I need to know a bit about how this album title came about. Your last single is the title track of the same name. Did you know from the get-go that this song, and it’s respective name, was going to be album title worthy?

The last thing that came was the album title. The song, though, came long before it became the album title. I think the song encapsulates a lot of the thematic material that runs through the entire album. You may have noticed that there’s a kind of a theme that’s focused on renewal that runs through the record. It’s particularly a renewal after a great fall or a cataclysmic event, you know? Then we focus on the opportunities that can certainly arise from such a disaster. That probably sounds very familiar and very relatable to a lot of people on planet Earth right now. Although Crash of the Crown was written before the pandemic, as we finished it off in the studio, we realized people will think we wrote this during the pandemic as it does tie in very well with a lot of the feelings of right now. I think you can personalize a lot of the lyrics of the song to your individual experiences of growing outside of current events.

I didn’t know that it was written prior to the pandemic, but like you said, it’s very relevant. I would almost think that it was fate to have come about during this time.

Yes, and that’s okay! This answers your first question, as well, what is a sensical release during the pandemic? It’s funny because that song, [“Crash of the Crown”]  started to sound like the title of the album. The crashing of this crown is definitely there. It’s just a coincidence, but it only just occurred to me that in Spanish, the word ‘corona’ means ‘crown.’ That’s really just an odd coincidence and we can send people down that rabbit hole if they want to go there, but the crown, in this case, is more symbolic as the apex or the highest achievement that has suddenly been removed. I think the crown here is more like if you picture a mountain and you slice off the top. Now you’ve got a volcano and sometimes that volcano can force all kinds of terrible things into the world, but all kinds of great things can come, as well. You can make new things that you couldn’t have before, produce something never seen before. So that, to my mind, is what the narratives in Crash of the Crown are speaking to.

That’s a wonderful message within such an intricately crafted song about this sort of orchestrational rebirth.

You hit the nail right on the head. I mean, that could be the headline of the entire article right there! You have this rebirth through music that you can personalize. That’s the main thing about any great song: somehow you can relate it into your own life and have it live in your own personal narrative. It makes sense and I think those are the songs that last the longest. You know, I think STYX are just brimming with songs like that. Even when I joined the band 22 years ago, they had songs from 20 or 30 years before that. I liked them and all, but then when I started playing them live, I was like, “Oh my God, this is my life!” You know, I mean? It suddenly takes on a whole different meaning to my own existence…. And it’s not just on stage for me! I can really sense the lyrical content is speaking to my own life and I can see that is also reflected in all the individuals in the audience and then my mind goes further with that knowledge, too.

How marvelously connecting – I can’t wait for people to experience this record and all of that. Speaking of the album, what was it like not having the full ability to record in as comfortable, as rocking, and as collaborative as usual due to the pandemic? or because these songs were written before, was it not as bad as it may seem?

It was both an obstacle and an opportunity for equal measure. I think that kind of connects to what we’ve been talking about. At first it was like, “Oh no, what are we going to do?” because we had already recorded a little under 2/3 of the album. I had done my parts to that point and Tommy was just going to come to Nashville to start putting the rhythm section together with Ricky and Chuck, and then suddenly you have to stop it – and we’re not playing those gigs we had next week either! We had a show the very week that everything shut down. We were really on a high, because we were able to play at the Beacon Theater in New York right before all of this. It was a sold out night and we played The Mission in its entirety. We were really excited about bringing that to Vegas next and then getting into the studio to finish this album, putting it out in the summer, and just all these things were kind of on the agenda.

Much like everyone else had an agenda that suddenly had to be shelved, so did we, but as we got in about five or six weeks into this new reality that the world was facing, we realized, “Ok, we have to embrace these new tools that we have; Zoom calls and the app Audio Movers.” The fact that Todd is one of the greatest drummers and has one of the greatest studios in the world where he lives in Austin was amazing. He had said, “This is actually good. I can record my drums here, where I have my clinics and do all the drum tutorials,” (that he does around the world). Then to myself, I realized that I have got this great studio apartment here in Toronto. I’ve got my Steinway and all my old vintage keyboards and my Mellotron. We could record this stuff and we can all be on a Zoom call together and use Audio Movers. Tommy would be sitting in Nashville, listening to me playing in the Toronto studio right through the speakers. It wasn’t like I had to finish the part and send it to them. It was simultaneous with Zoom. Within a month of recording like that, it became so second nature. It felt like we were in the same room, although we were not. I got so accustomed to talking to the screen between takes, and quite honestly, I think it was a benefit to the multiple.

That is so exciting to hear. The ability to still be comfortable within your art and those you are working with, especially during such uncomfortable times, is wonderful. And to create something so full of life? Wow.

There’s an expression from long ago that says how sometimes decades feel like centuries and sometimes decades feel like weeks, meaning that they are the same as if nothing happens for a hundred years. Then suddenly there’s a decade where it just feels like a hundred years of public cancellation happened within those 10 years. We lived that and technologically it was important for us, but it also showed how people reassess their lives in a lot of ways throughout a short period of time like this past year. It’s almost like we advanced decades of our lives, even though it was only one year, because we advanced our thinking. There are the obvious advancements of technology and how we were able to incorporate that very quickly into our lives to keep going and build those seismic shifts, but emotionally this all really had far reaching effects that went beyond the one year when they all happened.

That is so wise. Thank you for sharing that, Lawrence. I’m just thinking now about how the last original album STYX released was a critically acclaimed masterpiece and actually features one of my favorite songs of all time – “Radio Silence” off The Mission. Did you or any of the guys feel any pressure going back into the studio to follow up such a beloved piece of work?

After The Mission’s successful release, we started seeing reviews from  people who were putting this album in the Top 10 Styx albums of all time, and on some lists, equating it in the top five. You suddenly have a boost of confidence and a boost of self doubt. You’re worried, wondering, “Oh, was that a one-off? Maybe that won’t happen again,” but then the confident side of you kicks in and goes, “Oh, now you have got the wind on your back. You can go a lot farther if you continue down this path and don’t let things disintegrate before creativity can take hold.” That was the spirit, ultimately. We only played The Mission in its entirety in 2019 pretty much, but when we did all over, we saw from the start that the audience was embracing it. They were really embracing this one brand new piece by this band that’s been around for nearly half a century.

Now that you have seen the response of one album you fans loved wholly and truly, I’m wondering if you have any songs off this Crash of the Crown album that maybe you are most excited about getting the chance to bring to life on stage? Being that The Mission had a wonderful time being performed cover to cover, do you feel that you will just do the same with Crash of the Crown? Or are there certain songs that you want to highlight more specifically?

Well in fact, that song, “Crash of the Crown,” I am looking forward to the most. Playing that will be great because of the reaction we’ve had from people already. Also, the fact that it was kind of funny. I saw Styx yesterday post on social media that some Styx cover band from out in California, Trinity, I think, did a live on Thursday and played “Crash of the Crown.” I think that this is the first time in history that a cover band has beat us to the punch! I sent it to all the other guys. I said, “Look at this!” That sort of sharpened our resolve to play that one early on.

STYX’S CRASH OF THE CROWN IS OUT THIS FRIDAY, JUNE 18, ON ALL STREAMING PLATFORMS!