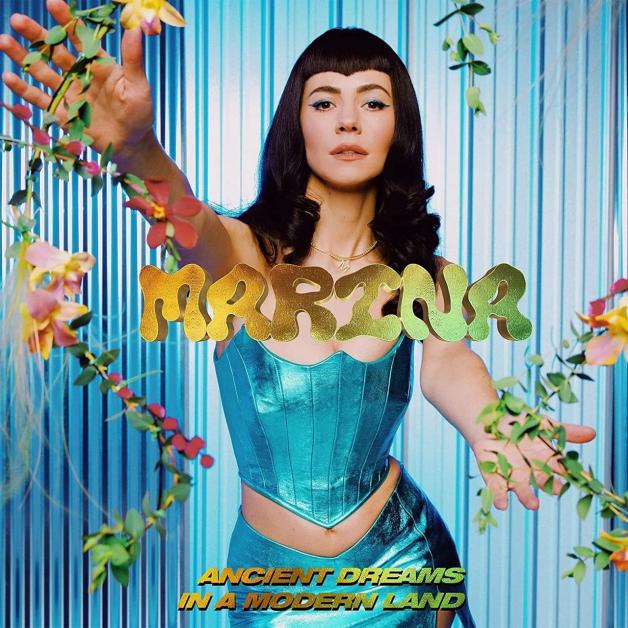 The Thematic, Theatrical High Note That Is MARINA’s “Ancient Dreams In A Modern Land”

By 2012, Marina Diamandis had fans singing, “Got a figure like a pin-up, got a figure like a doll. Don’t care if you think I’m dumb, I don’t care at all,” and “Primadonna girl, all I ever wanted was the world, I can’t help that I need it all, the primadonna life the rise and fall.”

Almost a decade later, the consistently feminist, but formerly tongue-in-cheek popstar has shifted the girl power narrative. Instead of crooning and swooning about a dream life with a dream boy and dream looks, Diamandis is using her confidence to assert the power she has always known she has.

Now, in 2021, the star has the world singing, “Quarantined all alone, Mother Nature’s on the phone. ‘What have you been doing?’ Don’t forget I am your home. Virus come, fires burn, until human beings learn from every disaster – you are not my master.”

MARINA, formerly known as Marina and the Diamonds, shot onto the electropop scene about 11 years ago and quickly made her mark as wise, outlandish, and bubbly. The Welsh musician filled a niche that was not necessarily needed at the time, but was surely wanted. The early 2010s were the modern peak of pop music, especially on the ‘beautiful, marketable female’ end of the industry. Radio airwaves, early days of streaming, singing competition shows, movies, and more were infiltrated with pop stars or the adjacent of such.

Think back to this time in the world, the 2008 to 2014 era of entertainment. There was the Katy Perry, Lady Gaga, and Selena Gomez’s of the world taking lengthy strides into mainstream pop culture. Shows like Gleeand movies like Pitch Perfect were in the midst of creating more hit songs than hit stars. Social platforms such as YouTube were paving the way for global sensations like Tori Kelly, Rebecca Black, Alessia Cara, and Charli XCX. Television shows like The X Factor were producing pop prodigies seemingly overnight, too, with Cher Lloyd, Little Mix, Camila Cabello, Bea Miller, and more going straight from the small screen to the hearts of music lovers everywhere.

Marina and the Diamonds stood out, though. She took a small piece of all of her lifelong influences and everyone she was a fan of at that time in the music industry and threw it into a blender. Alongside a hefty cup of originality and a dash of inspiration from David Bowie, Diamandis perfected the recipe for the sweetest, most eye-catching, and earworm-making pop music career… and she did it all by herself.

Every era of MARINA has been a whirlwind of fashion, production, theatrics, vocal ranges, color schemes, and awareness. Since her start, she has kept girl power at the front of her mind and the basis of her songs. Sure, many of the lyrics were based around fictional characters and their mesmerizing lyrical narratives and stunning visual image, but they had heart. Hits like “How To Be A Heartbreaker” during the Electra Heart era of her career come across as a cheeky number about girls chasing boys. The accompanied music video drives that idea home with a slew of undressed, model-esque men gracing the screen alongside the giddy, exuberant performer. In actuality, though, the song places the power of any and all romantic relationships into the hands of the female.

Diamandis uses the danceable, pop banger to show women that they, too, can assert dominance. Women can also play to their strengths in a socially cognizant way to get what they want and what they deserve. Anyone can be the puppeteer in a relationship, but rarely do women have access to the man’s strings, but this star outlines exactly which strings need pulling – and which buttons need pushing.

Clearly MARINA has evolved, though. She dropped the Diamonds from her stage name and used the pandemic-caused lockdown to let her gray hair grow in without fear. More importantly, though, she shifted the outlook of her lyrics, furthering their message and evident ambition in a much more socially sonic and culturally dynamic way.

Ancient Dreams In A Modern Land is MARINA’s fifth LP. Electro-pop is her home, her niche, and her place of comfort. In order to blend what she knows with what she loves, she had to maintain her sound upon this career evolution. MARINA still sounds the same, regardless of the maturity of her lyrics. The musician’s effortless vocal abilities take you on a roller coaster once again with a rich tone, feather-light high notes, and implementation of personality within her annunciation. On the surface, there is little contrast and much comparison from one Marina and the Diamonds record to one MARINA record. Simply jumping into the shallow end of the pool of this record, though, gives way to the growth this star has had come this release.

Bolder than ever, Diamandis proves that everything she has ever said meant something, even if nobody really listened. Now, she’s demanding that you listen. It’s not quite protest music, but it’s absolutely a theatrical, accurate portrayal of 2020s culture through the lens of a feminist musician, broken heart-wielding artist, and determined human being.

At full attention, MARINA tackles current events with a ferocious tenacity. Newfound freedom and more time than ever to focus on the present gave way to the morals, values, messages, and meanings behind every single track on this new record. All ten songs are precisely unfiltered, an expert oxymoron telling the unbelievable, but too true tale of the world we live in.  Here we have Marina Diamandis, a 30-something pop icon whose success as a singer, songwriter, and borderline sex symbol transcends decades and took her stardom overseas time and time again. Yet, her voice is as squashed as everybody else’s in an age of global pandemics, damsels in distress, oversaturated and overproduced media, questionable (or should be questionable) social norms, and the overheating planet it all occurs on.

Ancient Dreams In A Modern Land, like the name states, is about learning to be up with the times. This phrase no longer means something as frivolous as knowing what ‘LOL’ means in a text message or who won the latest season of American Idol. Nowadays, being up with the times means understanding exactly why the #MeToo movement is happening and why metal straws are all the rage. MARINA is, in fact, up with the times. This album is progressive and has ten songs to showcase that. One after another, hit after hit, each revolutionary track dives further and further into the dangers of living in an advanced society with an out-of-date mindset.

There is a clarity in the star’s mezzo-soprano voice that warms everyone’s hearts. She’s not just having fun as an artist anymore. MARINA is opening up a can of society-critiquing worms that should never be closed. Having her level of talent and her kind of platform makes Ancient Dreams In A Modern Land a period piece, as it instantly reflects the state of life we live in; a life where we are stuck in quarantine, dwelling too harshly on our past, and going to therapy to make peace with our place in the world. Every song is a female empowerment anthem in some way or another – and it’s obvious now.

From hit single “Man’s World” to “Flowers,” the forward-thinking performer is now comfortable with being in-your-face about the harsh reality of society and standards and health and race and defiance through shining, glittering, whimsical, and pertinent pop tunes.

ANCIENT DREAMS IN A MODERN LAND IS OUT NOW ON ALL STREAMING PLATFORMS! MARINA IS HITTING THE ROAD IN 2022, GET TOUR INFO HERE.