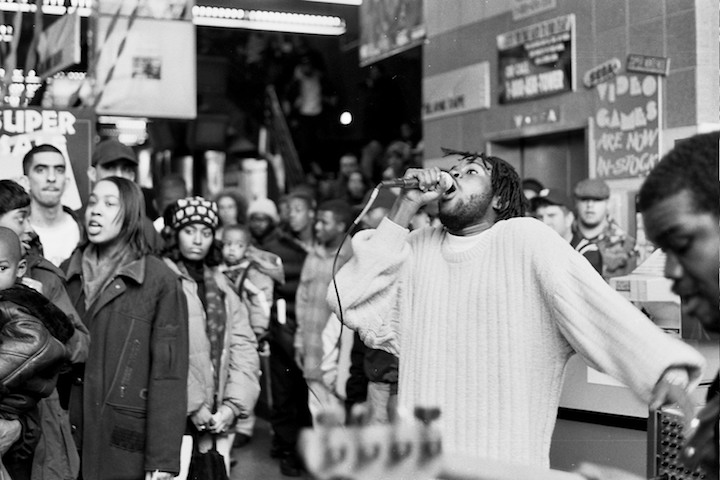 From The Rocky Horror Picture Show and Clerks to The Princess Bride and Jennifer’s Body, cult classics are often understood as pieces of underrated, puzzling, or misinterpreted pieces of cinema. Sure, there are cult classic television shows, too, such as Freaks and Geeks and Twin Peaks. Rarely, though, are albums dubbed as cult classics. That is, unless you think about the seminal 1995 record and major-label debut by The Roots: Do You Want More?!!!??!.

Whether you came to know The Roots through this record, another piece of their extensive musical catalog, or even through their place in modern television as Jimmy Fallon’s premiere house band, The Roots are a much bigger cultural entity then it may seem. This group, right out of the gate, had a plethora of talent to show the world. This plethora of talent played right into the strengths of Tariq “Black Thought” Trotter and Ahmir “Questlove” Thompson, the founding members of the band, of whom wanted nothing more than to make music that was progressive – not just in the lyrical and social aspect, but in the genuine musicality laced throughout the songs that would have their name on it.

Each and every release of theirs has an intention and a message that was expertly intertwined within the alternative hip-hop soundscapes that were based in soul as much as they are based in rap. Nothing shows that off more than their second studio album, Do You Want More?!!!??!. Genre-defying and generation shaping, Do You Want More?!!!??! showed a world still mourning Kurt Cobain’s death that, despite that tragedy, storytelling could be done in a way that challenged audiences and the thought processes of their day-to-day life. On the surface, Nirvana didn’t do that. They were loud, grungy, and quite possibly overrated talent-wise. In actuality, what Nirvana did was expand the way that people thought art could be in terms of the emotion laced into it and the reality that could be found in eye-catching lyrics.

The very second you drop the needle and hear “Intro / There’s Something Goin’ On’,” which bleed prolifically (even today) into “Proceed,” you have exposed yourself to a style of music that was outstandingly cohesive and robust in the most simple way possible. Yet, at the same time, it’s overwhelming and stimulating to dive into all at once. That is the strength behind Do You Want More?!!!??!. Even in 2021, this needle-dropping, awe-inspiring experience is unlike any other. It depicts just what kind of trailblazers made up The Roots crew even in an age of physical CDs, radio play, and other pre-digital obstacles (that were actually never true obstacles for this collaborative, imaginative, purposefully-thought-provoking band… and it’s brand new, sure-to-be critically acclaimed reissue).

The Roots stepped up not even a year after Cobain’s death and reminded everyone that the blending of styles and introspective approach to creating – not just for yourself as an artist, but for those looking at what you’re doing – was imperative to the success you could have. Do You Want More?!!!??! put proficiency and professionalism on the map in a day and age where power chords and voice modulation was dominating, rap in-and-of-itself was getting shockingly violent, and genuine orchestration was flying far under the radar of the mainstream.

26 years after its original release and almost 28 years since writing and recording began, this newly reissued record holds up in every way. The jazz-tinged urban flow this band essentially created is just as mesmerizing to listen to that it was in the mid-1990s. Every track, every rendition, every demo, every liner note, and every crackle and pop emitted from the vinyl edition of this release symbolizes that era and how this up-and-coming progressive rap group solidified the importance of the innovation, expression, and execution done within art.

What makes Do You Want More?!!!??! a cult classic is not the fact that The Roots have had a wide range of opportunities to grow and expand their horizons both within the music industry and outside of it thanks to not only their personal talent and late-night bossman, but their literal roots in Black culture and tri-state area history. Hailing from Philadelphia and having their career take off out of New York City gave The Roots the platform they needed to be as dynamic as they were that early on in their career. Their second album is being reissued on streaming services and on physical, such as this coveted vinyl edition being discussed today, because it is in fact dynamic.

Although not everyone felt the same in its heyday, Do You Want More?!!!??! is having its moment now. In recent years, people have come to respect the early days of The Roots and the narrative that this particular record put into the universe in a time where it needed some sort of guidance as to where to go next. (It’s hard not to mention that this album only went gold in 2015 –  20 years after it first hit the airwaves. Selling 500,000 units is no small feat in the United States for a musician or band of any genre, but to be working your way up to that for two decades with a piece of music that was socially and sonically sound simply proves that all of the work that went into it leading up to its 1995 release were worth every second.)

The original edition of Do You Want More?!!!??! featured a tracklist that was 16 thrilling and chilling songs long. The 2021 deluxe edition, out now, includes so much more. There are 18 additional tracks on the most recent take on Do You Want More?!!!??!, which has it clocking in at exactly two hours and 40 minutes. These songs include unreleased recordings, demos of tracks that have yet to make it to the public, and a variety of other bonus content made back in the day, but only truly released for this celebratory, anniversary issuing.

This is all in addition to the 24-page booklet included in the breakthrough records’s physical sleeve. Never-before-seen images, track-by-track commentary, personal essays, remixes, and distinguished artistic processes are all outlined in this. This furthers the magnificence of this eclectic rap project. Between the 2008 Universal Studios fire that tore a hole in The Roots’ recording history to the recent global pandemic that delayed the 25th anniversary of this major label debut, Do You Want More?!!!??! and The Roots have had quite the ride. Now that the album is released as a deluxe edition for fans, critics, nostalgic music lovers, and the world to immerse themselves in, even more is finally getting a chance to be appreciated and highlighted. The songwriting skills, intricately crafted instrumentation, and layered production found within this integral moment in hip-hop is illuminated for today and we can’t help but adore that. Questlove and Black Thought’s revolutionary and prestigious approach to a hyper-masculine genre of music broke barriers. Period. Revisiting the record in a presumably more politically “woke” and musically open-minded time shows once again what a true stance The Roots were taking through their memorable, bouncy, extraordinarily jazzy rap record.

As semi-vintage as this album may be, a deluxe edition in this day and age allows it to be contemporary again. Within the waxy grooves of this three and four disc LP there is an excruciatingly obvious and overwhelmingly positive element of self-sufficiency.  This Philly based collective came to Geffen Records in a post-Cobain grunge world and made a name for themselves.

In today’s society, nothing is more important than independence. If you can become your own label, publicity team, editor, mixer, master and everything in between, you are better off than most. We are in an oversaturated music market with the return of vinyl and cassettes to stores and the accessibility of streaming services at an all-time high. The ability to find a niche, do it yourself, and get recognized for that is the pinnacle of authenticity, boldness, and power. From day one, that is what The Roots wanted to do with all their precisely tuned instruments, clever and socially charged jargon, loquacious vocal slow, and overarching artistic passion. With a love of music and an evident voice, this band released Do You Want More?!!!??! and made people want to answer them back with a widespread, blistering loud, resounding, “Yes!”

We do want more from The Root – we always will. In the midst of COVID-19 and smack in the middle of 2021, we got exactly that. The band’s ever-evolving catalog and slick interpretation of what genre-defying music can be like is seen and heard more than ever in these never-before-released tracks and their spectacularly raw backstories. Each and every person who listens to this record, especially in a physical sense as we did, feels as though they are sitting on the shoulders of Questlove and Black Thought as they honed in on their introspective, young, wise voices and created the magic and mystic of what would become their life-changing major-label debut – and one of the few cult classic neo-soul albums of all time.

THE ROOTS’ DO YOU WANT MORE?!!!??! (DELUXE EDITION) REISSUE IS OUT NOW WHEREVER YOU LISTEN TO AND PURCHASE MUSIC!