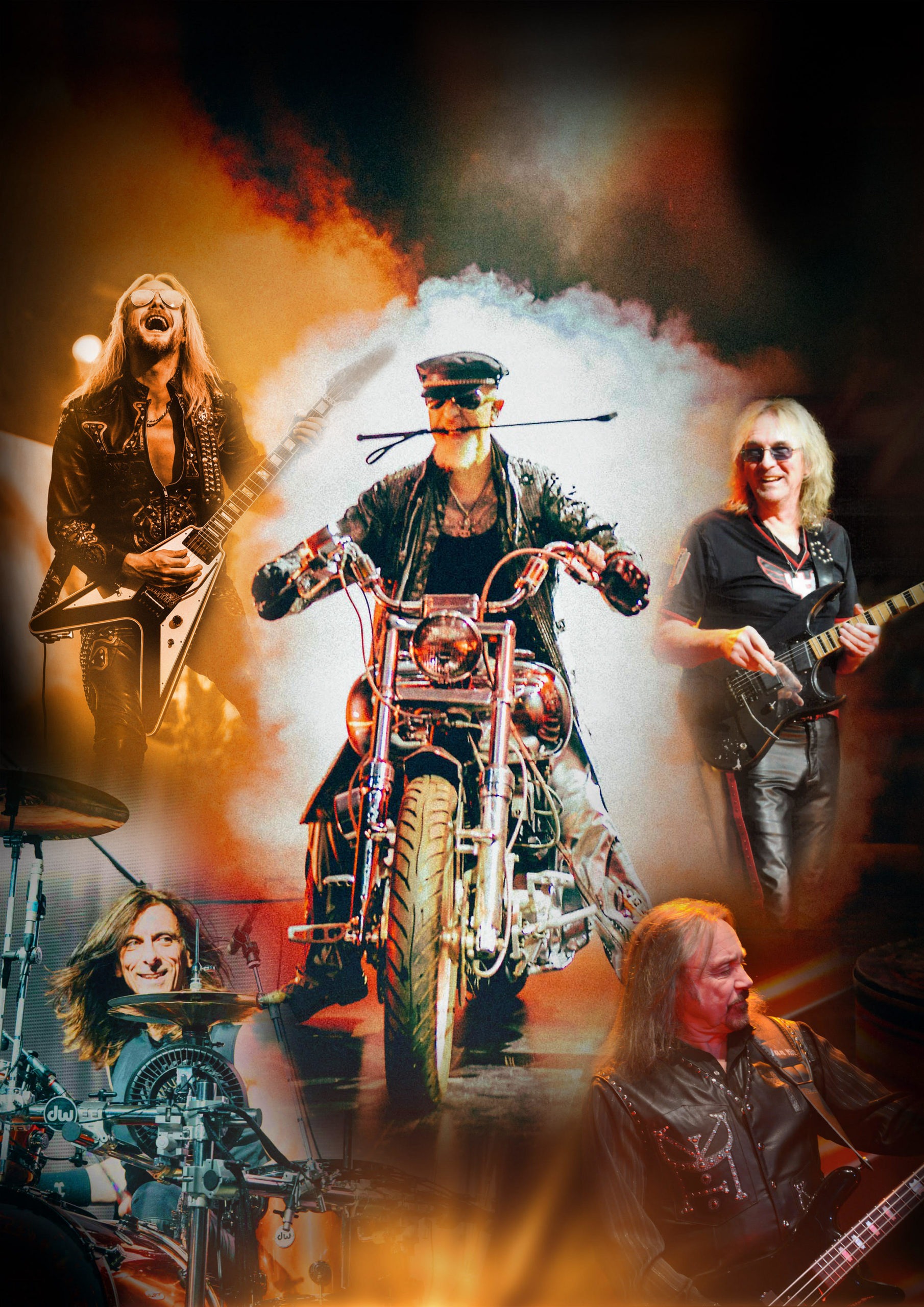 If you have ever wondered how a band who has been around since Nixon was president (Yes, Nixon.) creates a setlist for a whirlwind anniversary tour, look no further. AQ sat down (a lá phone call – we are, in fact, still living in pandemic times) with our charming friend Rob Halford to discuss just how one goes about preparing for a 30-something date tour with 20-something albums sitting snugly under Judas Priest’s studded leather belts.

According to Judas Priest frontman and all-around heavy metal icon Rob Halford, part of what makes this band so special is the “ever expansive love affair” between him, the band, the fans, the crew, the venues, and so much more. While we agree that’s a massive part of the five plus decades the revolutionary rockers have been on the music scene, we also believe that a big part of it is the warmth these brash musicians give off. Sure, they’re headbangers and mosh pit openers, but they’re also sitting at home during a pandemic cutting up pieces of paper with song titles on them to make their tour as special, inclusive, and exhilarating for the generations of fans lucky enough to attend this fall.

I can only imagine how you feel about getting back on the roll after the crazy year we’ve had.

Well, you know, the way I’m thinking about this upcoming tour is that, obviously, it’s about Priest. It’s about the celebration of the 50 Heavy Metal Years that we’ve been together, but it’s also going to be very special with regards to putting closure somewhat to the pandemic that we’ve all been through together. What I mean by that is that because all of the shows around the world literally ground to a halt for well over a year, we’ve not had a chance to see each other – including our bandmates, crew, and most importantly, our fans. This is going to be so exciting, because it is going to be a massive celebration, not only for Priest, but for the music scene. This pandemic has been potentially affecting all people within the music industry. I’m talking about the clubs and the arenas and the theaters where people come together… so many of these places have suffered terribly. To be able to get back out there again and just be with each other is going to be a very strong, powerful moment for all souls involved.

The whole event – truly each show – is going to be such a joy and such a success for every single person part of that one night. What a captivating thought that is.

It is, especially when you wrap all that up with the knowledge that we’ve been doing just that for 50 years. Debra, we’ve been doing this, we’ve been touring the world and playing shows, for 50 years. It’s just a remarkable achievement that is full of a million emotions. But, you know, every one of these shows is going to be special to each and every one. Of course, the first show in Reading, Pennsylvania, where we’re going to kick off this 50th anniversary in the U.S. – we’re going way past 11 for this show. That first gig, that first arena, I’m personally looking forward to.

We’ve had this incredible relationship with our American fans for five decades, so for any band to come back to a country where they have had such wonderful support and doing all the great things that you need to sustain and keep yourself alive…. Well, that’s what this is about for Priest. That’s going to come together in that one first show – and all the rest, as well, but this particular first night will be special. It’s like on Broadway when the first night there’s just an extra kind of special energy and excitement in the air. Kicking that off in Reading where I know Priest fans are going to be coming in from all over the world… I just think you should hold on to your metal boots for that one. [Laughs]

Gosh, are we excited or what? Not just us, though, as Judas Priest still has such a ferocious fan base here (and everywhere) as you mentioned. Why was it important for you guys to take your anniversary celebration on the road instead of just releasing your stellar five decade spanning photography book [50 Heavy Metal Years via Rufus Publications] and calling it a day?

God, I love the book. I’ve got it here right in front of my eyeballs. I love to look at all of those pictures. It’s a massive book because it’s been a massive 50 years. When I look at it, especially a lot of it, I can’t believe that it’s my life. It’s like, “Who is this guy who has spanned the globe and just been out there?” I’m still all about keeping the faith and flying the flag of heavy metal forever. I think the placing and the timing of the book before the tour really marries the whole experience together. What you’re seeing in the book you’re now hearing on tour… and that goes way back to when Unleashed In The East went out to what we were doing recently with Firepower.

That book is seeing, that is one experience. That’s one totally unique experience as each of these 50 Heavy Metal Years tour dates are going to be. If you go home after, though, and you’ve got the book and you look at the book, it just connects all the dots. It just really pieces together the heavy metal treasure trove as I call it from all of the decades. This is the exciting place that we’re at now just trying in as many ways as possible to push out the message of the story and memories behind 50 years of Judas Priest.

I think you’re doing it so well. You really put it in the best words possible: treasure trove. There’s so much in that trove to dig through and listen to. There’s so much history. There’s so much music and truly so much fun. I have to ask then, how do you go about creating a set list for a 50th anniversary tour with so much to work with?

The first thing is don’t panic [Laughs]. I have all the assignments under control with how I do it. What I do is I get all the songs together, I type out all the songs, and then I cut them up into strips, right? This might sound crazy. I’ll cut them up into strips – strips for every song from Rocka Rolla to Firepower. I just lay them all out on the big dining table and I just look through each one. It’s tough. It’s really tough, actually, because it’s that classic example of ‘you can’t please everybody.’ You can only do your best to try and pinpoint or highlight and reference certain songs. That, again, will tell the story of the band on the 50th anniversary tour. We’re still doing it now: picking through song strips. I’m sure we’ll be doing it up until probably the first show, because it’s a constantly evolving experience. If we went to our fans and asked, “Which songs do you want Priest to play? What material do you want to hear?” I think we’d probably get a list of a hundred songs to find, if not more. I think it’s inevitable that Judas Priest gets a Las Vegas style residency where we do the seventies this week, next week the 2000s, then we do the eighties. That kind of thing would work for us, because you want to show everybody everything that you’ve done, but you can’t do it with that you’ve got. We’ll just put together this fantastic, over-the-top show that we created for now for the anniversary. The production is going to blow your mind. Just as all of our tours had larger than life moments, we’re doing it again – and that’s what we love about Priest.

You know, Rob, the theatrics and excitement is what I, personally, love about Priest, too. We’re on the same page with that, outside of the love of heavy metal. The heavy metal, of course, and hard rock genre, too, have gone in-and-out of the mainstream for decades, yet Judas Priest remains strong. What about this band do you think has kept their presence alive on the metal scene – and in the music industry in general – this long?

We’ve got all of the characteristics within the band. As far as the players, each one of us defines a specific sound of metal. The way Scott [Travis] plays his drums, the way Ian [Hill] plays his bass, and so on and so forth. The musical chemistry, as we’ve always called it, is something that’s very special and unique to Judas Priest. I think that because of those components, it’s the reason there is only one Judas Priest and they’ll never be another Judas Priest. We’re a band that has many, many tributes to us all around the world, so there are many variations of Judas Priest. That’s a great statement to the important value of the real Priest, right? So the fact that we took that music from the seventies all the way through 2021 as both friends and fans, is something else. Some of our fans have been with us, too, since Rocka Rolla, which is just complete devotion. But, still, along the way, we have taken multiple generations with us, as well. It’s an ongoing, ever-growing, ever-expansive love affair that we have with having the metal network of everybody: the band and the fans, the crews, the clubs, the stadiums worldwide…. It’s just a beautiful expression of what makes Judas Priest so special.

THE 50 HEAVY METAL YEARS TOUR HITS THE TRI-STATE AREA ON OCT. 25 AT THE MET IN PHILADELPHIA, ON OCT. 27 AT PRUDENTIAL CENTER IN NEWARK, NJ, AND OCT. 30 AT FOXWOODS RESORT CASINO IN MASHANTUCKET, CT. GET YOUR TICKETS NOW!