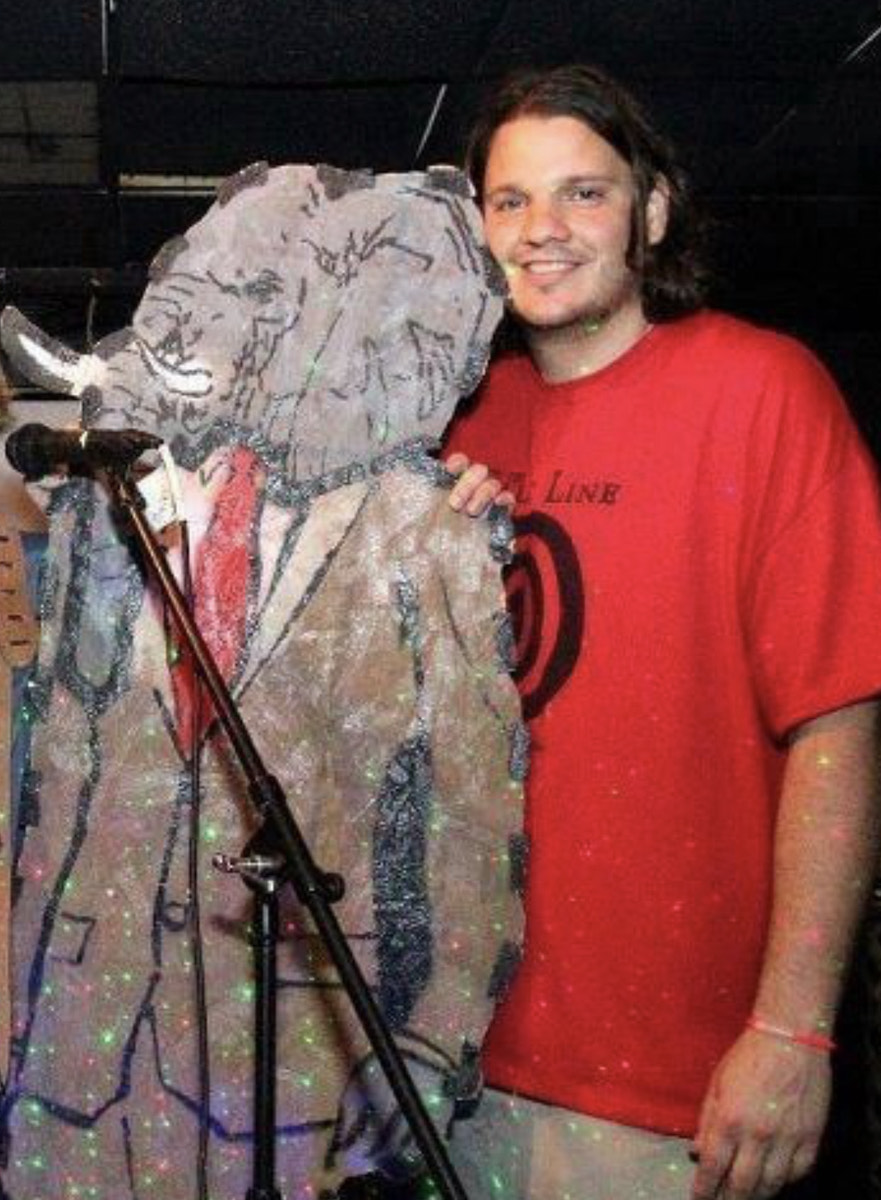 South Jersey indie rock impresario Jerry Ryan has been a tsunami of Makin Waves for more than a decade, and for that, he won the 2020 Makin Waves Tsunami Award for being the year’s biggest behind-the-scenes mover and shaker. Refusing to be stopped by the goddamn pandemic, Jerry kept on keepin’ on by raising more than $21,000 with virtual versions of his annual Elephants for Autism Festival. Inspired by raising his autistic son, Jeremy, as a single parent, the festival supports the families of children and young adults with autism.

Meanwhile, Jerry’s 12th annual Elephant Talk Indie Music Festival returns August 6 and 7 with more than 50 local, regional, and touring bands at the Watering Hole in Mays Landing. Like Elephants for Autism, Elephant Talk will raise funds for Sprouting Connections, a nonprofit that creates opportunities for special needs children and young adults. For more information, look here. For more about Jerry and Elephants for Autism, visit him on Instagram @elephantalknj.

Jerry said he has uses elephants as a symbol for his support of the local music scene and autism community because they are strong, powerful, loyal, wise, stable, intelligent, compassionate, peaceful, and determined. That describes Jerry to a tee. I hope you enjoy this chat with this wonderful man!

Where did you grow up, where do you live now, has either had an influence on you musically, and how?

I was raised in Brigantine, but I didn’t feel like I grew up until I became a daddy [Laughs]. Let me try again… I grew up between Brigantine with my mom and Philly with my dad and brother in the summer. Both places had an impact on me musically. In Brigantine, I was more of a metalhead and in Philly, more influenced by hip-hop culture. The eighties were an amazing time to be alive. From those early years, I knew I could never settle for any particular genre but wanted to try every flavor because I seemed to enjoy it all.

What artist inspired you to be involved in music and why?

I’m not sure if a particular artist that influenced me to be involved in organizing events. It was more like a group of musicians and bands from 2005 to 2009 that inspired me to bring an original music scene to the Atlantic City area. I was tired of driving to Philly and NYC to see great indie rock bands, so I decided to bring them to me and fill a need basically.

Do you play music too or remain behind the scenes?

Definitely had the interest in playing music as a youth. What I didn’t have was money to buy a bass guitar of my own, so I stuck to sports. My mom was doing too much for us already as a single mom raising three kids. I have no regrets because my best childhood friends are still in my life because of sports.

I also get to help families with special needs mostly from single parent families who struggle financially to get instruments and lessons, which is amazingly ironic.

Elephants have played a big role in what you’ve done for the last several years with Elephant Talk Indie and Elephants for Autism? Why and how are elephants special to you and these efforts?

Originally, I wanted to create a music magazine called Elephant. I was collaborating with Alex Durante at the time who was a huge King Crimson fan. That’s where the name Elephant Talk came from. Elephants for Autism was basically a spinoff of that name where we focused mainly on giving back to our local community.

Why elephants? Elephants were an easy choice for me due to what they represent/symbolize: strength, power, loyalty, wisdom, stability, intelligence. They are compassionate, peaceful, and determined creatures, basically gentle giants, who show great care toward their herd, offspring, and elders. They’ll even take in orphan elephants, who have had traumatic experiences, as their own if needed.

What is Elephants for Autism, when did you launch it, and why?

Elephants for Autism is basically a spinoff of Elephant Talk Indie created in 2012 when I realized I had a greater purpose. At this point, I had the connections to do bigger events and make an impact in both the local music and autism community.

How much money have you raised in total, how, why, and for what or whom?

I’m not sure of the totals honestly. After each event, I immediately focus on the next one. 2021 EFA virtual raised close to $13,000 though, including a $7,000 donation. 2020 was around $7,000 also virtual. Both benefitted Sprouting Connections.

What is Elephant Talk, when did you launch it, how has it changed over the years, and why?

Elephant Talk Indie was originally launched in December 2009 as a music magazine that would document my experiences in the local music scene. It quickly changed to hands-on when I realized the need for original music in the Atlantic City area. In February 2010, I focused my energy on the inaugural Elephant Talk Indie Music Festival, which included 85 bands, many of which I’ve met in the Philly, NJ, DC scenes by doing my research, attending their shows, and becoming friends. When the time came to pitch my idea to them about the festival, most shared the same vision and were onboard immediately.

The only locals on the bill in year one were Juggernaut Drunk – added that weekend – Bill Ridenour, my sound guy. It was pretty remarkable to have them all come to AC to support my vision. We had no press for the event, and it was like our very own Garden of Eden music scene, totally organic and sponsor free.

It hasn’t changed much over the years honestly, just the bands. I still try to focus on giving undiscovered talent a voice, support touring artists, and building a stronger community. I’m thankful for the indie press we receive, and I’m proud of this web of connections that was built due to this festival.

What are you looking forward to most about the 12th annual Elephant Talk Indie Music Festival and why?

Number 12 is special. Coming off this pandemic, I’m grateful to be able to do music festivals again. I’m pretty sure everyone would agree, too.

Is there anything different or new about this year’s fest?

The main difference will be the amount of sanitizer and masks available on site [Laughs]. I still want people to have the option to feel safe if they’re not vaccinated.

What do you like most about the Watering Hole and why?

What I like most about the Watering Hole is the freedom to run my own events. But, more importantly, they helped give musicians a platform to perform their original music and to be yourself. This is why I’ll remain loyal to [General Manager] Randy Beane and The Watering Hole. There aren’t many bars in the area willing to take a chance on original music. Many think the money is in the covers. Go tell that to any of the artists you’re covering.

Do you have a favorite New Jersey music act? If so, what do you like most about them and why?

My favorite New Jersey band is Out of the Beardspace from the Cherry Hill area. Amazing musicians but more importantly, amazing human beings who I’m happy to share the planet with. Their live show is jaw dropping, seriously.

You’re also a big sports fan. Which sport, team, and player are your favorites and why?

I tend to root for teams from Philadelphia, my birthplace. If they aren’t playing, I’ll root for underdogs since I can relate. I tend to gravitate to players who play with that mamba mentality and/or are labeled underdogs, as well.

Where do you stand politically and why is that important to you enough to make it known on social media?

I think most people who follow me on social media know exactly where I stand politically. It’s impossible for me to live in a bubble. I cannot live comfortably in my own privilege while others are being oppressed.

It’s important to me to use my platform to speak out openly against injustice, racism, and bigotry, among other things. My life is pretty simple. Love is my only religion. I believe in humanity as a whole. I don’t believe in flags or borders or any form of segregation or brain washing.

What will you do next within the music scene after the 12th annual Elephant Talk Indie Music Festival?

After this festival in August, I plan on combining the 12th Elephant Talk Indie Music Awards with a one-day Elephants for Autism event to benefit Sprouting Connections once again. I’m also having a birthday concert December 11 at The Fire in Philly.

Mostly, I’ll continue attending concerts and supporting local artists rather than focusing on booking them. At least for the time being. It’s a pretty exciting time for local music with all of the touring and such… like a phoenix reborn from the ashes.

How does it feel to have kept Elephant Talk and Elephants for Autism going throughout the pandemic?

I felt an even greater responsibility during the pandemic. Although I’m glad I won’t be doing these virtual concerts anymore, I’m thankful for the opportunity to be in a situation to help people and hopefully inspired others to do the same in the process.

How did it feel to win the 2020 Makin Waves Tsunami Award for greatest non-performer contribution to the New Jersey music scene and why?

To receive an award from Bob Makin was pretty special and totally unexpected. You’re a true New Jersey music pioneer. I was honored you thought of me and recognized my efforts.