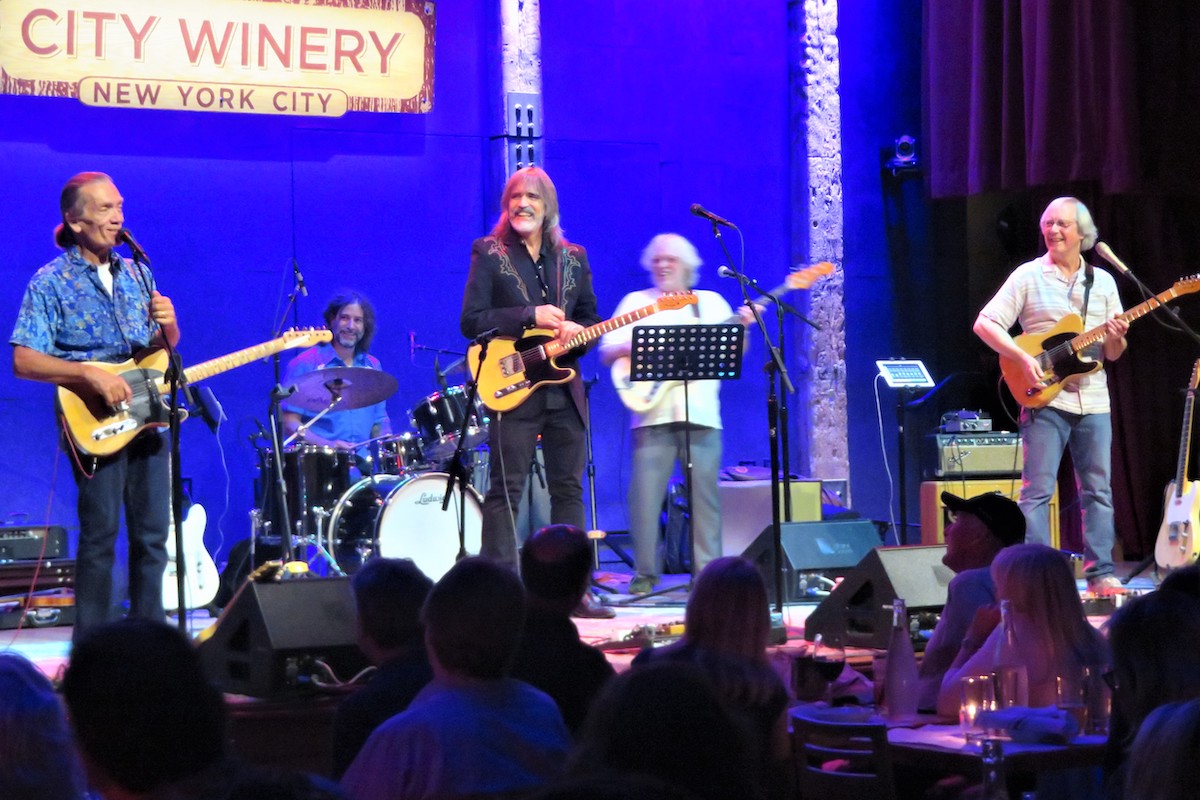 Masters of the Telecaster at City Winery NYC / August 7, 2021

Perhaps no other instrument in history has had such a profound effect on the history, style, and development of popular music as the Fender Telecaster. The Telecaster guitar, manufactured by Fender, is the world’s first mass-produced, commercially successful solid-body electric guitar. Developed by Leo Fender in 1950, it was the design that made bolt-on neck, solid body guitars viable in the marketplace. It’s simple yet effective design and revolutionary sound broke ground and set trends in electric guitar manufacturing and popular music. With its revolutionary electric guitar tone, it would change forever the way popular music was created.

The Telecaster’s sound is unusually bright and thick. Its high-tension strings and wide frets challenge many guitarists. Those who master the instrument achieve astonishing results.

Jim Weider, who replaced Robbie Robertson in the Band, assembled his first “Masters of the Telecaster” show in New York City in 2013. The first show was subtitled “A Tribute to Roy Buchanan,” the late guitarist who was a pioneer in the Telecaster sound. The concert became an annual event, which he now takes on brief tours.

The format of the “Master of the Telecaster” shows is three guitarists backed by a bassist and drummer. Two of those three guitarists are almost always Weider and his comrade-in-strings, G.E. Smith, the former music director for Saturday Night Live and former lead guitarist for Bob Dylan and Hall & Oates. Weider also invites a third guitarist, whom he often alternates from within the Telecaster community. Each guitarist chooses a song and launches into the leads, then the others offer their contributions.

At City Winery NYC on August 7, Larry Campbell was the invited third guitarist. Campbell is part of the Woodstock-based community of musicians, having played in Bob Dylan and Levon Helm’s bands, among others. Weider, Smith, and Campbell were supported by bassist Lincoln Schleifer and drummer Josh Dion.

Across two sets, the quintet played sparkling interpretations of both familiar covers and little-known songs. The song selection was not based on commercially-popular favorites, but on songs that would serve well for Telecaster solos. The majority of the set was instrumental and much of the guitar licks seemed to be improvised on the spot. Since the jams were rather loose, the guitarists often gave each other cues as to when to step forth. The audience came to hear guitar wizards play brilliant leads and majestic, melodic leads were indeed the axis of each song. Although the guitarists had foot pedals on the floor, they leaned on clean, fluid sounds with very little distortion. The crux was what the guitarists could do with their fingers, not with their feet. As such, song after song showcased tasteful, sunny extended solos. This was all the audience wanted, and Jim Weider, G.E. Smith, and Larry Campbell provided nothing less.

The Best Live Music for an End-of-June Weekend