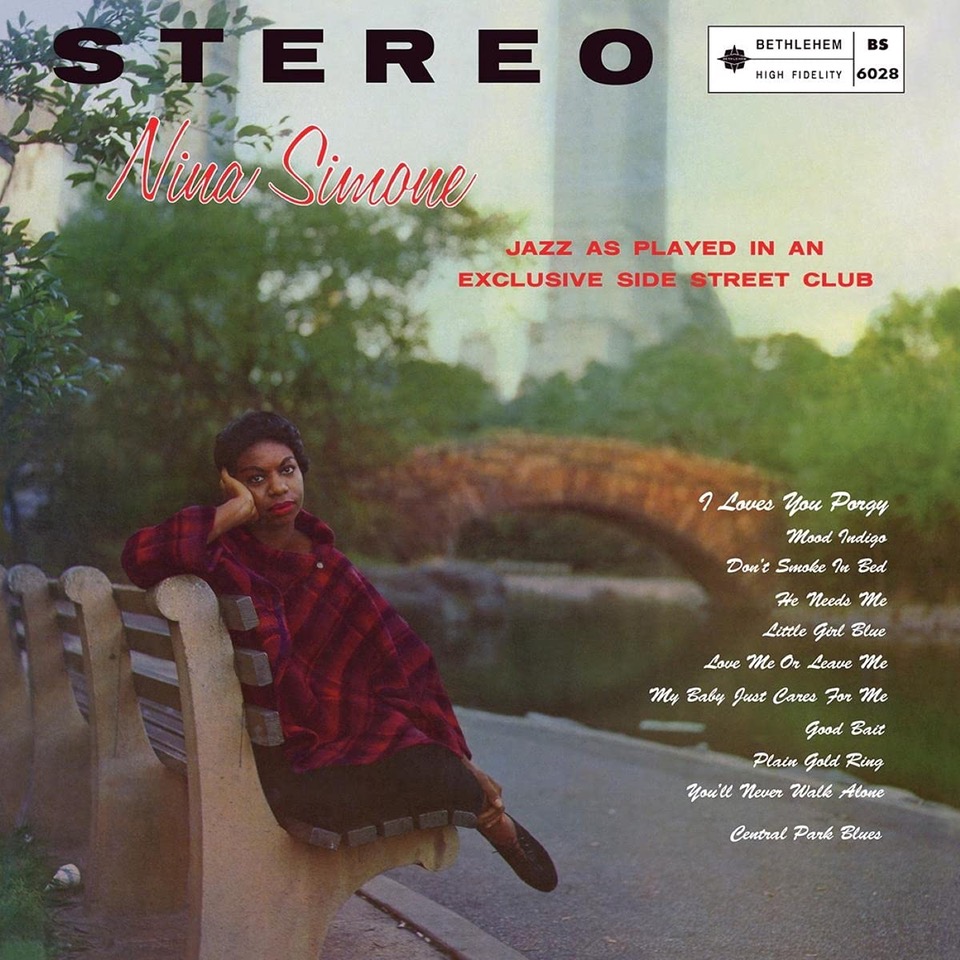 If you knew nothing about Nina Simone or her discography, the contents of Little Girl Blue would probably lead you to guess that it was at least her dozenth album. In fact, this newly reissued LP is her 1958 debut and she recorded its consummate, self-assured vocals and classical music-influenced piano performances when she was all of 24 years old. Not only that, but she completed the whole set in a single day.

This material has been rereleased before, most recently on 2018’s Mood Indigo, which features single edits of each of Little Girl Blue’s 11 tracks and a few additional selections. The just-issued edition, though, offers newly restored and remastered versions of all the original album’s full-length songs, which include her superb arrangements of ballads and upbeat numbers from composers like Duke Ellington, Rodgers & Hammerstein, Gus Kahn, and George and Ira Gershwin.

One listen to Simone’s nuanced renditions of songs like “I Love You Porgy” (her only hit single), “You’ll Never Walk Alone,” and “My Baby Just Cares for Me,” and you’ll know why Little Girl Blue is now widely regarded as a classic. You’ll also likely want more, so you’ll be glad to learn that this album – which is sometimes known by its subtitle, Jazz as Played in an Exclusive Side Street Club – is not the only recent Simone release.

Also newly available is The Montreux Years, a two-and-a-half-hour, two-disc set that collects her performances at the Montreux Jazz Festival. Its first disc delivers her entire 1968 debut concert there (the first time it has been issued in full on CD) while the second incorporates material from her other four appearances at the festival, in 1976, 1981, 1987, and 1990. The program features some numbers from the Great American Songbook, including a couple that also show up on Little Girl Blue, but it draws more than a few of its selections from the pop-rock world, which played a role in Simone’s repertoire throughout most of her career.

The so-called “High Priestess of Soul” and 2018 Rock & Roll Hall of Fame inductee does a beautiful job with the Bee Gees’ “To Love Somebody,” Janis Ian’s “Stars,” and Bob Marley’s “No Woman No Cry,” for example. Here, too, is “Don’t Let Me Be Misunderstood,” which the uninitiated might mistake for a cover of the 1965 Animals hit. In fact, Simone was the first artist to record this number and it was her mesmerizing 1964 version that inspired Eric Burdon’s group to tackle the song.

Dallas Burrow, Dallas Burrow. An album named for its creator is typically a debut, but this eponymous release is actually the sophomore effort from Texas-born Dallas Burrow, following 2019’s excellent Southern Wind. Still, the title is fitting, as it introduces a man who is ostensibly starting over: an accompanying press release indicates that he is newly sober, “isn’t cheating death anymore” and is “embracing maturity,” having recently become a husband and father.

This understated Americana CD includes lyrics that reflect those changes as well as performances that show Burrow has grown not only personally but musically. He’s a fine vocalist and guitarist and an imaginative songwriter whose rich lyrics and lilting, heartfelt songs will keep you coming back for more.

Well-produced by Austin-based Bruce Robison, the set is loaded with highlights, including the sweet “Independence Day” and “Outlaw Highway,” the sole non-original, with lyrics by Burrow’s late father, Mike. Also outstanding is the organ-and violin-spiced “Holy Grail,” in which Burrow proclaims: “I’ve been around the world, on the trail of God and song / I found the Holy Grail and it’s been true love all along.”

Son Volt, Electro Melodier. Jay Farrar played a big role in launching the Americana music movement with Uncle Tupelo (which included future Wilco prime mover Jeff Tweedy) and then with Son Volt. That group broke up in 1999, but reformed six years later and has since issued about half a dozen more albums.

The latest is Electro Melodier, which features acoustic guitar, pedal steel, and piano and sounds a lot like the band’s early albums. That’s no surprise, even though Farrar is Son Volt’s only remaining original member: those previous LPs consist almost entirely of material that he composed and sang, and he provided all the lead vocals, music, and lyrics for the new record.

Farrar has said that he wanted this CD to “concentrate on the melodies which got me into music in the first place” and “wanted politics to take a back seat this time.” He succeeds on the first count with this harmonious release, not so much on the second.

True, some of the lyrics are thoroughly apolitical (and sometimes cliched, such as when he talks about how “you can feel the earth and touch the sky”), but he does frequently address current affairs, sometimes offering only vague pronouncements about “suppression,” “pushing back at authority,” and change being “in the air.” Other times, he gets a bit more specific, such as in “The Levee on Down,” which addresses how “white man’s greed” impacted Native Americans; “These Are the Times,” which focuses on the pandemic; and “Livin’ in the USA,” where he proclaims, “We’ve all got fossil fuel lungs while we run out the clock” and “wealth and privilege buy a ticket out of jail.”

Such lines aren’t exactly profound, but Farrar’s heart is in a good place, and so is his music.

Mick Kolassa, Wasted Youth. Veteran blues vocalist and guitarist Mick Kolassa offers a dozen strong tracks on Wasted Youth, which mixes playful, upbeat numbers like “I Can’t Get Enough” with melancholy songs like “It Hurts to Let You Go” and “Feeling Sorry for Myself” that resulted from the pandemic year of 2020, during which he lost his wife and several friends.

Guitarist Jeff Jensen makes big contributions here, as does Kolassa’s horn section. He wrote everything on the record except for “Darkness to Light,” a medley that combines War’s “Slipping into Darkness,” Jesse Colin Young’s “Darkness Darkness,” and the traditional “Wayfaring Stranger.”

Kate Taylor, Why Wait!. Fifty years after she teamed with famed producer Peter Asher for her debut album, Kate Taylor has reunited with him and many of that LP’s musicians for this set, which features a much more diverse program than anything we’ve heard from her brothers James and Livingston. The 14-track album includes a couple of Kate’s own songs, renditions of well-known pop-rockers, and two contributions from family members: “Beams of the Queen,” by her nephew Isaac Taylor, and James’s “I Will Follow.”

Though Kate’s voice is strong throughout, there are some stumbles here, mostly due to lush production, a surfeit of backup vocalists, and an excessively middle-of-the-road approach. But she does a nice job with Tommy James’s 1969 hit, “Crystal Blue Persuasion”; the Exciters’ upbeat 1962 smash, “Tell Him”; and the Beatles’ “Good Day Sunshine.” Another high point is the frequently covered “The Glory of Love,” which finds Asher offering a sweet spoken intro and then dueting with Taylor.