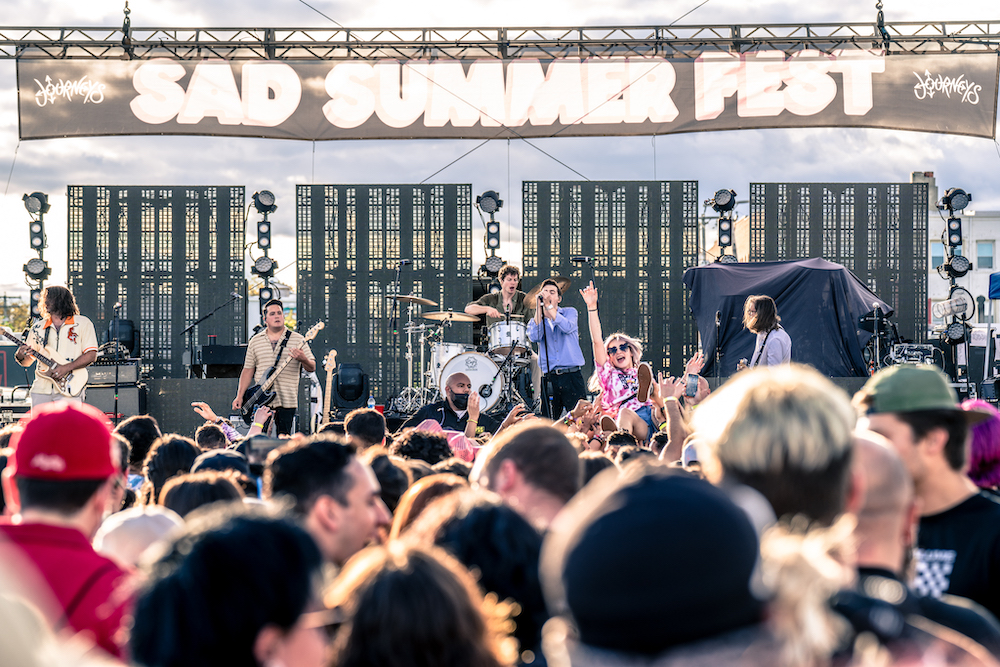 While the word ‘punk’ isn’t often synonymous with terms like gratitude, inclusion, safety, and beauty, in the ‘pop punk’ world, it absolutely is. All of that and more is what this community and their respective bands bring to the table time and time again. Sad Summer Fest, as experienced by writer Taylor Adzima and photographer Anthony Vito Cosentino, was no exception.

Emo music, crowd surfing, and cowboy hats  – oh my! On a beautiful, breezy September 3 in Asbury Park, New Jersey, Sad Summer Fest made its comeback. The Stone Pony Summer Stage welcomed back this event, which was rescheduled as many others were, making it a long time coming for fans and concert-goers who were ready to jump back into festivals.

The lineup – Joe P of Deal Casino, Grayscale, Movements, The Maine, and All Time Low -– was truly something special to behold. There were many memorable moments that made this show extraordinarily special to the fans as well as the bands. The global pandemic hit the arts hard, and each SSF act connected with the Jersey audience as we experienced live music together once again.

Due to the current health climate, there were several changes to the lineup during this tour with other bands stepping in for some of the acts that couldn’t make it. Filling the first slot was Emo Night Brooklyn’s DJ and co-founder Alex Badanes. Alex hyped up the crowd with classics by My Chemical Romance, Simple Plan, Linkin Park, Blink-182, and many more acts in the pop punk sphere. An hour-long emo hits singalong and danceathon warmed up fans’ voices for the bands to follow; priming them for the energy the true live music would create.

After the Emo Night set, the light-up pink cowboy hats that The Maine had on sale continued to trickle into the crowd, and by the time the opening act took the stage, there was hardly any standing room left. As Joe P took the stage with his band, seeming so enamoured by the eager crowd, the Sparta, New Jersey native announced that this was his first ever solo show. “We found out we were playing this show at midnight last night,” he said, later joking about running home to grab merch before the festival.

Being a fan of Deal Casino, it was a pleasant surprise that Joe P was filling in another band’s slot in the lineup. His solo music drew me in with his single “Middle Class Dream,” hearing it for the first time myself. After his set, the chorus rang in my head: “In the movie you’re the love scene / Where the camera shows you nothing / But I’m just the fly on the wall / And I see it all.” Before signing off, Joe invited the crowd to participate in one of the last songs in the most Jersey way possible: “You can sing the chorus if you want. If not, you can just tell me to fuck off, ‘cause it’s Jersey and you can do that.”

Next onstage was Philly’s pop punk powerhouse Grayscale, playing hits off their latest record, Umbra, as well as a few of their most popular songs, such as “Fever Dream,” which comes from their album Adornment. The singer was enthusiastic and charming, which led to the audience beginning to get rowdy during this set. The crowd surfers created waves. One after another they tumbled toward the vigilant security, who greatly minimized injuries at the show. All is fair in love and live music, though – there were a handful of fans who needed medical attention by nightfall.

This is where I will affectionately plug The Stone Pony’s security and medical team. Especially now, the safety and health of the fans (as well as performers) were The Pony’s focus. I require ADA (Americans with Disabilities Act) seating at shows and I cannot commend the ADA security enough for their efforts to keep every single concert-goer safe. Live music is for everyone. Shout out to the ADA seating management…. Rock on, Barbara!

“Sweet Caroline” played as The Maine ran onstage waving to the enlivened crowd. They opened with “Sticky,” one of my favorite singles off of their newest record and surely the most catchy. After the song played, vocalist John O’Callaghan yelled out, “Jersey, you’re a bunch of wild animals!” The crowd surfers then became relentless and John was the first of the night to thank the audience for taking care of each other down in the general admission pit.

The Phoenix, Arizona band took over the stage with their quirkiness, introducing themselves as Nickelback before hitting us with another terrific single from the latest album. The singer got the crowd going even harder, exclaiming how absolutely stoked he and the band was to be back in NJ. They took fan requests via social media DM before the show, and while delivering on the throwbacks requested (and I eagerly anticipated), they played 2008 classics “Everything I Ask For” and “Into Your Arms.” Long time followers of the band were unable to be tamed. Before closing out their set, the rockers commented on the beautiful Asbury Park beach’s weather for making this the best day of their tour so far.

It was just starting to get dark when the lights went up on the Summer Stage and Southern California’s Movements came out to play. Inflatables expanded on the stage that were branded with a phone number to connect with the band, too. Movements flawlessly delivered popular hits of theirs including the opening number, “Full Circle,” and closer, “Daylily.” Fans were thrilled by the performance, and when I thought they couldn’t get any more ferocious, the surfing intensified in anticipation of the headliner – All Time Low.

The only lights in the sky came from the kitted-out Summer Stage before going black as the headliner of the festival got in front of the audience for the last performance of the night. From the side stage, I caught the ATL boys running up after an entertaining Wake Up, Sunshine themed commentary bit played on the projectors. They quite aptly opened with “Some Kind of Disaster,” which has become an All Time Low fan anthem for recent times. Alex Gaskarth, frontman and lead singer, expressed gratitude to fans that were there for them, as well as newcomers, for this year’s Sad Summer. Since their last album dropped mid-pandemic, they haven’t been able to perform new songs for fans until now.

Being a veteran fan of ATL, I lit up with joy when they played their 2007 hit single “Six Feet Under the Stars.” 10+ years later, Alex, Jack, Zach, and Ryan are still as lively and animated as ever while live in concert. They also played their most recent singles, “PMA (Post Modern Anxiety)” and “Once In A Lifetime.” Midway through the set, Alex excitedly made a remark about marijuana being legal in NJ to uproarious applause. For the remainder of the night, they treated fans to songs from every era of the band, giving a little bit of something for everyone. They fake-closed the show with one of my personal favorites from Wake Up, Sunshine, “Glitter and Crimson,” and then returned to play the legendary closer and definite fan favorite, “Dear Maria, Count Me In.”

There’s a different air around concerts post-pandemic. Throughout the day, festival-goers seemed to intently drink in the music rather than scream over it, which I mistook for a lower energy crowd. I quickly realized that it was quite the opposite as this crowd was more engaged than ever with the performances given by all of the artists who graced our Summer Stage that night. The energy from the night’s acts who were passionately making their return to live music was uniquely unmatched. Sad Summer Fest in Asbury Park was an enormous success this year, so we have to say thank you to the bands who continue to take care of our home state!