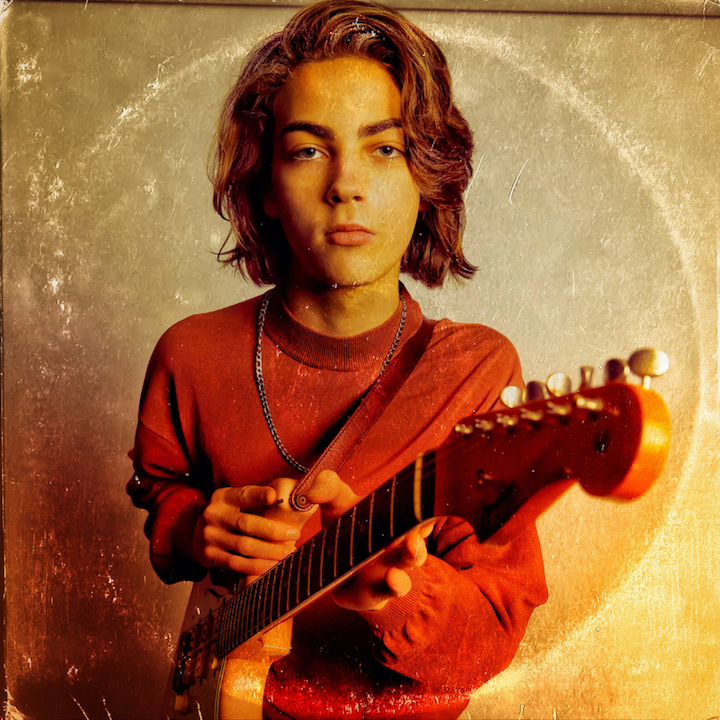 One week from today, on September 20, the name Jacob Thornton will be broadcast into the world in most grand and artistic of ways – through the release of his bouncy and eclectic, but overall rocking, debut EP.

If you ever feel yourself getting wistful and misty-eyed thinking about the glory days of substantial, raw, and original music, you’re not alone; nor are you old.

Many people think nostalgia, especially when it comes to things like music, ages you, but it simply reflects on your taste in the art you consume. Even the overly critical members of Generation Z gripe about the occasionally soulless and often manufactured sounds that are ground into every corner of pop culture and every facet of media.

Some of those Gen Z-ers are working hard to make a change, though, and are hoping that through their own creations and determination, they can allow the true evolution of music to prevail rather than that of trend-based charting. One of those young tastemakers is Jacob Thornton, the talented and prolific rockstar-on-the-rise who has one hand reaching toward the 2020s and the other holding on tightly to the 1970s.

First and foremost, we can’t get enough of your sound and style and just overarching Jacob And The Dazey Chain brand. There’s an aesthetic to what you do and it suits you flawlessly. How did you come into this semi-nostalgic, pseudo-modern sort of branding?

Thank you so much, I really appreciate that! The sound stems from my influences really. I wear them on my sleeve. I am a huge fan of the Brit-rock bands old and new – Beatles, Oasis, Smiths, Sam Fender – and great American rock songwriters like Lindsey Buckingham, a massive influence in particular, as is Fleetwood Mac and Tom Petty. All these styles went into the blender I guess. The artists who inspire me drew from their own influences as well. That is a part of what the “Dazey Chain” concept symbolizes to me – ongoing links in a long running musical chain or connection. I want to be part of that story and maybe add a unique mark to it.

You are so clearly an old soul. You surpass generations and yet fit intricately into all of them. How important is it for you to not only create music that almost caters directly to older folks, but do so in a way that makes a more youthful group of music lovers flock to your work?

My generation has been fed a lot of disposable music, but I am starting to notice that changing.  A lot of young people are searching for meaning and realize that music has the ability to make you move and think.  My generation has come of age during some troubled times, but unlike the 1960’s music, it has not driven the cultural narrative as much in my opinion. I see that changing. I see young people seeking something a bit more substantive. Greta Van Fleet gets the Led Zep comparison, but they have a lot of rabid young fans – and they play live. They’re great live, in fact.   I hope to see young people my age gravitating more towards organic music made by real human hands and voices. More guitars and big acoustic drums, and less laptop computers.

There is personality in this EP, undertones of Jacob Thornton that come across in every lyric and every guitar lyric. It’s subtle, though, and doesn’t overpower the authentic rock and roll musicality that this body of work possesses. What was going through your mind when building out this debut EP and how did the six songs chosen for it end up being on this record?

Thanks! It wasn’t necessarily on purpose, I think I just started to find my own voice last year. I’m not a big fan of revealing what my lyrics are about since that can limit the ability for people to make a song their own. I started writing not just from a first person perspective, instead trying to paint things that I see that are interesting like telling other people’s stories. Life is interesting and relatable. A common theme that runs throughout the EP is following the path that moves you, not letting things distract you from that, and taking chances but also using your power of choice wisely.

You come across as a very self-aware musician, which is impressive for being only 18. How long have you been striving for this pop rock dream of yours? Because so far your releases and your career path have been strategic and intact.

I can’t remember not wanting to be a musician. I started very young around nine.  Thanks to the Internet, I was fortunate to run into some people in the industry who offered guidance and made some key introductions, particularly veteran rock photographer Robert M. Knight, who has opened a lot of doors for many artists.

Your music comes across as Brit-pop influenced – that’s for certain. You recently created a home base in Nashville, though. What about Nashville, in comparison to London circa the 1960s British invasion, suits you and what you’re setting out to do as an artist?

I have a lot of family in Nashville. My great-grandmother owned and operated a recording studio and publishing company on Church Street in the late 1960s called Varsity Records. This EP was recorded at the Fleetwood Shack studio in Nashville last year, which is owned by Grammy-nominee Bill Reynolds from Band of Horses, who produced two of the songs. Bill and engineer Jason Kingsland taught me a lot during that week of recording… super creative guys and it just felt right. Nashville is truly about the song and serving that and nothing else, which I identify with a lot.

Clearly, it’s been a tough time to be an artist and we can’t gloss over the fact that you were just getting your footing as an artist when the COVID-19 pandemic struck. In this time, though, in the past year plus, how have you grown as a musician – even without all the opportunities that were flooding you prior to lockdowns and quarantines?

Yeah, it’s been tough and young people lost some critical development years, too. So many people lost their lives and their ability to make a living, though, so I can’t really complain. A silver lining for me was so much time to work on songwriting and cut demos. All but one of the tracks were written and recorded during lock down. I’m not sure I would have these songs and the EP without that time. The halt in the business also meant that talented people like Bill were available to work with young artists like me.

If you could suggest one song off your forthcoming debut EP for fans and music lovers everywhere to gravitate to as it maybe encompasses all that you’re doing, what would it be?

Good question. We decided to tack on an acoustic demo called “Signal and the Noise.” It’s completely raw and, believe it or not, was recorded live in a bathroom on an iPhone. The meaning of that song is pretty obvious – trying to stay true to the muse and not be distracted by all the noise. There is a lot of noise out there trying to knock you off track. You have to ignore it and follow the signal you hear. So, while the track has no production and is a simple acoustic bathroom demo, I think it represents the EP very well.  “Color Me Blind” is also one of my favorites, because it’s sort of a bridge to the next batch of songs we are working on.

JACOB AND THE DAZEY CHAIN’S DEBUT EP, THE SKY IS ALL I NEED TO GET HIGH, DROPS SEPTEMBER 20 ON ALL STREAMING PLATFORMS!