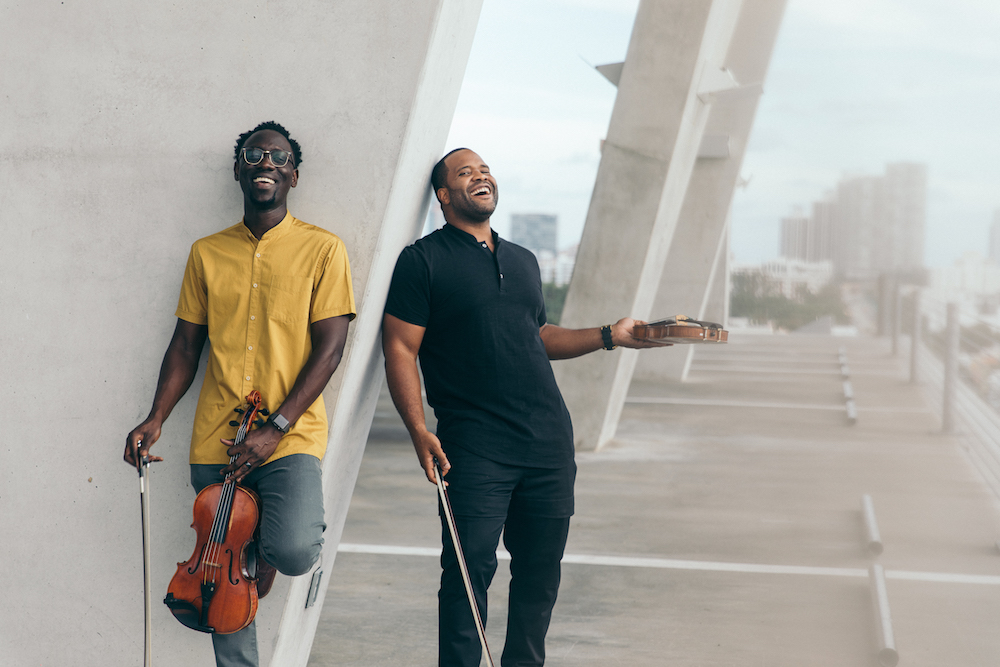 As funky as they are prolific, Black Violin are one of the few bands out there who wholeheartedly deserve the title of genre-benders. That genre-bending is coming right here to New Jersey, too, on 9/24 at Kean Stage… get excited.

If you aren’t as well-versed with the classical music world as you’d like, the gateway drug of an act for you is Black Violin. The critically-acclaimed, Grammy-nominated twosome are the real deal on the end of the genre spectrum, but they’re also one of the slickest hip-hop duos of the 21st century. The versatility that both Wilner Batiste and Kevin Sylvester both have and exude in their art is overwhelming. It pays off, though, because as they cross genre lines and hop over walls built up around each style of music, they are able to garner an even larger, even more tight-knit, and even more open-minded fan base. These people are connectivity based, socially-charged, and artists with a purpose bigger than “Impossible is Possible” or “Stereotypes” will ever be.

Wil B is as eloquent of a conversationist as he an artist. Thoughtful and discreet in both a calming and professional way, the multi-hyphenate musician tells us all about the way he and Kev Marcus – the other half of Black Violin – go about their craft. (Spoiler alert: there is no set plan or set process. They simple do what feels true to them and true to the music, as well as with the hope of uniting people and sounds, which is more than many performers can say.)

One of the things that make Black Violin, Black Violin, is stage presence and the immense, widespread, and much-needed performances you put on all over. Now you’re slowly, but surely returning to those experiences and are even coming right by us in Union, New Jersey in just a few weeks. It’s clear you have always had a stellar time playing live for people, but what does it feel like now after the year plus that we’ve had?

It feels good, man. We actually just had our first tour. It was like an eight day type around a few weeks ago and it felt good. You know what I mean? It just felt good to be on stage for the first time in like almost a year-and-a-half. Being able to do what you love and being able to connect with people and play music again and jump around on stage…. I suppose it was almost like not seeing a person that you adore for so long, as if were forced to be somewhere and be forced to be separated. It was kind of like that, and then finally you get to see that person. It was just a lot of joy.

That’s so wonderful to hear and surely a welcomed reunion. Just that energy with you two and audience must have been so heartwarming to be back to.

Absolutely, absolutely. The crowd was amazing. The show that we did a few weeks ago, the seven or so shows, we hoped that they’d be good and they was great. It was nice to do something that you love, but then you’re able to inspire [the audience],too, especially during these trying times. It was good to kind of give back in that way.

Of course. Even during this time, you two never slowed down with the inspiring, though. You shifted your approach to educating and mentoring, which are all things you have done since pretty much day one, but it became a bit more of a mission throughout the pandemic. Can you tell us a bit as to how the process of working extensively with schools came about?

Yeah. Like you said, we try to stay busy. Granted, we’re not able to be onstage and interact with individuals, but we wanted to do something. We started doing a lot of workshops online and and it was definitely very fulfilling, especially with the kids – kids that are just starting playing an instrument, too. We want to be able to encourage them to keep going, you know, because it’s hard to not be in front of other kids and be in front of people to play and practice. We wanted to inspire them and give them a sense of hope. It was great to be able to do that. It was great to just be able to do something and not just sit around and do nothing. That was awesome. It was a great experience, very warming, and one that we will continue to do.

That’s so amazing to hear. I can imagine that as much as you were teaching and having these virtual and distanced interactions with students from all backgrounds, they were also teaching you and you were also learning from that experience, right?

Absolutely. You know, one of the greatest joys in the worlds is when you can add to something. It doesn’t matter what, what it is. It could be knowledge, it could be monetary, it could be goods. Whatever it is, when you’re able to give that thing to someone that needs it, that’s where true joy lies… at least to me. I’ll keep doing that because it makes me feel happy to give someone something that deserve it and need it.

That brings me right to another aspect of Black Violin that I admire so greatly: this level of activism and philanthropy and advocacy that you guys bring to the table, whether it be through art or online. It’s a vital aspect of what you do and one of the most valuable aspects of having a platform. Some artists don’t think that way and don’t want to intertwine their personal opinions and morals and current events into their career path, so to speak. You two do so effortlessly and purposefully. Why is that? And how do you do so with such an aura of respect?

Well, for us, the way we look at it is that at the end of the day, we’re human beings. We’re Black men and that’s first and foremost, you know what I’m saying? We experienced the same things that other people experience, so why shy from that? Especially because we do have a platform, why not talk about the experiences and give the voiceless a voice? In these times, especially for us, it’s just a no-brainer regardless of what the feedback may be or the kickback or how people may think about us – we really don’t care. The way that we approach artistry in our music is the same way. We don’t necessarily care about anyone’s opinion as we’re going to be who we are and that’s it. For us, it just naturally happened that way, just because we live in south Florida and it’s place where there’s just a lot of school shootings, there’s a lot of craziness. We experience it head on, so it’s just natural for us to really talk about it and bring it into our art. We don’t necessarily try to be, in some terms, an activist. It’s not always activism when we just want to be able to do the right thing and just speak about things that are real, honest, and are true to us. It just comes across that way, because everything that we talk about is true to us. It is real to us.

Right, it’s not just, “Oh, there is something happening. This is something we’re talking about. We’re going to put it out there this way artistically.” Instead, there is a driving force behind it that is even bigger and that is the fact that simply the lives that the two of you are living are effected. You’re going about making a movement through being wholly your own people with valid feelings.

You’re welcome. You know, Wil, this past fall, almost a year ago, you and Kev released Give Thanks. The 11-track holiday album was a mesmerizing staple for us throughout the season and really gave way to what Black Violin does: spark creativity, entertain, and remind people of joy. How did you decide that 2020, let alone the holiday season of 2020 amid a literal global pandemic, would be a good time to release that particular work?

Well, it was really time for it. COVID hit and we knew we had a lot of time to do something that we’ve been talking about working on for a long time: a Christmas album, a holiday album. Everyone’s really been begging us for it but we honestly just didn’t have the time. In 2020, we just figured, “Alright, let’s just do it.” We went in the studio, but we really wanted to approach our music differently. We wanted to make our holiday album more of a holiday spirit album, not necessarily a Christmas album. We wanted to make it something that you can literally play in June. We wanted it to be something fun, vibrant, and just had that spirited vibe to it, you know? That was the intention behind it. We then went in the studio and we had our producer, his name is Phil Boudreau, and just created this album with that in mind. I think it’s probably one of our best albums. It’s a lot of fun. It’s not your typical Christmas album – there’s definitely cuts on there that are traditional stuff, but there’s a lot of things on there that aren’t.

You’re a versatile band, so I get that – and it comes across flawlessly. Similarly, our last question for you is kind of just about this blending of genres that you have been doing essentially since the inception of Black Violin. The way your music and your sound and your influence epitomizes the idea of genre bending is beyond impressive and hard not to note. Modernly, though, and finally, artists of all kinds are sort of doing away with having to categorize their art or limit themselves. In this day and age, how does it feel to see the mainstream media not only accept the merging of genres, but look at what Black Violin does with fondness and acceptance?

It’s great to see the evolution of classical music being drawn into so much more. Crossing genres means as that genres itself has been kind of a box, which classical has always been in. It’s great to see the the diversity and the acceptance of change and the acceptance of blending and merging. Like you said, our albums are kind of all over the place at times. There are certain records that have a had of rock sound and a certain edge like that. Others have a smooth R&B vibe to it. Then, obviously, the classical meets hip hop sound as the basis. We try not to limit ourselves and music should be like that. For us, whatever feels good when we are creating in the moment, that’s what we go with.

FOR TICKETS AND INFO ABOUT BLACK VIOLIN’S PERFORMANCE AT KEAN STAGE ON SEPTEMBER 24, CLICK HERE!