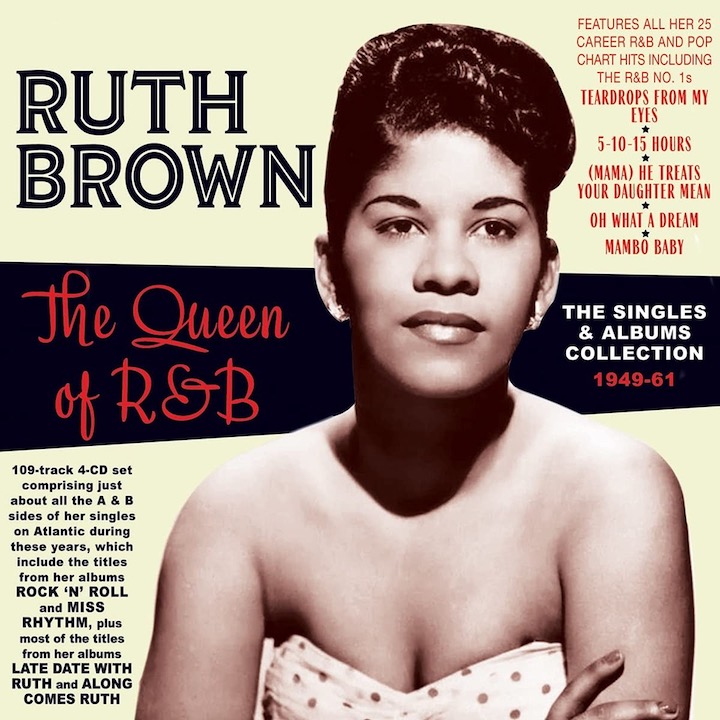 A Definitive Anthology from the ‘Queen of R&B’

It’s a safe bet that most listeners in 2021 don’t even know Ruth Brown’s name, but some 70 years ago she was hailed as the “Queen of R&B” and Atlantic Records was sometimes called “the house that Ruth built.” She scored about two dozen R&B hits, including five chart-toppers from 1949 to 1961. Some of them crossed over to the pop charts, helping to bridge the gap between that genre and R&B, and influencing Aretha Franklin and many other 1960s singers.

The Queen Of R&B: The Singles & Albums Collection 1949-61, a bargain-priced four-CD, 109-track anthology, delivers nearly five hours worth of Brown’s magic, including such hits as “5-10-15 Hours,” “Teardrops from My Eyes,” “(Mama) He Treats Your Daughter Mean,” “Mambo Baby,” and “Oh What a Dream.” The early R&B numbers are a treat, but Brown arguably shines brightest with some of the orchestrated pop ballads she recorded in the late fifties and early sixties, where she sounds a bit like Dinah Washington. Such selections as “Sea of Love,” “Why Don’t You Write Me,” “What I Wouldn’t Give,” and the Phil Spector-produced “Anyone but You” all feature gripping, must-hear vocal work.

It would have been fascinating to be in the room when 18-year-old Laura Nyro auditioned in the summer of 1966 for record producer Milt Okun and A&R man Artie Mogull, but listening to this CD is the next best thing. The late singer-songwriter’s talent appears fully formed on Go Find the Moon: The Audition Tape, the second release this year from her archives, following July’s Trees of the Ages: Laura Nyro Live in Japan. It’s a must for her fans, though its $17 price tag seems a bit high given its 19-minute playing time.

Accompanying herself on piano on the audition tape, Nyro delivers stripped-down but remarkably polished versions of her soon-to-be classic “And When I Die” and several other originals, including ones that never wound up in her catalog. After being prodded to show what she could do with covers, she also beautifully sings snippets from the jazz standard “When Sunny Gets Blue,” the Leiber-and-Stoller-penned Wilbert Harrison hit “Kansas City,” and Dusty Springfield’s “I Only Want to Be with You.”

Nyro abandons the covers after less than two minutes because she doesn’t know many of the words to any of them, but no matter: by the end of the audition preserved here, she has provided enough evidence of her large talent to make believers out of Okun, who went on to produce her first record, and Mogull, who signed on as her manager.

A Pop-flavored Gem from Dori Freeman

Dori Freeman’s music evidences an unusual combination of influences: raised in a family of bluegrass artists in southwest Virginia, she has an affinity for traditional Appalachian country music as well as for folk, yet she also clearly loves sixties pop-rock. As a result, her records would fit in alongside those of singers like Emmylou Harris, but they also conjure up performers such as the Everly Brothers and Skeeter Davis (who both also had strong country roots) as well as some of Phil Spector’s productions. In fact, a song by Spector and Gerry Goffin (the album-closing “Only You Know”) is one of only two non-originals on the new Ten Thousand Roses; the other is by Freeman’s husband, percussionist Nicholas Falk, who produced.

Falk represents a change – Teddy Thompson produced all three of Freeman’s prior CDs – and to these ears, it’s a good one. That’s not to say that her self-titled 2016 debut, 2017’s Letters Never Read, and 2019’s Every Single Star aren’t excellent or that she and Falk have made a U-turn on the new record. Freeman is still featuring country-associated instruments like mandolin and banjo while applying her gorgeous alto to songs that frequently focus on the ups and downs of love relationships or the empowerment of women. On addictively hooked originals like “The Storm,” “I Wanted To,” “Walk Away” (a duet with Logan Ledger that recalls the Everlys), and the title cut, however, she moves much further away from folk and country and ramps up the pop flavoring with lusher productions, stronger beats, and more upbeat melodies. It’s her best album to date, and that’s saying a lot.

Blue Crystal is only the second album from London-based Al Ross & the Planets, but it sounds like the work of a band that has been honing their music for a long time. That’s probably because it has: the group formed way back in 1983 and has been performing on and off ever since, but didn’t get around to releasing a debut album until 2017.

There’s not a weak moment on this exhilarating, lushly produced sophomore CD whose tuneful, anthemic tracks employ such instruments as piano, Hammond organ, and sax. In addition to a large core band that features lead vocalist/bassist Ross, the album taps a long list of guests, including veteran blues guitarist Norman Beaker as well as a trumpet player, a violinist, and on two tracks, a gospel choir.

You can hear the influence of the Beatles, especially Paul McCartney, and the group also sounds redolent of such other Beatles-impacted outfits as Badfinger and Oasis. That said, Al Ross & the Planets have an original sound and an exciting one.

James McMurtry, The Horses and the Hounds. James McMurtry has been making memorable records for decades. (If you’ve never heard such early gems as “Levelland,” on 1995’s Where’d You Hide the Body, you have some catching up to do.) Like the late Warren Zevon, whom he sometimes recalls, McMurtry combines authoritative vocal work, a rock sensibility, and literate, cliché-free lyrics. He is a consummate storyteller – not surprising, given that he’s the son of the late novelist Larry McMurtry – and he has some evocative tales to tell on this 10th studio CD, his first since 2015’s Complicated Game.

Bren Holmes, Everything You Never Wanted. After listening to this debut album by the Los Angeles–based Bren Holmes, you won’t be surprised to learn that he was born in Ireland and spent nearly 30 years playing bass with L.A.’s Young Dubliners. You can hear the influence of Celtic music on some of the tracks, and the instruments include uillean pipes, bodhran (a shallow Irish drum), and whistle. Still, this album, whose songs mostly address love lost and found, is rooted in rock and Americana. Holmes wrote all the music and lyrics with one exception: “S.O.S.,” a deft mandolin-spiced remake of the ABBA hit.

Chilllingsworth Surfingham, Chillingsworth Surfingham. You’re not likely to hear another new act like this one anytime soon. Chillingsworth Surfingham is a pseudonym for John Ashfield, leader of San Francisco indie-pop band the Bobbleheads. Here, he delivers 41 fast-paced minutes of frequently thrilling instrumental surf rock with titles like “8 Track Camaro,” “Cowboy a Go Go,” and “Surfer’s Ennui.” Ashfield provides the consummate guitar and bass while the Bobbleheads’ Rob Jacobs makes vital contributions on drums and other percussion. Imagine the Ventures and Dick Dale, updated for 2021, and you won’t be far off. Great stuff.