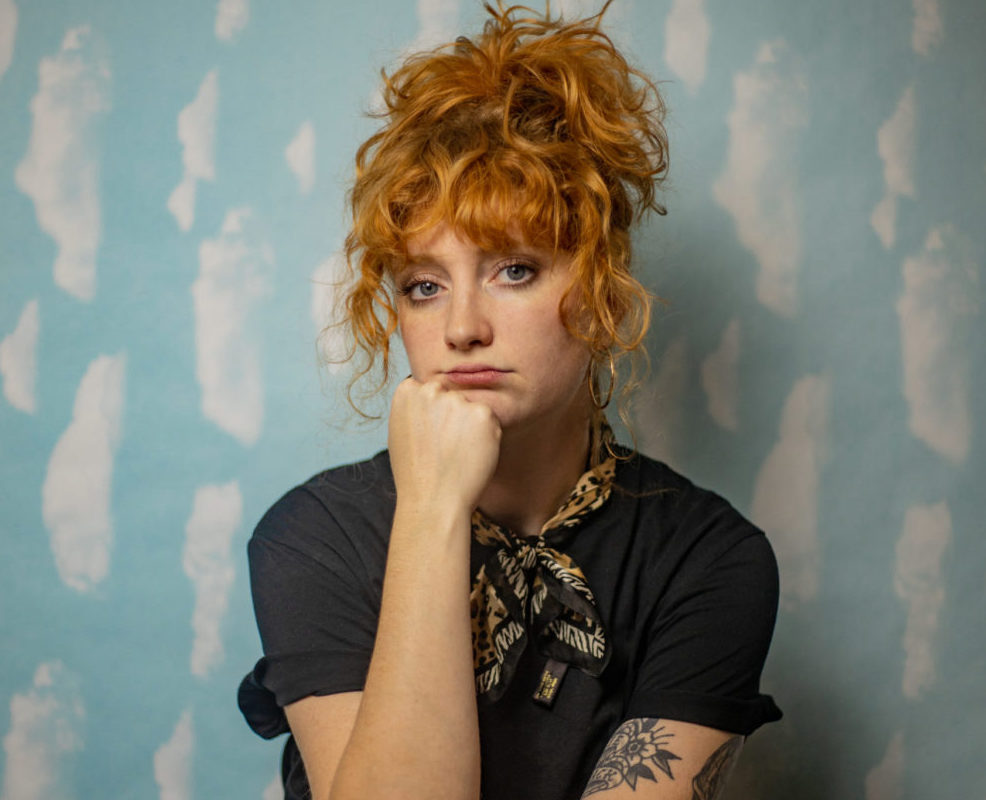 In a day and age so tense and so serious, a small dose of cleverly-worded, uptempo cynicism can’t hurt… right?

Frontwoman Avery Mandeville is a powerhouse of a performer, but even more of a powerhouse person. The way she tackles artistry, emotions, reality, and feminism are overwhelmingly pertinent and wonderfully needed. Alongside her band Little Hag, the rising star is able to tackle big goals in a way that is hypnotizing and entertaining.

When the possibility of touring became more of an obstacle than anyone expected, Little Hag turned its attention to something else – an album. By using quarantine to write new narratives, explore old demos, and become in tune with the various feelings that come with being a young person in a global pandemic, this band became edgier, wiser, and bolder. Mandeville walks us through that process, from inception to COVID to Leash to now, and we couldn’t be more grateful for her hard-hitting personality and welcomed transparency.

As a Jersey-based publication, it only feels right to ask about the Garden State’s impact on Little Hag. Whether it was the formation, the location, or the culture, how did New Jersey shape the Little Hag we know today?

Big props to all three of those. We’re all born and raised in a five mile radius from one other in Monmouth County. Avery Mandeville [songwriter, guitar, vocals] is from Lincroft, Matt Fernicola [guitar] and Noah Rauchwerk [keys] are from Holmdel, Chris Dubrow [bass] is from Oceanport, and Owen Flanagan [drums] is from Red Bank. We owe a lot to the open mic scene of this area in the early 2010s. Avery met Noah when they were 16 at Espresso Joe’s in Keyport (RIP), back when they both played ukulele covers of Bright Eyes and Death Cab songs (mortifying). Avery and Fern hosted an open mic for a few years at The Inkwell in Long Branch, and the band came together in 2016 amidst recording at Telegraph Hill Records in Holmdel (Thank you, Joe Pomarico!) and jamming at The Chubby Pickle open mic in Highlands. Shout out to the greatest mic host in the game, Cranston Dean. The man is a legend. Longwinded, but this all goes to say that we are Jersey as hell and millennial as hell… and it’s pork roll.

Speaking of where you’re at today. Your sophomore record Leash right around the corner, and as authentically Little Hag as it is, it’s also a bit different than its predecessor, Whatever Happened to Avery Jane?. In your opinion, what is the biggest difference between the two records?

Leash is more grown up, more sure of itself. There are still the fuck-you’s that are integral to Avery’s writing process (and eternally in her brain), but we recorded a lot of these songs after carefully demoing them in quarantine, which was new for us. It used to be that Avery would just bring a song to band practice and we jammed it until it felt good. In having to ditch “the old way,” I think we were able to make different (and better?) creative choices. If we ever held anything back before, we’re not anymore.

Your debut came right in time for the global pandemic, which I can’t figure out is a blessing or a curse. How did your emergence after signing with Bar/None Records and its timing effect you, if at all? Because regardless, in that time is when Leash was able to fully come to fruition.

We signed to Bar/None in February 2020, which was insane timing in hindsight, but the quarantine allowed us to sit with some songs and build them separately off one another for the first time. I (Avery) wrote a lot in March/April 2021 (unemployed, uncertain, drinking beer, and walking my dogs), which became the better half of Leash. I’d send Owen the demo, he would add drums and send it to Chris, who would add bass, etc. and in a couple days we had a song we built better apart than we might have together. I weirdly cherish that early quarantine freedom in a “watching the lower third news ticker on a snow day to see if school was closed” sort of way, which is all thanks to the grocery store and hospital employees who kept society running so I could sit around and have my little feelings. From all of us in Little Hag and the world at large, thank you.

We thank them immensely, and you! Why was now the right time to release a new LP, especially one that is s angsty and introspective? Why not let your debut get some face time, so to speak, now that things are sort of opening up again?

We decided to release Whatever Happened to Avery Jane? (a compilation of older tracks) last fall because touring was still such a pipe dream and Leash was hot on our heels as the record we wanted to get out there. Face time still feels like walking on eggshells for us. With so many people unable or unwilling to get vaccinated, being out and playing shows again feels like a short lived privilege that can vanish tomorrow. We hope more states adopt vaccine mandates for dining/events like New York so the burden doesn’t fall on venues and bands to protect themselves and fans from COVID-19.

You know, a big part of what is making Little Hag so memorable with such wonderfully balanced pop tones, we believe, is the band’s line up. Listening to your music, I find it to be cohesive in feeling, lyricism, and musicianship. What is the bands process of playing off one another and building a song – or a record – from the ground up?

The most recently written half of Leash came about in that quarantine demo style that we’re now so fond of, but our usual/former process was figuring out a lot of things in the studio and messing around that way. Little Hag has been the five of us for many years, but co-writing, collaborating, and meticulous production is obviously crucial to the end result. “Get Real!” was co-written and produced by Joshua Perna of Saint Slumber, Piss was co-written and produced by Dana Yurcisin, which gives them an edge from these gear head princes of pop. Erik Kase Romero produced Leash and his sensibilities shine through in subtle ways, adding a little sprinkle of synths and sounds here and there that elevate the whole record. Fern, Chris, Owen, and Noah are perfect baby boys who make Avery’s life really easy by being great at their instruments and even better at interpreting her notes (that are rooted more in emotion than in logic or music theory.)

A single off of this upcoming record is “Get Real!” It’s edgy, yet warm at the same time. It’s also vulnerable and cynical. How did this track, specifically, get chosen to advance the record as a whole?

To be honest, “Get Real!” came out up front because it’s one of the oldest of the bunch, recorded with the aforementioned Joshua Perna in 2016, and I wanted to lead with it and get it out of the way as an introduction to the newer material. It’s as brazen as some other Little Hag songs, but definitely more fun and dancey than most of what I write, so it gives the world our best foot forward (before sucking it into the quicksand of our darker tracks). Josh has been one of my partners in crime for almost a decade and I’m so grateful for his friendship and artistry.

Little Hag is working diligently to get their voices heard and I cannot commend you enough for doing so, because your sound and style and story is the perfect blend of feminism and beautiful and exuberance and anger. Where do you draw the line in terms of the message a story has or a basis for a song? Because so far Little Hag has been limitless, seemingly, and stunningly unabashed.

I feel so seen by that description! For us, nothing is off the table, but everything has to be authentic. Our songs are extremely literal and based on real events, memories, and conversations. I have a hard time writing fictitiously because the truth is so much stranger (as they say), but it’s a skill I’m working on. As long as weird shit keeps happening, the songwriting material will keep coming naturally.

What is next after Leash? If possible to say, because the lightning speed of this gritty group is mesmerizing to say the least.

Mostly, we’re gigging in the tri-state and trying to stay safe and sane. We’re playing a wedding in LA in February 2022 (Shout out to Rose and Mat!) and are trying to book some dates on the drive there and back (If you’re reading this, help me!). One day we’ll quit our day jobs, but for now we have our friendship and our big little dreams.

In the meantime, we hope everyone continues to get vaxxed and mask up. It’s so easy and everyone will think that you’re really cool. You can even wear masks while performing to protect your bandmates, crew, and the audience. Feel free to try it yourself and see what I mean!

LITTLE HAG’S LEASH IS OUT ON ALL STREAMING PLATFORMS ON SEPTEMBER 24! PRE-ORDER HERE!