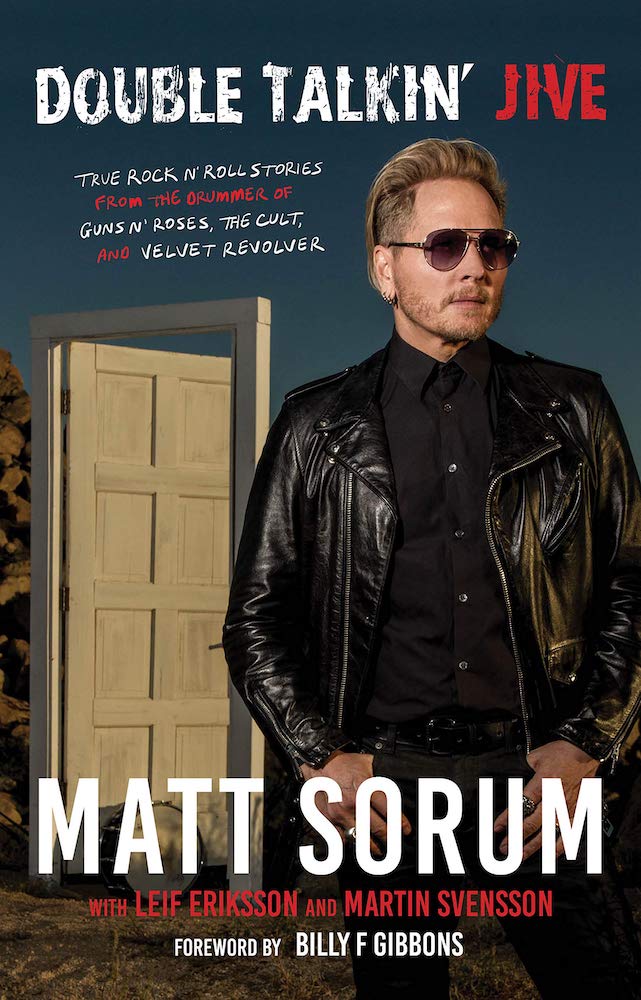 “Stop Smiling So Much!” – Diving Into Matt Sorum’s Autobiography

Chances are you have seen Matt Sorum a lot for the past few decades providing the backbeat to some of the greatest rock bands including Guns N’ Roses, Velvet Revolver, and The Cult. In Double Talkin’ Jive, he takes the reader on a wild ride filled with all of the debauchery and decadence you can throw a drumstick at.

However, the heart of the book is based on his relationships, struggles to find sobriety, and ultimately finding happiness. It’s part roller coaster/part cautionary tale with no nonsense honesty.

Double Talkin’ Jive introduces you to the narrator involving a celebrity wedding reception, his naked girlfriend, and a night in the slammer. I had so many questions after reading this. He does get around to answering them. First, he throws us into a time machine back to his childhood growing up in Long Beach, California during the sixties.

Sorum details the first time he knew he wanted to be a drummer. Just like many others, it was the fateful evening The Beatles appeared on the Ed Sullivan Show. “I saw Ringo, and he was sort of like this cartoon character,” he recalls. “Some kids want to be a fireman or a train conductor. But for me, something clicked.”

Shortly after this, his parents divorced. This created a lot of complexity for the young Sorum and it became even more tumultuous after a new person entered the mix.

The drums kept him going. In fifth grade, he formed Liquid Earth – a group of kids wearing Hawaiian shirts playing Crosby, Stills, Nash & Young covers. He joined his first serious band called Prophecy at the age of 15. Eventually, he connected with Gregg Wright and Tim Solas after a jam night at The Central Club and embarked on his first tour. This experience allowed him to garner serious chops.

Upon his return, Sorum discovered Tori Amos after hearing her play at a piano bar close to the venue where he was gigging and they formed Y Can’t Tori Read. He was burned by the record label when they wanted to sign her as a solo artist. Shortly after this, he landed an audition with The Cult. Ian Astbury told him, “You’ve got the gig, but stop smiling so much.”

The rest is rock ‘n roll history so to speak – from his soaring success in Guns ‘N Roses and Velvet Revolver to the fun side projects Kings of Chaos and Neurotic Outsiders. He will regale you with moments too surreal to be true such as Axl Rose and his mom hanging out, meeting Elizabeth Taylor at the Freddie Mercury tribute concert, his encounter with Phil Spector and Kato Kaelin, and much more.

This book belongs in your collection if you love all of the trappings of rock and roll and the candid and intimate story of a man who is not just a rockstar, but a human being who has seen his share and then some.

Sorum’s autobiography, Double Talkin’ Jive: True Rock ‘n’ Roll Stories from the Drummer of Guns N’ Roses, The Cult, and Velvet Revolver is available via Rare Bird Books and will be available everywhere in March 2022.