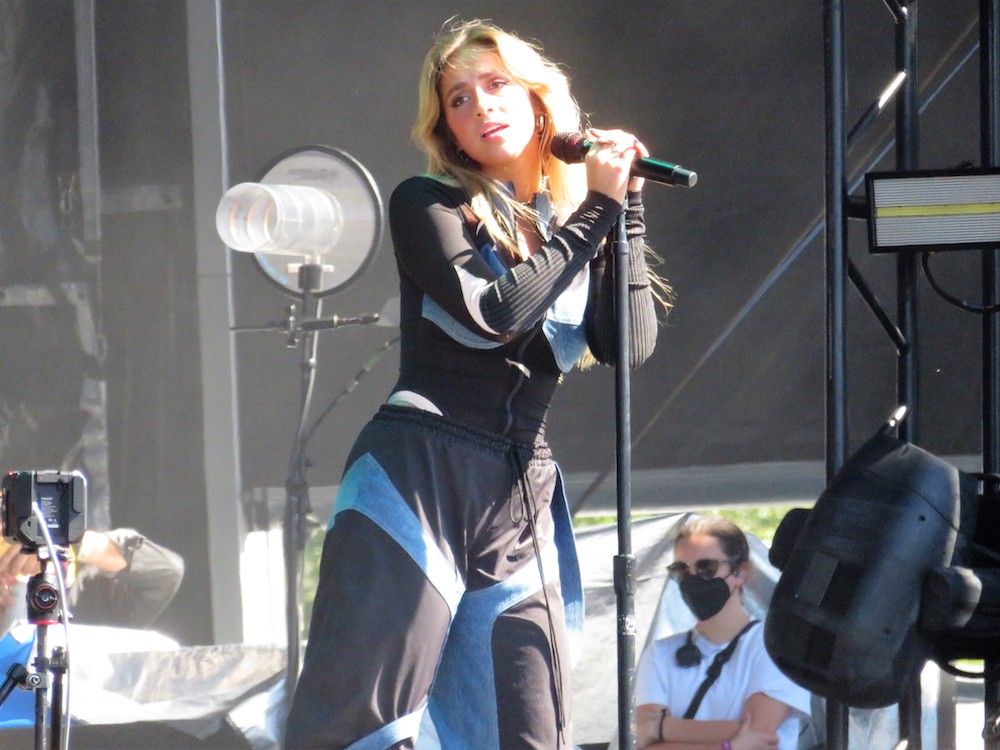 New York Governor Kathy Hochul briefly welcomed attendees from one of  the stages on Saturday afternoon. A few other community leaders spoke on the various days, however, speeches were kept to a minimum.

This year, Governors Ball celebrated its 10th anniversary in New York City, and for this summer the music festival moved to the site of the former Shea Stadium – now a parking lot outside Citi Field. In 2011, Governors Ball started on Governors Island and headlined Girl Talk, Pretty Lights, and Empire of the Sun. The festival was held on Randall’s Island from 2012 to 2019. The festival was cancelled in 2020 due to the coronavirus lockdown.

Fans were required to present proof of COVID-19 vaccination or a negative COVID-19 test within 72 hours for entry on each day. Three-day general admission tickets sold for $319 plus fees. One-day passes were $129 plus fees.

Diversity Was Key to Governors Ball 2021

Governors Ball over the years has booked diverse acts, but this year was a step further. While Governors Ball always features numerous African-American and women artists, this year also saw an increase in the number of LGBT+ performers. This year, the bill also opened a new path by booking an African, afro beat singer Burna Boy.

A$AP Rocky was the one African-American headliner at Governors Ball 2021. Megan Thee Stallion and 21 Savage were not billed as headliners, but the audience response to their appearance will guarantee that status in future festivals. With AfroPunk Brooklyn missing for the second straight summer, the festival became the city’s primary showcase for emerging alternative and experimental African-American artists, including Smino, 24kgoldn, Odie, BJ-the Chicago Kid, Pink Sweats, Cordae, RMR, Breland, and Bartees Strange.

J. Balvin became the first Latinx artist to co-headline a night at Governors Ball and spoke to his multi-lingual audience in both English and Spanish. Lebanese-American Riz la Vie, Filipino-American Yeek, and half-Japanese/half African-American Umi also might have opened ethnicities not previously featured on Governors Ball stages. Kehlani, who has performed at several festivals in past years, has described her ethnicity as a mix of “Black, white, Native American, Filipino, and Mexican.”

Phoebe Bridgers, Kehlani, Orville Peck, Princess Nokia, Muna, King Princess, Teamarr, and Umi were among the LGBTQ+ artists to perform at Governors Ball this year. In early August the organizers of Governors Ball 2021 removed DaBaby from the bill following what appeared to be homophobic comments by the rapper during his set at Rolling Loud Miami in July.

“Founders Entertainment does not and will not tolerate hate or discrimination of any kind,” the festival posted upon announcing the cancellation of DaBaby. “We welcome and celebrate the diverse communities that make New York City the greatest city in the world. Thank you to the fans who continue to speak up for what is right. Along with you, we will continue to use our platform for good.”

Post Malone closed Governors Ball 2021 with an hour-long set that included duets with Young Thug, Roddy Ricch, and 21 Savage. Rumors circulated that A$AP Rocky’s girlfriend, Rihanna, was at the festival, but that rumor so far is unsubstantiated. A few rappers called for mosh pits, and many performers dropped frequent f-bombs, but overall the vibes were chill all weekend and all the artists put on some their best performances.

Two or three stages were rocking simultaneously, so attendees had to choose which act to see according to a published schedule. Almost all of the performances started on time, but a few started considerably late. A$AP Rocky, Megan Thee Stallion, and Young Thug kept their audiences waiting 20 to 30 minutes. The biggest offender was 21 Savage, who came on stage an hour late and performed only about half an hour. (Attendees could have caught Carly Rae Jepsen’s entire set rather than standing and waiting for 21 Savage to come on.)

All weekend, nearly every artist effused about performing to a live audience again. Attendees enjoyed good sound, the lighting was usually bright, and sightlines were clear for the most part. The audience found many sing-along moments as the artists performed. For reasons perhaps known to few, the audiences occasionally sang Miley Cyrus’ “Paty in the U.S.A.” while awaiting for their artists to appear.

Participants had many food options, astroturf for relaxing, medical assistance, and 12-step meetings. Several corporations sponsored free “experiences,” including hair styling, temporary tattoos, gifts, selfie backgrounds, and lounges with phone-charging stations. Attendees who bought VIP tickets did not necessarily get a better view, but did have air-conditioned bathrooms rather than the portable toilets used by the general admission ticket holders.

Governors Ball 2022 may return to its traditional first weekend in June, but whether it will return to Randall’s Island or Citi Field is still in question. Meanwhile, the three-day hip hop-dominated Rolling Loud will repeat the magic of Governors Ball 2021 in the Citi Field parking lot in late October.