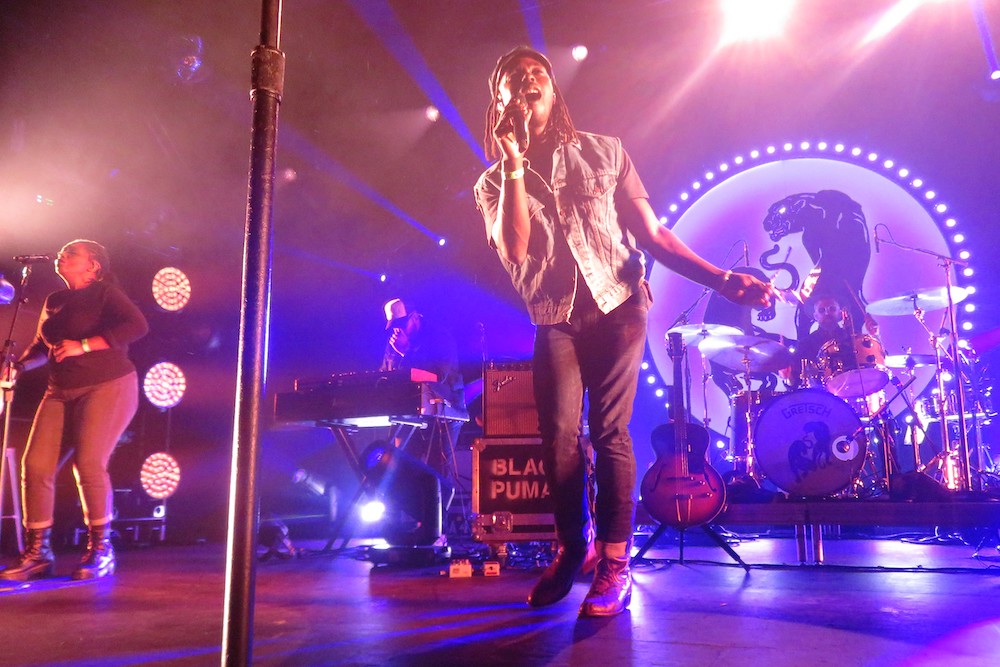 A young woman with a cane sat in a folding chair in the disabled section at Brooklyn Steel while the support act, Pachyman, performed his instrumental reggae and dub music. When Black Pumas came on, she stood, leaning on her cane for balance, and danced in place increasingly more fervently as the show progressed. By the encore, she had worked her way to the front of the room by the stage, dancing and waving her cane in the air.

Black Pumas seemed to have a similar effect on a majority of the audience in the 1,800-capacity room on the fourth of four consecutive nights. The sold-out audience stood in tight quarters, but from the mezzanine, much of the crowd below could be seen swaying gently to the rhythms. Led by vocalist Eric Burton and guitarist Adrian Quesada, the seven-member band laid down smooth and breezy grooves that had their listeners’ hips swinging and heads bopping.

Black Pumas formed in 2018 when Burton, a former busker at the Santa Monica Pier in California, relocated to Quesada’s home base of Austin, Texas. Quesada, a member of the Grammy-winning Latin music band Grupo Fantasma, was assembling musicians to explore classic soul and funk music. Introduced by a mutual acquaintance, Burton and Quesada bonded. They recruited additional musicians, performed locally, and gained national attention after the release of Black Pumas’ debut album in 2019. The band continued garnering numerous awards and honors, including an invitation in January 2021 by then President-Elect Joe Biden to perform virtually in his Celebrating America primetime special during the presidential inauguration events.

Black Pumas is still a relatively young band, but the performance at Brooklyn Steel demonstrated advanced professionalism. Maybe it was all those years of busking, but Burton was a thoroughly magnetic personality, working the audience into song, applause, and body movements. While he commanded the spotlight, the band provided the silky grooves and gliding hooks. Transitions from retro-soul to mainstream rock worked like sparkling embers bursting into scorching flames. Burton alternated between satiny steps and head bangs, and the audience intensified its engagement accordingly.

The highlights of the performance were the best-known songs by Black Pumas. A cover of Bobby “Blue” Bland’s “Ain’t No Love in the Heart of the City” from 1960 started with Burton teaching the audience the chorus. Burton then extended the song so that he could sing it from the audience, weaving his way to the back of the room and even to the balcony. The band closed its set with “Colors,” the song that reached number one on AAA radio and reportedly has been streamed more than 100 million times. For an encore, Burton appeared alone on the balcony with his acoustic guitar, the band moments later coming on stage and joining him in the music. The musicians might not have noticed, but that was when the captivating swagger of Black Pumas’ sweet soul music motivated a disabled dancing lady near the stage to dance and wave her cane in the air.