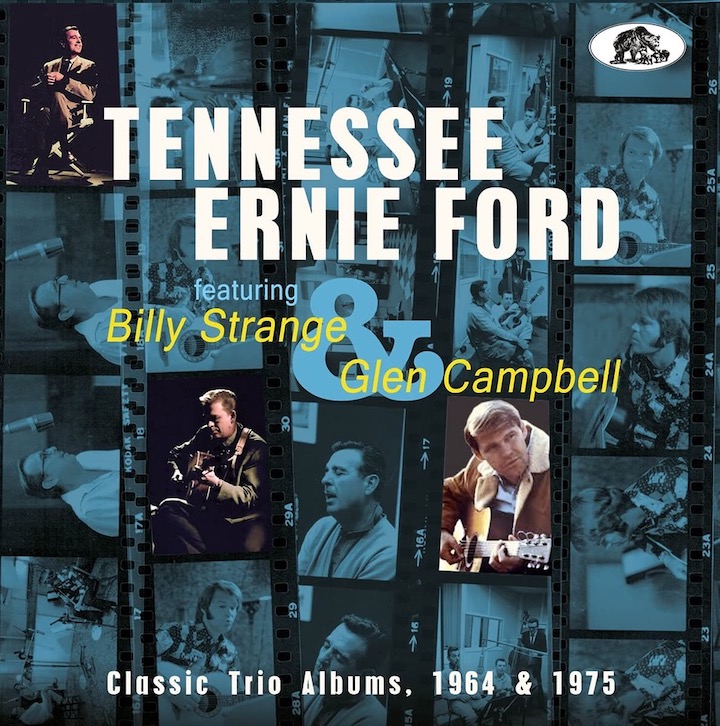 Many people probably remember Tennessee Ernie Ford only for his biggest crossover hit, “Sixteen Tons,” which topped the pop charts in 1955 and found the country-based singer lamenting a coal miner’s plight: “You load 16 tons, what do you get? / Another day older and deeper in debt.” But that Merle Travis cover represents just a tiny slice of Ford’s career, which embraced more than 100 country, boogie-woogie, pop, and gospel albums and nearly two dozen hit country singles.

The instrumentation is excellent throughout the 22-track release, and Ford’s rich, distinctive bass and baritone vocals rank with the most evocative of his long career. Another plus is the classic material, which issues from such best-in-the-business country songwriters as Don Gibson (“Sweet Dreams,” “(I’d Be a) Legend in My Time”), Hank Williams (“There’ll Be No Teardrops Tonight,” “May You Never Be Alone”), Kris Kristofferson (“Nobody Wins,” “Loving Her Was Easier,” “For the Good Times”), Willie Nelson (“Funny How Time Slips Away”), Floyd Tillman (“I Gotta Have My Baby Back”), and Ernest Tubb (“Take Me Back and Try Me One More Time”).

British guitarist Brinsley Schwarz has served time in several notable rock bands since the early 1970s, including Graham Parker’s Rumour and Ducks Deluxe, as well as the outfit that bore his own name, which also included Nick Lowe. In recent years, however, Schwarz has been stepping out on his own.

In fact, his second solo album, Tangled, is nearly a one-man show, with Schwarz writing all the songs aside from Parker’s “Love Gets You Twisted,” providing virtually all the guitar, bass, and vocals; and even drumming on one track. Veteran British musician James Hallawell, who like Schwarz has contributed to Parker’s albums, is the only other ubiquitous contributor; he ably handles all keyboards and co-produced the album with Schwarz.

The record, which delivers a good time from start to finish, has more in common with the music of Paul McCartney and Badfinger and the playful pub rock of Ducks Deluxe than with the anger-and sarcasm-fueled early new-wave recordings of artists like Parker. Just compare Parker’s original version of the aforementioned “Love Gets You Twisted,” where he sounds positively irate, with Schwarz’s wistful, melodic cover.

Jeremy Ferrara, Everything I Hold. As the saying goes, sometimes less is more. Case in point: Everything I Hold, the latest album from California native Jeremy Ferrara. The record features nothing but his finger-picked guitar and delicate voice, but that should be more than enough to grab the attention of anyone who takes the time to listen. On numbers like “Morning Light,” “Clear My Mind,” and “Clueless Now,” Ferrara recalls 1960s singer/songwriter Bert Sommer while exuding as much gentleness and vulnerability as anything in Nick Drake’s catalog.

The 32-minute, eight-song set, which the singer and his producer recorded in just two days in his current hometown of Portland, Oregon, is available only digitally – unless you count the cassette edition (no kidding).

Tony Kamel, Back Down Home. Tony Kamel is the lead singer and guitarist and a principal songwriter for Austin, Texas’s consistently impressive Wood & Wire, whose third studio album, North of Despair, earned a 2020 Grammy nomination. Fans of that CD seem likely to appreciate this solo debut, which like Wood & Wire’s records, is rooted in acoustic country-folk.

Kamel composed all the songs (in a few cases with co-writers), which mix in elements of jazz and Cajun music and feature horns, piano, mandolin, fiddle, keyboards, and lap steel in addition to the singer’s own acoustic guitar work. Country singer/songwriter Bruce Robison produced the analog recording, which lives up to its title with performances that sound as if they could be issuing from Kamel’s front porch.

Noel McKay, Blue, Blue, Blue. It turns out that crafting and performing memorable songs wasn’t the only significant thing the late Guy Clark did for the music world: he also discovered Texas singer/songwriter Noel McKay, whose latest album comes loaded with deft, humor-tinged lyrics, spare instrumentation, and country/folk melodies that make clear why Clark apparently considered him a kindred spirit.

McKay addresses some well-covered territory – including failed relationships, homesickness, and homelessness – in songs like “The 50 Loneliest Places in the Nation,” “Sleeping in My Car,” and “Flying and Falling” (the latter co-written by Clark). But he puts a fresh spin on every subject he touches in these songs, many of which reportedly incorporate autobiographical elements.

Nathan Bell, Red, White and American Blues (It Couldn’t Happen Here). Every number packs a punch on this blues-rock entry from guitarist and songwriter Nathan Bell, which incorporates swamp, Americana, jazz, and folk elements and sounds as if it were recorded live in the studio. The well-crafted songs on the aptly titled record, which the gravelly voiced Bell wrote over the past decade, are mostly first-person vignettes about the dark side of the American dream.

In the opening track, for example, the protagonist proclaims that he made a deal with the devil that he’d “leave Angola Prison lyin’ on my back,” while “American Blues” addresses gun violence, racism, and the Vietnam War and “Wrong Man for the Job” includes at least one verse that seems aimed at Donald Trump. There’s sweetness here, too, however, particularly on two of the three songs that feature vocal duets with guest Patty Griffin: “A Lucky Man,” which Bell dedicates to his father, and the acoustic “To Each of Us (A Shadow),” a poetic and passionate love song.