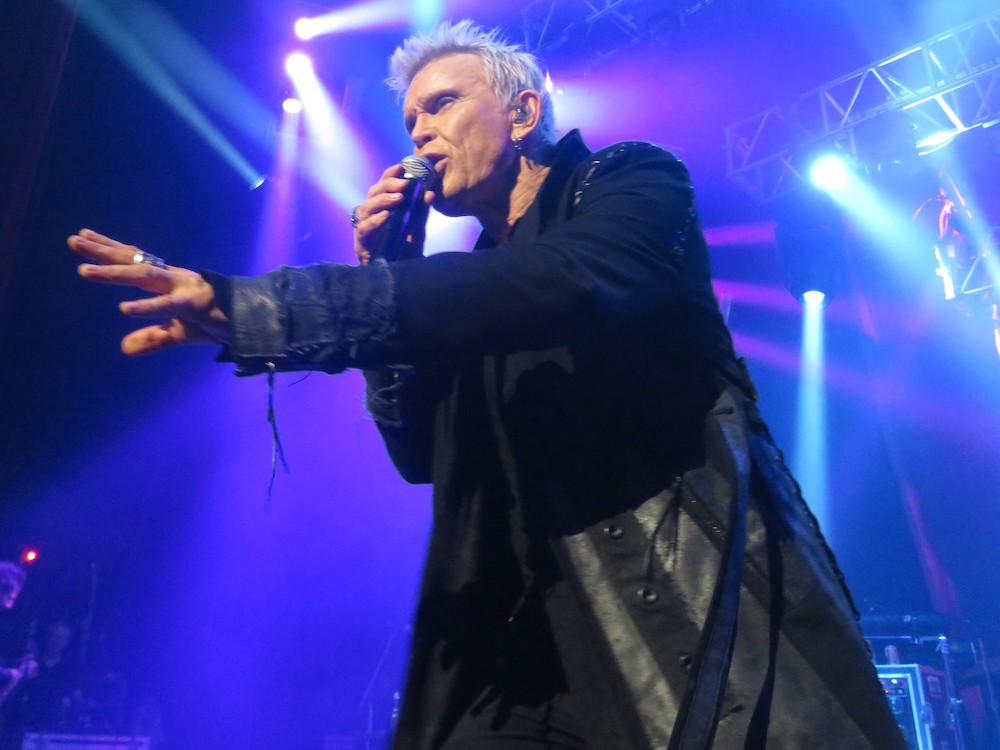 Let’s face it, many of today’s best rock performers are senior citizens. Billy Idol, for instance is 65-years-old and a grandfather. Yet, at the Capitol Theatre, the blond spiky-haired, abs-packing, biker-jacketed rocker took the stage like the Billy Idol of 1980s MTV fame. That is to say that Billy Idol was a human tornado.

Accompanied by a band that has worked with him since 2014 (guitarists Steve Stevens and Billy Morrison, keyboardist Paul Trudeau, bassist Stephen McGrath, and drummer Erik Eldenius), Idol bounced on stage as the musicians cranked “Cradle of Love.” As he raced quickly all over the stage and engaged audience enthusiasm by stepping to the edge of the stage, he crooned in his deep, rich vocals. The vocals were turned high so that they were crisp and clear above the blasting rock grooves played by the band.

Idol’s voice was strong, husky, and supremely masculine. Singing nightly on tour strains the vocal range, however. Idol cleverly and conveniently built many of his songs to a crescendo and then often held the microphone to the audience in order to encourage his fans to sing the most taxing shouts.

Idol’s peak commercial success was in the 1980s and he drew most of his set from that era. Also reaching for both the old and the new, he performed “100 Punks,” a deep cut from his former band, Generation X, as well as “Bitter Taste” and “Rita Hayworth,” two songs from The Roadside four-song EP released on September 17, his first new music since 2014. The familiar hits bookended the lesser-known songs.

For much of the performance, Idol’s longtime guitar slinger Steve Stevens held his own spotlight. He played searing leads throughout the set, and had his own extended solo midway through the show. Towards the end of the set, Stevens performed “Top Gun Anthem,” a Grammy Award-winning instrumental which was featured in the beginning and end of the 1986 film Top Gun.

While the flame-bursting song selection and the stunning guitar playing drove the sonic mission, Idol himself was the eye magnet. Changing wardrobe several times, sometimes even while on stage, he was colorful and radiant on stage. The bright spotlight remained on him with good reason, as he swaggered, sneered and danced to the rhythms. His very presence commanded attention at all times. In a time when many musicians remain static on stage and compensate by adding lighting for flash and spectacle, Idol was old-fashioned. He put on a show that excelled in sight and sound. Yep, a human tornado on stage.