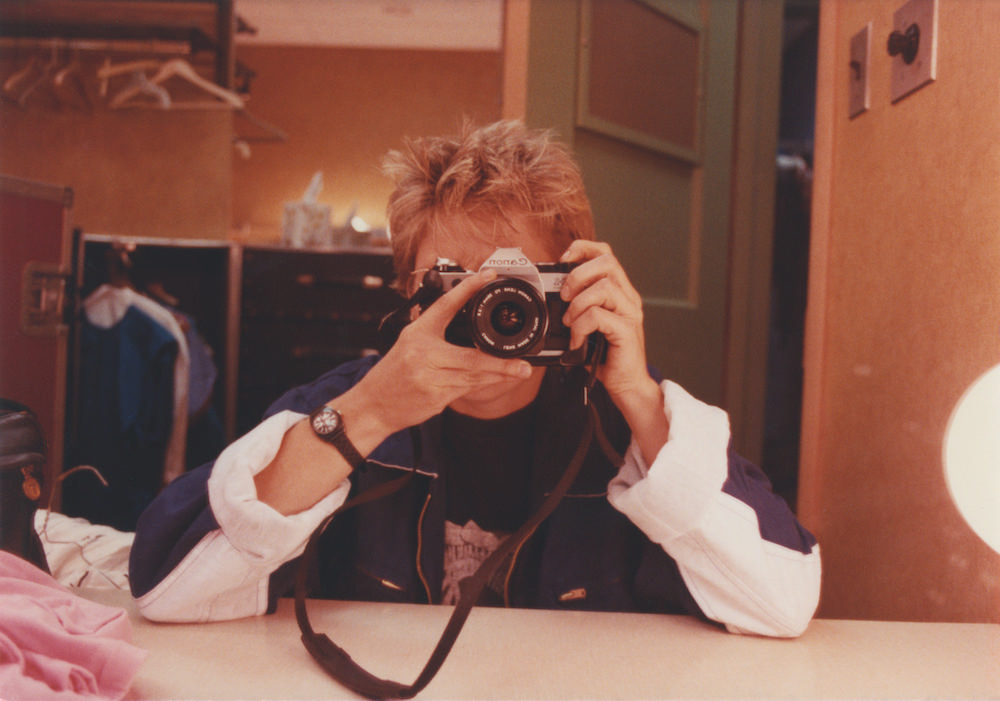 It’s not everyday that you’re brushing shoulders with Joan Jett and going on tour with The Police, but for the fun-loving and soon-to-be Rock and Roll Hall of Fame inducted Go-Go’s drummer, it was a lifestyle… one that was diligently documented thanks to having a camera (Yes, camera – not smartphone!) always in-hand.

“I think it’s cool that people get to have a look inside a band from the perspective of a band member, because that doesn’t happen a lot,” says drummer Gina Schock, talking about her book, Made in Hollywood: All Access with the Go-Go’s (published on October 26 by Black Dog & Leventhal), which tells her remarkable life story.

Shock’s own photos dominate the book, making this a much more visual history than the typical memoir. She also tells the tales corresponding to those shots, as well as including essays by her Go-Go’s bandmates and various celebrity friends such as Jodie Foster, Dave Stewart of Eurythmics, and Pee-Wee Herman (Paul Reubens).

Altogether, it’s a mostly exuberant look back on Schock’s entire life, from growing up in Maryland through her triumphant present as a Rock & Roll Hall of Fame inductee this year. She doesn’t shy away from discussing the more difficult times that came in between, though, like when she had heart surgery while only in her twenties, drug addiction issues, and the Go-Go’s acrimonious 1985 breakup.

“I had been thinking and talking about doing a book for decades,” Schock says, calling from her San Francisco home, “but it was such an overwhelming thought that I could barely broach it. I was like, ‘I don’t know if I can handle it.’” Finally, a year and a half ago, “I pulled all of my stuff out of everywhere. I had it stored all over the place. Dumped it all on the living room floor.”

There was a lot to go through. Simultaneous to her rise to fame as the Go-Go’s drummer, Schock had also become an avid amateur photographer, taking shots of her bandmates at every opportunity as they went from obscurity to worldwide fame. She was, unwittingly, becoming the band’s archivist. “I just happened to be into photography,” she says of that time. “I walked around with that camera around my neck. I loved it. It was so much fun with the girls. Anything I said to do, they would do!”

The photos in Made in Hollywood make that clear: there are many shots of the Go-Go’s goofing around, their zany sense of humor as showing they’re personally as upbeat as the rock music they play in their hits “We Got the Beat,” “Vacation,” and “Our Lips Are Sealed.” Far from fretting about having these candid photos being published, Schock says her bandmates actually encouraged her to do so. “I’ve pulled out these photos so many times and we’d all get hysterical,” she says. “That’s part of the reason why the girls wanted me to get a book deal and put this out.”

Schock says it was easy to write the stories that correspond to the photos, and it helped that since 1978, she’s kept daily planners, tour diaries, and other documentation that made it possible for her to piece together exactly what happened when. “This whole thing made me smile and made me grateful,” she says of this process. “I relived a lot of my history with the band, and it felt good.”

While most of Made in Hollywood bubbles over with optimism and joy – much like Schock herself does in conversation – her stories also make it clear that she’s had to demonstrate a lot of grit and tenacity in order to get where she is now. This, she says, comes from her parents – “the best parents in the world,” she says. “They taught me that hard work means something. I have a kick-ass work ethic. I like working. I like staying busy all the time. Sitting around is like death to me.”

When Schock first arrived in L.A. in the late ‘70s and joined the Go-Go’s, her hardworking approach became a crucial ingredient in making the band become successful. “I felt like they were going to bring the fun into this for me, and I was going to bring the work ethic that they needed,” she says, recalling telling them, “’We need to rehearse every day’ – because they were used to just rehearsing every once in a while and were kind of just doing this for fun and to hang out with their buddies who were all in bands.”

Fortunately, Schock’s bandmates listened to her advice. “I think that when I played with them, it shook the cobwebs out of their heads: ‘Oh wow, she can play pretty damn good – maybe we should follow her lead,’” she says. “That’s the only thing I can figure because they made it fit into their schedule and they got really serious very quickly – but still kept that element of fun, which was something I was desperately needing.”

This formula proved highly successful for the Go-Go’s: their 1981 debut album, Beauty and the Beat, reached the top of the charts – a first for an all-girl band who wrote their own songs and played their own instruments. Though they’ve disbanded and reunited on more than one occasion ever since, they’re currently back together and actively touring, and Schock says they couldn’t be happier to play all the hits that fans have loved for the past forty years.

“The whole time you’re onstage you’re drawing energy from the audience, and they’re drawing energy from you,” Schock says. “It’s like this back-and-forth thing. So when the audience is really grooving on what you’re doing, you can’t help but respond, even if it is the ten thousandth time I’ve played ‘We’ve Got the Beat.’ I’m seeing everybody have a great time, and that really puts fire inside of me and makes me want to give the most that I can. And I know everybody in the band feels that way.”

“We’re doing six or seven shows at the end of the year,” Schock continues, “and then next year, we already have a tour booked with Billy Idol in the U.K. during June and July, I think. We’re playing Wembley Arena and Leeds Arena, all these huge stadiums. And we’re starting to book shows in the States.”

Before all those shows, though, the Go-Go’s will do a very special performance at the induction ceremony for the Rock & Roll Hall of Fame on October 30. “It’s about time, but it still kind of knocks me out! It’s like, wow!” Schock says of this honor.

That is just the latest achievement in a long and illustrious career, and Schock is pleased as she looks back on it all. “I have no regrets,” she says, noting that putting together Made in Hollywood helped her appreciate her success even more: “It made me so grateful. Like, ‘Wow, what an incredible journey we’ve been on, and we’re still doing this!’ That’s incredible.”

GINA SCHOCK’S MADE IN HOLLYWOOD: ALL ACCESS WITH THE GO-GO’S IS OUT 10/26! YOU CAN PRE-ORDER IT HERE! FOR INFORMATION ON THE IN-PERSON AND VIRTUAL EVENTS SCHOCK HAS COMING UP FOR THE BOOK, CLICK HERE… THERE IS A DATE RIGHT IN OUR BACKYARD AT BOOKENDS IN RIDGEWOOD, NJ ON 11/18!