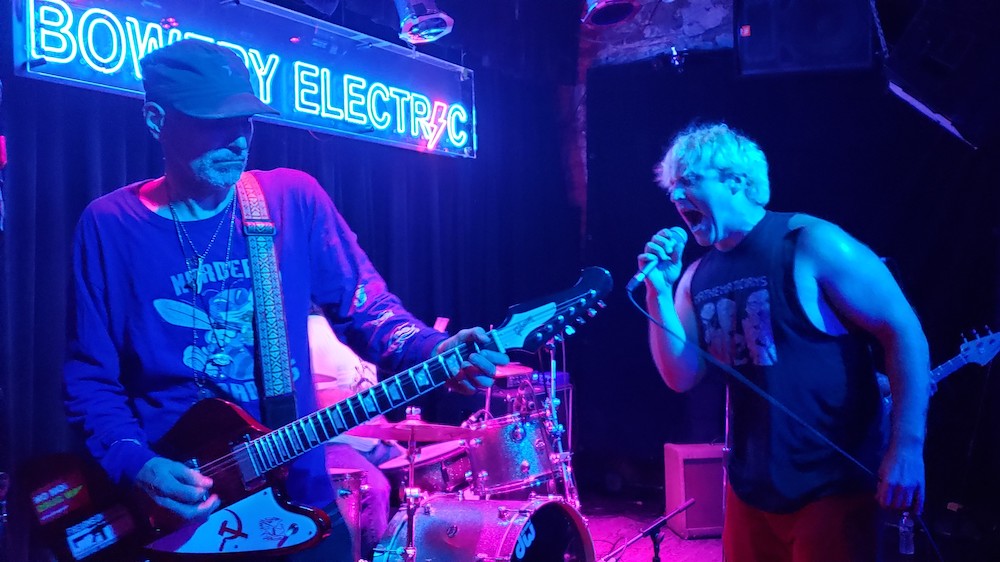 New York’s hardcore scene was born and developed in the 1980s. A community of angry youth picked up musical instruments and put their rage into raw, fast rock music. Reagan Youth was among the earliest of the hardcore bands, building a following, performing regularly at the Sunday matinees at CBGBs, and touring the regional punk circuit. The band members expounded on anarchistic themes and often used sarcasm and symbols from hate groups to parallel the Young Republican movement of President Ronald Reagan with the Hitler Youth of World War II.

“Charlie Tripper was Reagan Youth’s very first drummer,” Bakija told The Manhattan Beat after the concert. “He was the guy from another junior high school who we met at high school. He played drums and had a black leather jacket and so he was in. Charlie wasn’t just there from the beginning but played with us for years while we were in high school. We were not called Reagan Youth yet.

“Tibbie X has been with me the past eight years or so. She’s steady, great, brings that feminine touch, but can still thrash on bass. She is very important to this band’s make up.

“Our singer Neil has just joined us on our second go around. Neil only got better as a singer, but as a friend and most importantly, as a human being. And Neil works hard.”

The current line-up of Reagan Youth includes musicians who probably were not yet born when New York’s hardcore scene was emerging out of CBGBs and 7A. Nevertheless, younger musicians have plenty to be angry about, and so the present band has recaptured and even polished much of the original band’s sound and fury. With no new recordings to promote, Reagan Youth’s performance at the Bowery Electric revived the catalog from decades ago. The musicians resuscitated the old spirit, with the rhythm section banging away while Bakija wailed on his guitar. Hardcore musicians are seldom noted for their skill on their instruments, but Bakjia performed impressive leads with his guitar, lifting the songs beyond their power chords and speedy riffs.

Between songs, Bakija babbled about whatever caught his attention, including some vague political ramblings. Now older and calmer, he was mostly chatting, though, not rallying the audience into political action. Even the satirical political lyrics seemed mostly for fun.

If fun was the goal, Reagan Youth succeeded. Even in that tiny room, the audience engaged in its share of moshing and body slamming. Audience members frequently reached for the microphone to chant choruses with the band. The rest of us just enjoyed the scorching music.