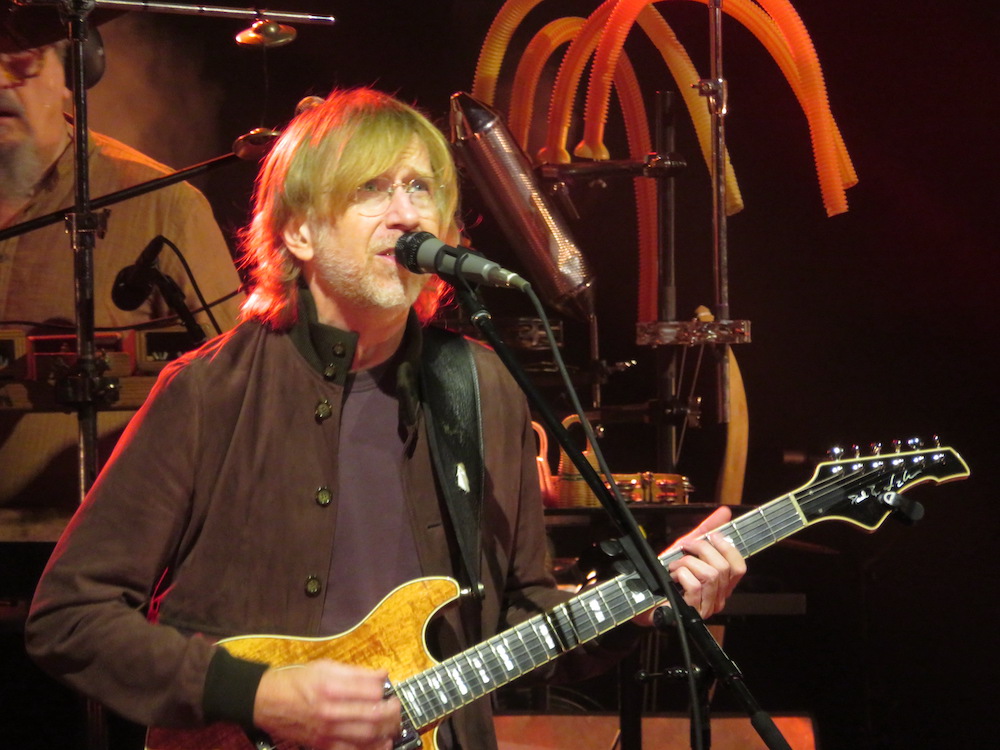 COVID-19 has complicated the Trey Anastasio Band’s Fall 2021 concert tour far more than could have been anticipated. Considering the band booked only a 13-date tour spanning a little more than two weeks, infections among the musicians necessitated that they keep changing personnel mid-stream. Things got a bit phishy by the time the tour rolled into Radio City Music Hall on October 2.

Even before the tour started, adjustments had to be made. The band’s founding bassist, Tony Markellis, died in April. Dezron Douglas, a classically trained double-bassist who first heard Phish in high school, became the band’s bassist in July. Saxophonist James Casey then announced that he needed to take a break from touring in order to undergo chemotherapy for colon cancer. Cochemea Gastelum began the tour as the replacement saxophonist. That lasted about a week.

Despite the band’s precautions, trumpeter Jennifer Hartswick disclosed on September 25 that she contracted a mild case of COVID, forcing the three-member brass section into quarantine. With both Casey and Hartwick out of play, the band planned to perform without horns for the remainder of the tour. Three days later, percussionist Russ Lawton revealed that he was COVID positive, just hours before the band’s show in Columbus, Ohio. Now suddenly without a horn section and a drummer, Anastasio fulfilled that evening’s gig with a solo acoustic performance. With Lawton on the bench for the rest of the tour, Phish’s Jon Fishman quickly stepped in from the reserves to replace Lawton for the subsequent dates.

The Trey Anastasio Band reached its tour-closing weekend at Radio City Music Hall, where all employees and ticket holders had to present proof of COVID vaccination in order to enter the building. This was the group’s first performance at the venue since 2018’s “A Concert for Island Relief,” a multi-artist concert benefitting hurricane relief efforts in Puerto Rico. By this time, the band was reduced to Anastasio on vocals and guitar, Ray Paczkowski on keyboards, Dezron Douglas on bass, Jon Fishman on drums, and Cyro Baptista on percussion. That meant that half of Phish and half of the Trey Anastasio Band would share the stage.

On the first night at Radio City, the repertoire was comprised mostly of Phish songs, perhaps due to Fishman’s lack of rehearsal time with the Trey Anastasio Band. Even so, Fishman provided instant innovation since Phish does not often perform “Plasma” or  “Lonely Trip.” This was also the first time Fishman ever performed on two Anastasio songs, “In Rounds” and “Cayman Review.”

Not counting Anastasio’s three solo songs in the encore, the Trey Anastasio Band performed 12 songs. Earlier shows in the tour had almost that many songs just in the first set. Here, however, the jams stretched even longer than usual, with “Mr. Completely” lasting 28 minutes, for instance. The sound of the band in general was different from past tours, with Douglas introducing hard funk bass lines and the missing horn section lacking the band’s usual touch of big-band jazz. The smaller lineup allowed the musicians more time to showcase their talents and even get playful and experimental, as when Baptista made bird calls and spun what might be described as a wind hose.

Despite all the abrupt changes that led to this point, the Trey Anastasio Band performed admirably. Even with many of the musical arrangements evolving on the spot, the band never seemed lost. Neither the musicians nor the audience were able to predict when a song would end. These were unique improvisational moments that will never be repeated again, not even on the second night at Radio City Music Hall.

With the Trey Anastasio Band ending its tumultuous tour at Radio City Music Hall, Anastasio and Fishman will attend to Phish matters. Phish’s Fall 2021 tour will begin in less than two weeks, on October 15 in Sacramento, California. Phish will return to New York City with its traditional four-night year-end run at Madison Square Garden, culminating on New Year’s Eve. Meanwhile, the downed members of the Trey Anastasio Band hopefully will recover from their ailments.