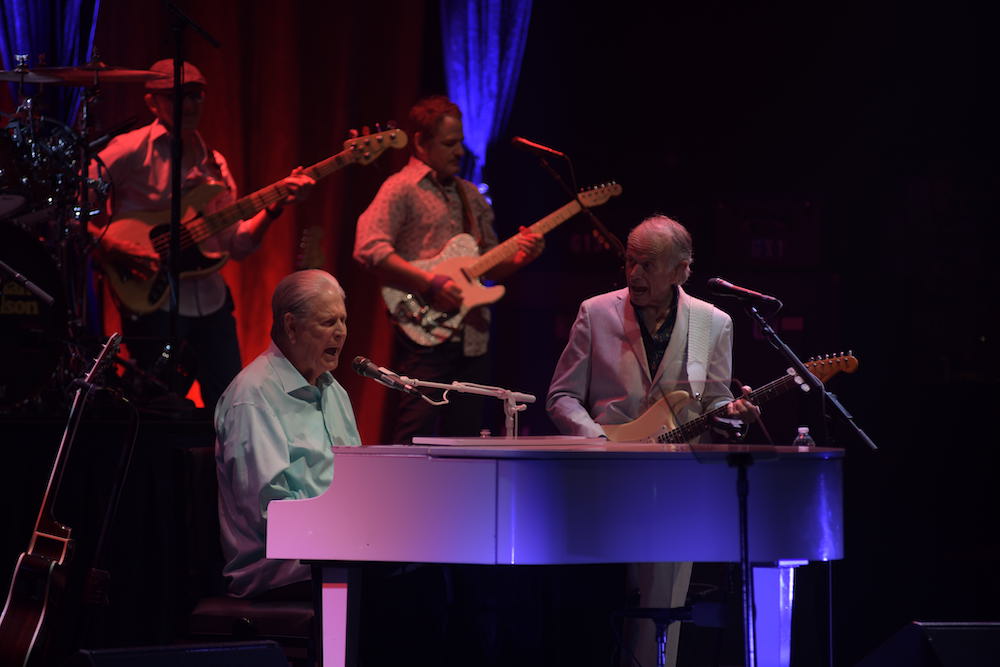 Brian Wilson sat centerstage at a white piano at the Capital Theatre wearing a light green shirt with fellow Beach Boy Al Jardine and son Matt Jardine flanking him left and right like royal guards to the rock and roll throne. With Wilson at the helm of the 10-piece band it was a team effort as lead vocals were shared by the Jardine’s, Blondie Chapman and keyboardist/musical director Darian Sahanaja, who sang a great version of “Darlin’.”

They played a full set of twenty-nine numbers on the Greatest Hits Live tour at the historic venue in Port Chester that also included some deep cuts from the Beach Boys recent Feel Flows box set released last month. Blondie Chapman, who was an integral part of the Beach Boys early seventies period and played on their Holland and So Tough albums, added an edgy soulful vibe to the bands polished performances.

They played all the big hits and included outtakes and alternates versions from the underrated Sunflower and Surfs Up albums of the early seventies that many rank as their best and last stab at greatness, at least before they turned into an oldies act after the success of the Endless Summer compilation in 1974. Drummer Dennis Wilson and guitarist Carl Wilson shine like beacons of hope on Feel Flows as they took over from big brother Brian who spent most of his time in his bedroom for those sessions.

Chapman summoned up the spirit of Carl Wilson who left us in 1998 with a rambling shoutout to the departed of – “Brother Carl, where are you tonight?” – before he took on the song “Feel Flows.” He sang a moody take on “Long Promised Road” and then unleashed some bluesy riffage from his black Fender Strat on “Sail on Sailor” pacing the stage and preening at the crowd like Keith Richards, whose band the Rolling Stones he sang backup for years.

Opening with “California Girls,” onto the big ones meant “I Get Around,” the car tunes “Little Deuce Coupe,” “Little Honda,” the beachy ballad “Surfer Girl” that Brian introduced as the first song he had ever written, to the upbeat rocker “Salt Lake City.” The band banged these out in succession. Playing off Wilson’s Phil Spector-inspired wall of sound, they gloriously recaptured the spirit, jangly guitars, and snappy beats that the studio house band, the Wrecking Crew, did on the original recordings.

Al Jardine sang lead vocals on “Wake the World” from the 1968 Friends album, transforming the band’s set into their late sixties/early seventies “Bearded Boys” period where they evolved from a surf band into a more spiritual and socially conscious one of the times. From the folksy harmonies on “Add Some Music to Your Day” to “Wouldn’t it Be Nice and “Sloop John B,” to “God Only Knows’ from Pet Sounds to the psychedelic mini symphony of “Good Vibrations,” the band morphed into a trippy rock and roll unit.

“Surfin’ U.S.A.” and “Fun, Fun, Fun” took us back to the beach and the reflective rock hymnal “Love and Mercy” from the 1988 solo album for the encore ending an incredible night from the maestro of sound, surf, and good vibrations.