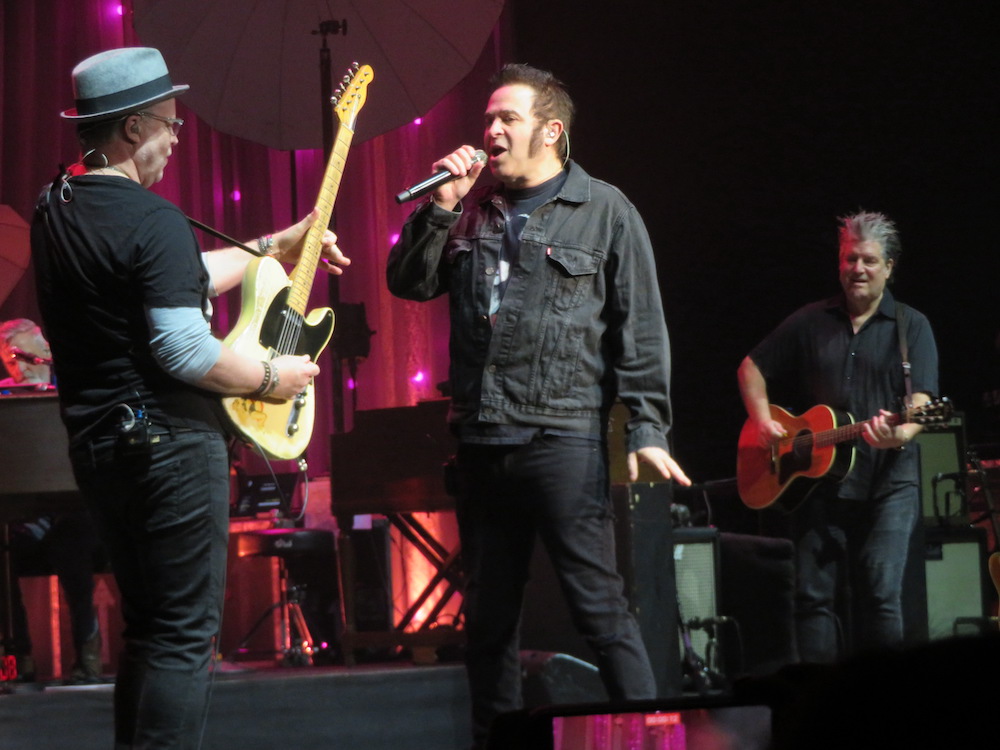 Adam Duritz, the lead singer of Counting Crows, is originally from California but has lived in New York City for several years. During the darkness of the pandemic period, he and his girlfriend visited a friend’s farm in the western English countryside. The radical change from cityscapes to rural pastures inspired him to do something he had not done in a very long time — write new music. He rented a keyboard and composed a suite of four songs, each one blending into the next as one composition.

This spark of creativity became an EP, Butter Miracle: Suite One, released on May 21, 2021. The EP is the first new music from Counting Crows since 2014’s Somewhere Under Wonderland. The EP also led to a Counting Crows concert tour, which landed at the Hammerstein Ballroom on October 5 and 6.

Counting Crows filled the ballroom’s expansive stage with vocalist Adam Duritz, guitarists David Bryson, David Immerglück, and Dan Vickrey, keyboardist Charlie Gillingham, bassist Millard Powers, and drummer Jim Bogios. The band is a rather large ensemble, yet the musicianship stayed sharp and never felt cluttered, even when a mandolin or an accordion was introduced for a song. The lighting was bright so that everyone on stage could be seen, and the sound was immaculate so that every instrument could be heard.

Counting Crows performed the four songs of Butter Miracle: Suite One as they were intended, with no interruption between songs. The songs packed hook lines and lilting melodies, the same key factors that powered many of the band’s earlier hits. Otherwise, the set included a slew of Counting Crows’ most familiar songs.

“When Adam brought the new songs to us, we recorded them separately and did not see how they would seam together,” David Immerglück told The Manhattan Beat after the show. “Once we saw how the editing sewed the pieces together, it was like ‘aha, this works!'”

The magic in the performance was in Duritz’s emotive singing and how the band magnified that passion. Throughout the set, Duritz and the musicians served each other’s purpose, making sweet music that seemed to express deep longing and optimism — even when Duritz introduced “Earthquake Driver” by saying “I don’t know what this song is about either.” By the way, Adam, some of us would like to know if the song that followed, “If I Could Give All My Love -or- Richard Manuel Is Dead,” is really about the vocalist and keyboard player of the Band.

Counting Crows’ set closed with “A Long December,” which received enthusiastic singing from the audience. Frank Turner, who performed earlier as the support act without his band, the Sleeping Souls, joined Counting Crows for the encore, even singing some of the lead vocals on “Hangin’ Around.” As the band gathered for a final bow, the musicians and the audience sang “Happy Birthday to You” to guitarist David Bryson. That moment was not listed on the band’s set list.

Duritz has said in interviews that he returned to the farm and wrote another four songs which may become Butter Miracle: Suite Two. Fans had to wait seven years for the first suite and its accompanying tour. If Duritz can workshop the new material soon, the fans might not have to wait very long for a second suite and tour.