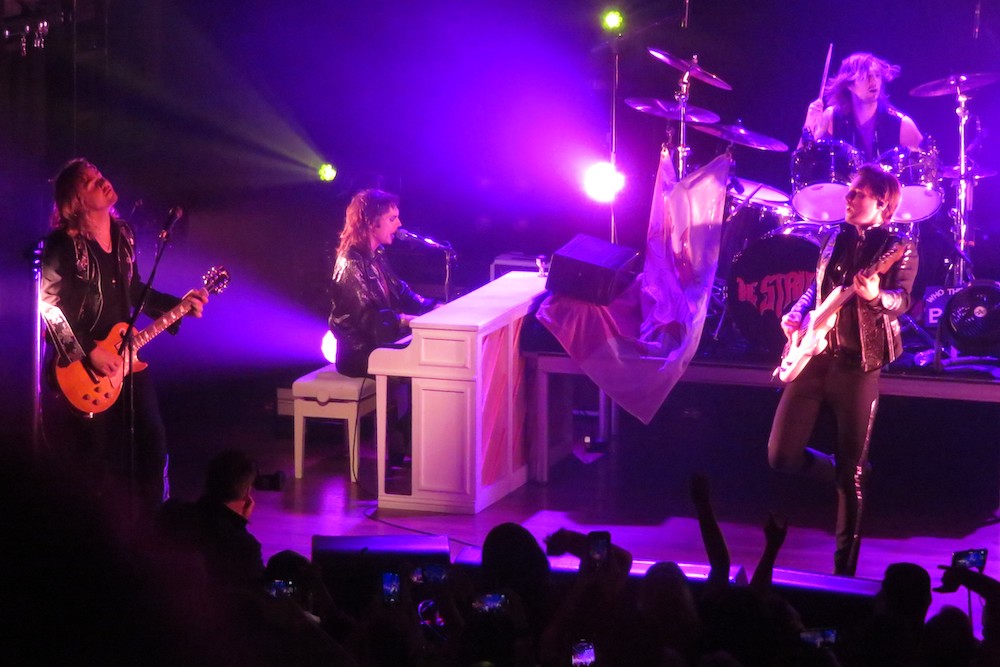 Maybe it was a generation ago, but there was a time when rock bands that wanted to be rock stars dressed and acted on stage as if they were already stars. Nowadays, most musicians are indistinguishable from the team that changes the oil and rotates the tires on your vehicle. Will the glamorous days of rock ever return? Meet the Struts, a band that plays as well as it poses, and a band that is poised for rock stardom.

Formed in England in 2012, the Struts found success at home before seeking fortune in America in 2015 by relocating to Los Angeles, California. Now with the release of a third album, Strange Days, and a headlining tour of large halls and small theaters, the Struts are reaching a wider audience. The band presently consists of vocalist Luke Spiller, guitarist Adam Slack, bassist Jed Elliott, and drummer Gethin Davies.

At Irving Plaza on October 8, following a set by glam rockers Starbenders, the production crew was clever enough to play classic rock songs over the speakers leading to the Struts’ show time. With younger fans pressed against the front railing and older fans hanging closer to the bar in the back of the venue, quite a variety of music fans sang along with the choruses, even though many in front were not yet born when those songs became the hard rock soundtrack of the 20th century. The mood was set for when the lights dimmed and the Struts sauntered onstage.

Throughout the concert, Spiller worked on building a human connection with the audience. He introduced many songs with a quick reference point. “The next song is about my favorite thing,” he said before the band launched into “Dirty Sexy Money” with him. Before “Mary Go Round,” Spiller told the audience, “the last song was the foreplay and now we’re gonna turn down the lights, so get out your phones,” as the band played the song mostly under the light of the fans’ cell phones. Spiller encouraged sing-alongs, led a left-right cheering contest, and asked the audience to crouch and leap during one song. The fans were eager to comply.

Parallels to Queen are forgivable. From start to finish, Spiller sang a wide vocal range powerfully, much like Freddie Mercury, and even looked a bit like early Mercury. Spiller commanded the stage from the moment he landed, a natural performer who thrived on the audience’s cheers. The rest of the band rocked well while also impressing visually with flashy outfits and exaggerated rock star moves. Fortunately, the band had the songs and the chops to warrant a comparison to Queen.

The Struts’ set list consisted of hook-driven, hard-rocking songs from the band’s three albums and three EPs. The set included four songs from the band’s current album, Strange Days, recorded during the pandemic. Spiller started the title song solo on the piano and built to a bombastic climax. The song’s chorus continued to be appropriate.

As the band prepared to close the set, Spiller asked the audience, “Who’s willing to see the Struts again? Raise your hands.” The generous response indicated that indeed the Struts is on its way to superstardom