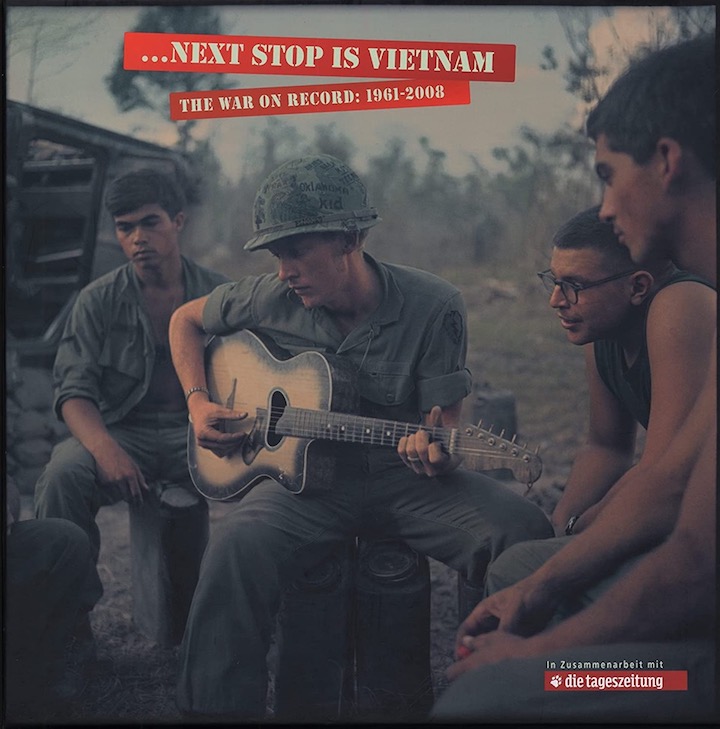 On The Record: ‘Next Stop Is Vietnam,’ plus Kinky Friedman & Billy Joe Shaver

As I observed in a 2018 review of Battleground Korea: Songs and Sounds of America’s Forgotten War, Motown artist Edwin Starr got it wrong when he sang, “War, what is it good for? Absolutely nothin’.” True, war isn’t good for much, but conflicts like the Spanish Civil War, World War II, and the Korean War have at least resulted in a whole lot of memorable music.

Then there’s the Vietnam War, whose music is documented on the sprawling …Next Stop Is Vietnam/The War on Record: 1961–2008, a box set that delivers more than 330 rock, pop, folk, blues, soul, gospel, reggae, Motown, country, R&B, and spoken-word tracks on 13 CDs. (A 14th disc contains lyrics to every song on downloadable PDFs.) First released in 2010, this collection from Germany’s Bear Family label now has a new U.S. distributor, which should ease the purchasing process for American customers.

If you think this country has never been as divided as it is today, just listen to this superb box, which contains nearly 17 hours’ worth of music culled from a list of about 4,000 Vietnam War–related songs. It includes many tunes that deliver protests against America’s role in that conflict and many generally lesser-known numbers that attempt to rally support for it.

Some in the latter group, incidentally, come from rather surprising sources: Jack Sanders’s pro-war “The Viet Nam Blues,” for example, was the first Kris Kristofferson song ever recorded. (Kristofferson, an Army veteran, later turned against the war.) “The Ballad of the Yellow Berets,” a protest against antiwar protesters, was an early effort by Bob Seger.

Nearly all the well-known Vietnam War–related songs are here: Bob Dylan’s “Masters of War,” John Prine’s “Sam Stone,” Phil Ochs’s “I Ain’t Marching Anymore,” Staff Sgt. Barry Sadler’s “Ballad of the Green Berets,” Merle Haggard’s “Okie from Muskogee,” the Doors’ “The Unknown Soldier,” the Plastic Ono Band’s “Give Peace a Chance,” and Country Joe & the Fish’s “I-Feel-Like-I’m-Fixin’-to-Die Rag” (whose lyrics the box’s title quotes), to name a few. The anthology even includes a few famous tunes that were not intended to be about Vietnam but became popular with troops there because the words sounded relevant, including Peter, Paul & Mary’s “Leaving on a Jet Plane” and “We Gotta Get Out of This Place” (the latter in a version by Paul Revere & the Raiders because the Animals’ hit rendition was unavailable due to licensing issues).

But all of that is just for starters. What really makes this box shine are the many obscurities that the compilers have dug up – rarely heard songs like “The Real Silent Majority” by George Jay, “Goodbye Travis Air Force Base,” by Hershel Gober, “Keep Our Country Free,” by Tommy Kizziah, “Ballad of Two Brothers,” by Autry Inman & Bob Luman, “The Kent State Massacre” by Barbara Dane, and literally hundreds more. The set devotes two whole discs to songs sung by Vietnam veterans. Also here are previously unreleased tunes recorded during the war by soldiers in Vietnam and, as the dates in the title indicate, even some numbers that first appeared many years after the conflict ended.

Sometimes both sides of the argument are represented by variations on the same song, such as with Buffy Sainte-Marie’s “The Universal Soldier,” which is followed in the program by the inane “The Universal Coward,” by Jan Berry of Jan and Dean fame. (Dean was reportedly so turned off by the lyrics that he didn’t want his name on the record.) Barry McGuire’s chart-topping “Eve of Destruction,” meanwhile, is paired with the Spokesmen’s lesser-known answer song, “The Dawn of Correction.”

There’s also Victor Lundberg’s spoken-word “An Open Letter to My Teenage Son,” which ends with the father declaring that he loves his boy “but I also love our country… and if you decide to burn your draft card, then burn your birth certificate at the same time. From that moment on, I have no son!” This prompted two answer records, both featured here, one of which – “A Letter to Dad” by Every Father’s Teenage Son – ends with the speaker proclaiming that if he chooses to burn his draft card, “Then, Dad, it will be you who will have to burn my birth certificate… Although you stopped calling me Son, I’ll never stop calling you Dad.”

Other fascinating pairings abound. A broadcast from North Vietnam to U.S. soldiers by a woman known as Hanoi Hannah, for example, precedes a song called “Hanoi Hannah” by Roger McGuinn. An excerpt from Jane Fonda’s Hanoi press conference is followed by a number called “Hanoi Jane” that describes her as “a traitor to America” with “Communistic brains.” “Senator McCarthy for President (If You Love Your Country)” by Peter, Paul and Mary is followed by a statement on Vietnam by the Minnesota senator.

In addition to pairings, there are parodies. A singer named Dolf Droge, for instance, offers a sendup of “Winter Wonderland” called “Southeast Asia’s Disneyland,” while unnamed vocalists perform “Battle Hymn of the Republic of Vietnam” and singer Dave McKay serves up “I Fly the Line,” a takeoff on Johnny Cash’s “I Walk the Line.” Meanwhile, a trio consisting of Bull Durham, Chuck Rosenberg, and Saul Broudy deliver “Played Around and Stayed Around Vietnam Too Long,” a parody of Billy Grammer’s “Gotta Travel On.”

One particularly prescient sound bite comes from Oregon Senator Wayne Morse, who declares in August 1964: “One thing I do know, and that is we’re going to be bogged down in Southeast Asia for years to come if we follow this course of action, and we’re going to kill thousands of American boys until finally…the American people are going to say what the French people finally said: they’ve had enough.”

An accompanying 304-page, LP-sized hardcover book, which includes an introduction by Country Joe McDonald, enriches the listening experience. Among its contents: an article about how the collection was compiled and organized, a history of the war, detailed notes about every track and artist, a scrapbook of Vietnam War photos, and alphabetical lists of all the artists and songs.

If you try hard, you can think of a few recordings that should have been included in this box but weren’t, such as Crosby, Stills, Nash & Young’s “Ohio” (though a featured medley by a group called Coast incorporates snippets from it) and Bruce Springsteen’s “Born in the U.S.A.” (though his “Galveston Bay” is here). Given the meticulous research that obviously went into compiling this collection, it’s likely that such omissions resulted from licensing issues rather than oversights.

Either way, this is a quibble. The immersive Next Stop Is Vietnam is loaded with memorable music and food for thought about the war and its lasting impact on America. No other collection on the subject comes anywhere near it in quality or scope and it’s safe to say that none ever will. In fact, it’s no stretch to call this one of the most comprehensive and imaginatively assembled box sets ever released on any subject.

Billy Joe Shaver, who died in 2020, ranked in the top tier of Texas singer/songwriters, thanks to numbers like “Honky Tonk Heroes” and “Old Five and Dimers Like Me.” The inimitable Kinky Friedman’s catalog is just as good, though the quality of songs like “Western Union Wire” and “Sold American” is sometimes underappreciated amid by his pervasively tongue-in-cheek approach.

Shaver was in a bad place in 2002. Not only had he recently lost his mother, wife, and son; he’d also suffered a heart attack. Friedman concluded that the best thing for him was to “get out and have a good time,” and he convinced his friend to join him on a tour that year of Australia, where the pair took turns delivering their best-known tunes.

The 21-song Live Down Under captures highlights from that concert series’s three-night stand in Sydney, during which these two masters are at the top of their form. The hour-long recording embraces all the aforementioned numbers plus Shaver’s “Old Chunk of Coal” and “Georgia on a Fast Train,” Friedman’s “Rapid City, South Dakota” and “Before All Hell Breaks Loose,” and more. You’ll smile, you’ll laugh, you’ll be touched, and you’ll sing along; and when the music ends, you’ll want to hear it all again.