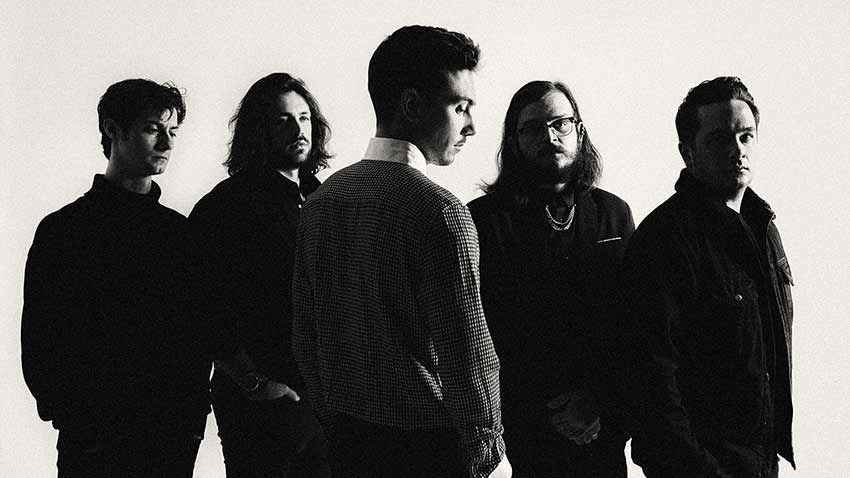 Grayscale. Stone Pony. November 5. You have to be there. It’s going to be amazing. Trust us… and if not us, Grayscale’s vocalist, Collin Walsh.

Some of our favorite bands and greatest friends have come out of the Philadelphia area. Whether it’s Low Cut Connie’s keyboard-demolishing Adam Weiner or the stylish musicianship of duel frontmen Daryl Hall and John Oates, Philly has been good to The Aquarian in more ways than we can think.

Although, there is one band whose alternative rock sound has been honed in on as of late, taking shape through lyrics, riffs, media, and just about everything else. The band, Grayscale, have been on our radar and in our lives for years, but it’s the last iteration of the band that has captured our attention like never before. The energy and emotion is palpable on their latest album, Umbra, and their desire to depict the fierce realities of everyday is seen and felt on every single track.

Now hitting the road with said record in their back pocket, Grayscale have even more music to share with their ever-growing audience. Local legends with an intense fan base, they are sure to fill the room at The Stone Pony on November 5. It’s a show that is a must-see for them as much as all of you who are either just getting on the Grayscale train or are waiting to get your tickets. (Do not wait any longer!) The band is excited for this highly-anticipated run of dates, so chatting with frontman Collin Walsh only solidified the fact that we are equally as excited for this in-person Jersey Shore show.

The Stone Pony might be an iconic New Jersey venue, but it’s awfully close to Philadelphia – the beloved city of Grayscale. Because of how immense your following was (and is) in the local scene, does performing at the Pony feel a bit like a hometown show?

For sure. While Philly is our home and a very special place to us, Asbury Park also has that east coast energy you can’t explain. We have loved playing shows in Asbury since we started, and plan to continue doing so; we really feel the love whenever we roll thru.

This show on November 5 at The Stone Pony is one of the first on this run of dates. While you’ve been doing live shows this year and for the past many years, I can imagine there is a different kind of ambiance headlining a tour during such an odd time for live events. How are you heading into this tour and what about being on the road wholly and fully again are you excited about?

We are very very excited. We’ve become an evolved version of ourselves throughout the time locked down together. While things are still slowly getting back to normal, we’re really looking forward to our fans seeing our live shows and watching ‘Umbra’ be performed live in its entirety.

The pop punk genre, in a variety of ways, has had a resurgence over the last year or two. You and your band have been doing this, though, releasing three full-length records in the last four years. To you, Collin, where does Grayscale stand in the latest incarnation of pop punk, emo, and alternative rock?

I think it’s cool that that genre has seen a surge recently. That being said m, we do not identify with the genre of pop punk at all. I think because of the touring we did early on with our first record, we were previously placed in that realm. However, our band is not a pop punk band whatsoever – if I had to put it into a bucket, I’d call it “alternative” or “alternative rock”. We like to write rock songs, pop songs, and ballads.

Speaking of albums, you’re taking Umbra on the road. This latest album is entertaining and thrilling to listen to, but also soul-stirring (in our opinion). Is there a song or two from the record that you think are exceptional more so than ever when brought to life on stage and experienced in person?

Thank you for the kind words! I think “Without You” and “Dreamcatcher” are two that I really cannot wait to perform live – they’re both songs that feel spiritual when playing them.

Because you are such enchanting and natural performers, I, personally, was happy to see your music video for “Dirty Bombs” early this past summer. The rock song and its video are the perfect balance of onstage thrills and genuine, talent-based musicality. Why did this video pre-Umbra take the more performance route as opposed to, say, an immersive-as-hell and effortlessly-heartbreaking storyline (and lyrics) like “Live Again”?

The direction for those respective videos was sort of determined by the songs themselves. “Dirty Bombs” is a song so much more driven by attitude, while “Live Again” lends itself to much more of a storytelling type narrative for the video due to the story that’s being told lyrically. Our creative director Jordan did such a great job taking the core of those songs, and expanding upon them visually.

Something about this modern rock community that you’re in feels so friendship based.  The tours you have gone on (such as alongside The Maine and Sad Summer Fest), the supporting acts you work with, and everything in between comes across like its simply friends hanging out and doing what they love. Is that really how it is? What about that do you appreciate for both yourself and Grayscale?

Touring is a wonderful thing. It is absolutely exhausting, but also extremely rewarding in the most tangible way. Among that, friendships with your peers become very real over time – The Maine are a band we have always loved and now have the privilege to call our good friends. While traveling for a living is beautiful, it also can be lonely at times. To have good people within your own group as well as the groups you are touring with is huge and healthy for everyone involved.

TO CATCH GRAYSCALE ON TOUR, INCLUDING THEIR 11/5 DATE AT THE STONE PONY, CLICK HERE!