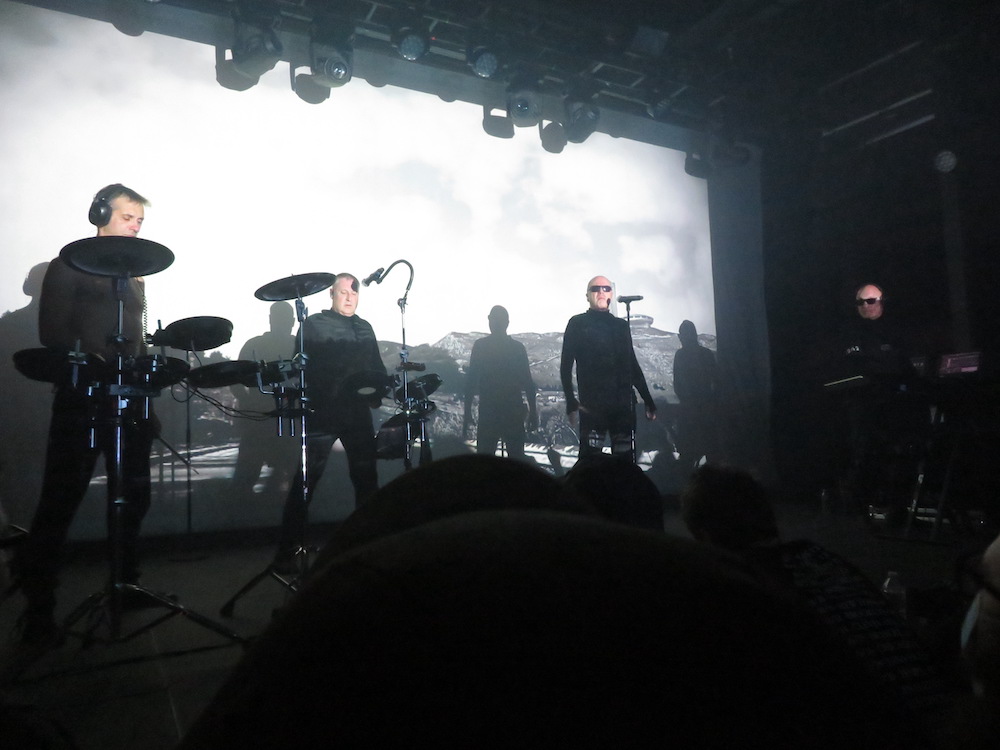 Front 242 is intentionally a mysterious and somewhat anonymous band. Front 242 might not even be a band in a traditional sense. Based in Belgium, the collective’s contributors often work independently on projects and sometimes bring those efforts to the others where such collaborations become Front 242 songs. Very often, the musicians are simultaneously recording music for other outfits as well.

Since forming in Belgium in 1981, Front 242 embraced a style of music that would eventually become a genre known as EBM, electronic body music. The band and its music would help reshape the electronic, industrial, and gothic music genres with its dark and danceable synthesizer and percussion grooves. This music also contributed to the underground “rivethead” culture in the 1990s.

Onstage at Elsewhere Hall, Front 242 maintained its rivethead fashion, wearing military flak jackets and crew cuts, along with black trousers and dark sunglasses. The four musicians on stage played hard and heavy electro-industrial songs accompanied by rivethead-style post-apocalyptic and dystopian video projections inspired by science fiction. As the projections were also projected onto the musicians, very often the visuals on the screen included unintentional shadow play as the musicians danced to their own music. From the start, Jean-Luc De Meyer and Richard 23 (Richard Jonckheere) traded vocals, with De Meyer singing the more gutteral vocals, while shining flashlights into the audience and bouncing energetically to the stark, somewhat harsh rhythms of keyboardist Patrick Codenys and percussionist Tim Kroker.

Considering the multi-layered thickness of current EBM music and the lavish productions of current dance music producers, Front 242’s performance was raw and even primitive. The bare-boned music was devoid of guitars and bass, entirely performed on synthesizers, percussion and pre-programmed click tracks, with bristling vocals that were ominous, abrasive and menacing. The aggressive music throbbed harder, darker, and edgier than what is played typically at dance clubs.

In recent years, Front 242 toured several times performing its best-known tracks and no new material. This time, the set included the favorites plus newer songs and some older songs which have never been played live or have not been played in several decades. It was a retrospect with a look to the future or a still thriving ensemble. Even after 40 years as a unit, Front 242 proved at Elsewhere Hall that it remains a paradigm for the electro-industrial underground.