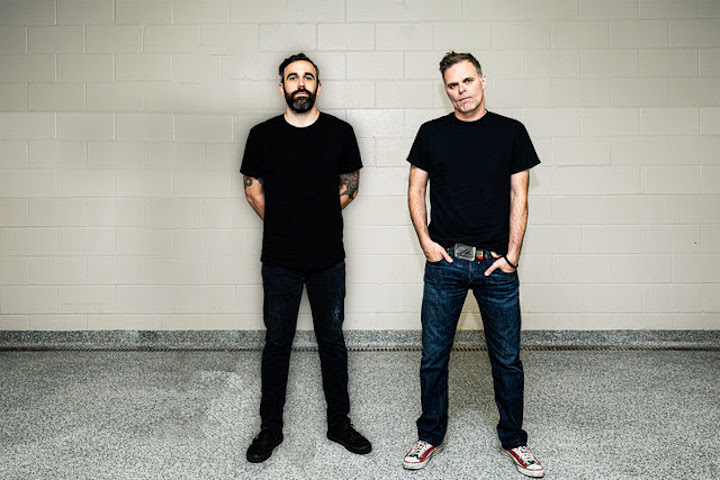 During the heat of the COVID-19 pandemic last year, one of the few things keeping live music alive while the stages were barren was live streaming.

All over the world singer-songwriters, rappers, and bands were performing to digital audiences either through social media, Zoom, or other platforms. Zion, Illinois rock legends Local H dove into this medium performing cover songs for their fans – and it eventually evolved into a record called Awesome Quarantine Mixtape #3 that came out a few weeks ago via Brutal Panda Records.

Along with their ninth studio album, Lifers, being release in April 2020, the duo of guitarist / vocalist Scott Lucas and drummer Ryan Harding are currently back on the road after a few weeks off of it due to testing positive for the virus. As part of the re-expedition, Local H will be performing at (le) Poisson Rouge in New York City on October 27 with St. Joseph, Missouri’s brotherly punks Radkey opening up the show.

Lucas and I had a talk about how the “quarantine mixtape” came to be, how it was easier to record as a duo, people not caring about the current situation, and not being done with their latest studio album just yet.

When it comes to putting out a covers album, is there a certain process you use to choose which songs you’re going to record?

Not usually, but there was with the new one. The idea was that during lockdown we started posting these cover songs on a near daily basis and the vision behind this record was to include those songs. It had to be the ones that we played during the quarantine so that was the process for this one. The songs were chosen randomly sort of by the day and we did a bunch of songs that would signify which day of the week it was. If it was Sunday, we did “Sunday Morning Coming Down” by Kris Kristofferson or “Ugly Sunday” by Mark Lanegan, which ended up on the record.

When Adam Schlesinger from Fountains Of Wayne died last year, we did one of their songs. It was just those kinds of things that would happen day to day and we’d pick a song that felt right for the day. We took the best songs from that time and recorded those for the mixtape.

How were the recording sessions at Million Yen Studios in Chicago for the Awesome Quarantine Mixtape #3? Were you wearing masks and getting tested every day or did you want until it was possible to get vaccinated before you went into the studio?

I think the sessions were done before we got vaccinated, but I don’t fully remember. I remember that Andy Gerber, who runs Million Yen, was keeping the sessions with masks on. We’re all friends, we know each other, we all got tested, and we took care of each other. There’s only Ryan and I in the band and Andy was the only other guy in the studio so everything with us is already pretty scaled back and we were kind of each in our own pods. It was a situation where there’s not a lot of people coming in and out and we don’t really work that way either with a pandemic or without a pandemic, so we’re kind of custom made for this crap I guess.

You mentioned earlier that while in quarantine, you were live streaming cover songs from various areas of your home nearly every day. Looking back at that time, what’s your thoughts on the viability of live streaming?

I think I learned a lot about it’s worth during that time. When the pandemic started and there was this idea of people recording stuff from their homes, I saw someone do it for the first time I figured they already did it so what’s the point? I was thinking of it in that way as if it was a race or something. Once we started doing it, the reaction was pretty grateful and people were thanking us for doing it. The thing about it was that it was more for me than anybody else and it gave me something to do. It’s nice that people appreciated it and it was nice that people watched it, but I think I was the biggest beneficiary from doing that stuff.

How has it been being back on the road so far supporting your most recent studio album Lifers that came out in April of last year? Do you notice any differences in the vibe of the audience versus how they were before the pandemic?

Yeah, it’s weird. I don’t like it – it’s strange. We were told that things wouldn’t go back to normal like flipping on a lightswitch and I think that’s really true and I’ve seen that. It’s this process of getting back to this idea of what is normal and maybe we’ll never get back to it. As far as playing live and touring, that’s a huge bummer to me and it’s starting to make me realize that maybe touring for a band like us is over.

It just doesn’t seem to really work anymore. Things have been a bit different on this headline tour we’ve been on despite the obstacles but when it comes to people giving a fuck and getting together to make a show happen, cooperating and agreeing on a set of rules to keep a club open, nobody seems to want to do that unless they’re going to see some huge band. Nobody gives a fuck. I don’t really know if anybody cares and I don’t know if a band like us would be able to survive in this environment. Maybe I’ll get another job, I don’t know, but it’s not pretty out there and nobody seems to give a fuck, so I don’t know what to do.

I can understand where you’re coming from especially with the Delta variant still being around and how venues have been handling everything.

What are Local H’s plans after this current tour with Radkey? Do you plan on working on a new album, do you plan on playing it by ear or are you going to take time to think about things?

I’m just a guy who takes it day by day. The thing about this tour is that this is the tour that we’ve been wanting to do for the Lifers record, which at this point is over a year old. We’re still of the mindset that we still have to get this record out of our system and tour it and play it. That was never the plan to put out a record and let it sit, the plan was to put it out and go out on tour and that’s the way we’ve always done things. We still have this record in our bloodstream so I’ve got this stuff in me and it doesn’t feel like it’s out yet.

I can’t even think of a new record and what’s the point? Right? What’s the fuckin’ point? I don’t know, we’ll see how it goes.

LOCAL H’S NYC TOUR DATE IS TONIGHT, 10/27, AT (LE) POISSON ROUGE. FOR TICKETS AND DETAILS ON THAT AND MORE, CLICK HERE!