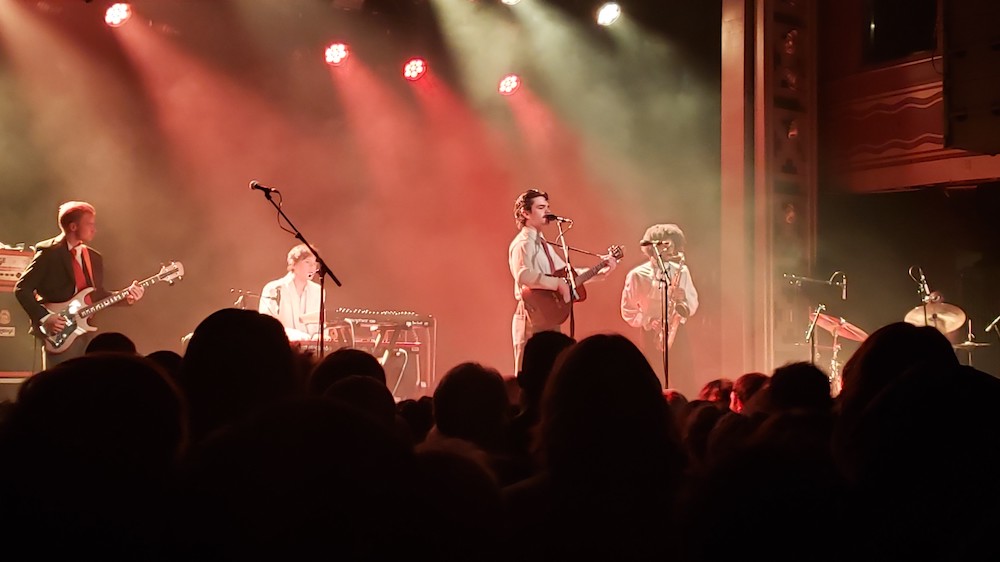 As Black Midi first came on stage at Webster Hall, an anonymous voice spoke through the public address as if announcing a boxing match, telling the audience that it was about to witness “the undefeated, the reigning champions, black hellfire midi.” We then heard Frank Sinatra’s version of “Theme from New York, New York” as the musicians took their positions. Even after the band started its first song, “953,” Greep repeatedly sang lines from “Theme from New York, New York.” The band started rocking and the exuberant audience responded by bouncing so hard to the beat that the floor rattled like a diving board, prohibiting the photographers in the pit from steadying their cameras for a good shot.

Since the band’s New York debut at the Bowery Ballroom in 2019, Black Midi (often stylized in all lowercase letters) has gone through fundamental changes in personnel. The core group, formed as a quartet in 2017 in London, England, is now reduced to three musicians, vocalist Geordie Greep, bassist Cameron Picton, and drummer Morgan Simpson. Greep announced on social media this past January 15 that founding guitarist Matt Kwasniewski-Kelvin was taking a mental health hiatus. Keyboardist Seth Evans and saxophone player Kaidi Akinnibi began contributing to the band in 2019 and now, after a forced pandemic vacation, continue as part of Black Midi’s touring ensemble. Being that Black Midi is rooted in experimental music, the band embraced these modifications, altering the live versions of many early songs so they differed from the arrangements on the recorded versions.

Of the 14 songs performed, five were from Black Midi’s second and most recent studio album, Cavalcade, released on May 26, 2021. With many of the songs powered by improvisational jamming, often led by guitar, saxophone, and keyboard, it hardly mattered which songs were played. Free jazz, math rock, progressive rock, punk, and indie mixed frequently within the same composition. The music occasionally grew chaotic and was held together by the rhythm section. The music was as aggressive and pugnacious as Greep’s onstage manners.

At the conclusion of a song midway through the set, Greep coaxed Evans to stand. When Evans stood, Greep began punching him. A seemingly startled Evans fought back and the two wrestled to the ground. Other band members separated them. Greep returned to the microphone and told the audience, “I am a professional and I will finish the set, but afterwards I never want to see these guys again.”

What was the matter with Greep that night? Was the fist fight real or was it staged? At the end of the concert, Greep shouted at the fans that they were all sinners and going to hell, leaving the stage and not responding to calls for an encore.