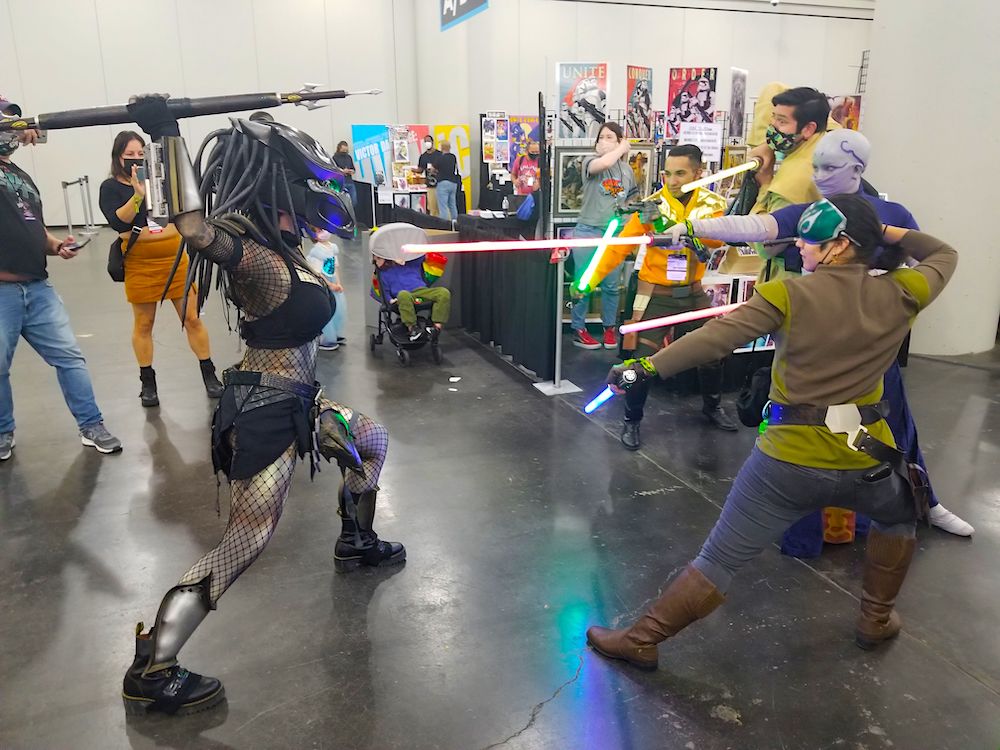 I have religiously attended New York Comic Con since it began back in 2006. The only time I have missed it was when I fell seriously ill one year. That’s a pretty solid track record. However, in 2020 we didn’t have one due to the pandemic, and this year I was feeling trepidation because I hadn’t gone to any major events all year and this one was going to be big.

Event producers ReedPop took safety even more seriously at NYCC this year. You had to be masked and vaxxed and provide proof of vaccination before you could step foot on the convention floor. One vendor got kicked out because he and his staff would not stay masked. I had heard that a few people had been ousted for not complying with the same ordinance. I would say mask wearing generally hovered around 85% for the weekend – that’s including people taking short breaks from wearing them – which is quite good considering there are a lot of public events where that is very much the opposite reality.

It initially felt daunting at first to be going to an event that I later found out 150,000 people attended. Granted that’s down from reported attendance two years ago of 260,000, but that’s still a lot of people in our COVID era. I felt more at ease on Thursday and Friday because attendance was a bit lower. Over the weekend, it definitely doubled or even tripled at certain points, but given that most people were good about wearing their masks, I felt comfortable. It was also a hell of a lot easier to move around on the floor, check out various booths, peruse merch, and dive into the back issue bins.

Yes, it was strange not to see the major comic book publishers and many comics indies there. Yes, many movie studios were absent both in terms of interactive booths and talent interviews. And yes, there were not as many major panels or screenings. However, there was a still a healthy number of vendors, a lot of different panels (some were virtual), and some of us were lucky enough to watch a surprise screening of Ghostbusters: Afterlife following the panel with Jason Reitman and many of the stars. (Check it out. It’s a good sequel to the original films.)

Despite being scaled down a bit, this was still a great way for New York Comic Con to come back. There was a perpetual parade of colorful cosplayers; plenty of booths with toys, comics, T-shirts, and other merch; an eclectic variety of food trucks outside; and interactive or immersive displays like the defaced Chucky ice cream van, the Star Trek: Prodigy video game simulation, Funimation’s Sakura Park, and Doom Patrol and Sandman booths.

There were dozens of talented artists and writers to meet and purchase items from in Artist Alley. One could still find good back issue and graphic novel deals, although the last hour “fire sale” that often happens on Sunday, when many vendors just want to dump stuff and drop their prices precipitously, did not occur this year. However, I was happy I was still able to support them.

Further, the Javits Center has expanded with a sleek, new, multi-story wing on the north side of the building where it seems panels and screenings will be held in the future. That should help alleviate the frequent foot traffic congestion usually found on the main floor on the weekends.

Overall, New York Comic Con 2021 was a success. I’m actually glad that we didn’t dive back into it full whirl because that would have been a little too much too soon. But even at its reduced capacity, this was still a fun time. You could see it on people’s faces. Following is a video montage of footage I collected during my four days at NYCC 2021. Major props to my friend Stephen Montagna for helping to edit the footage and doing the post-production on this fast-paced, three-minute piece that I hope will give you a sense of the energy and enthusiasm to be encountered at the annual event. The AC/DC-influenced song “Rookie Of The Year” is by Bobo Renthlei and has been licensed from Soundstripe.