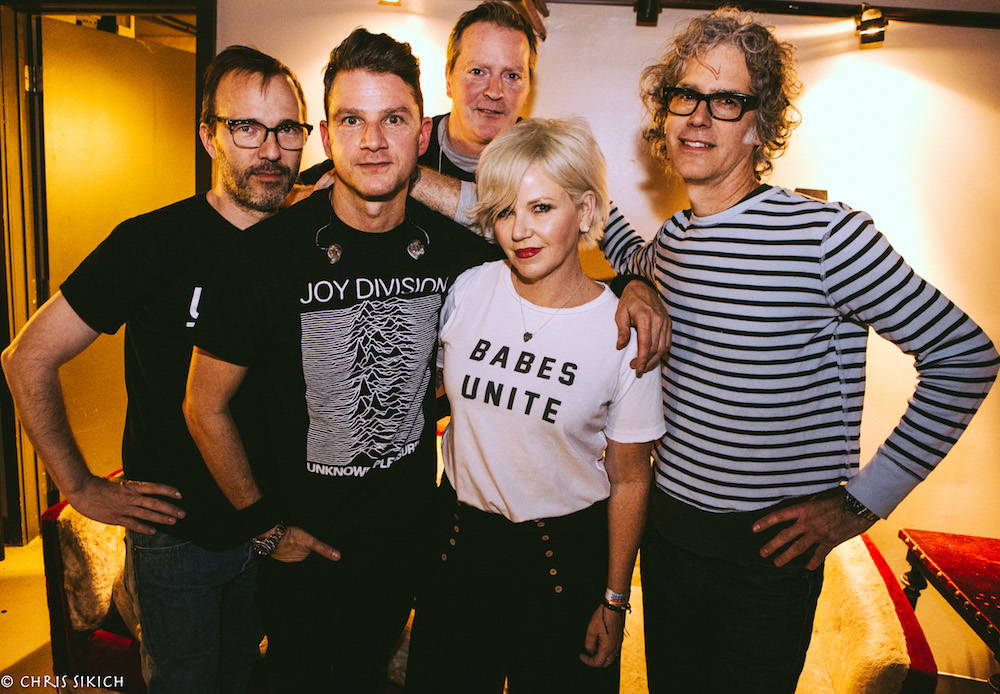 Letters to Cleo Find Their Way Back to Happiness, Excitement, & In-Person Stages

About five years ago, Letters to Cleo reunited, released an EP, followed it up two years later with a Christmas EP, began working on a full-length LP, and then watched a health crisis take over the globe. Where they’re at now with writing and recording isn’t imperative, because either way, the band is taking on the Big Apple on November 16.

Whether you know them as the band who expertly covered Cheap Trick’s “I Want You To Want Me” in the 1999 cult classic 10 Things I Hate About You or as the band whose immense influence has flown uniquely under the radar since the millennium hit, Letters to Cleo is an undeniable alternative rock staple. The group is effervescent and melodic in their work with onstage prowess and offstage compassion that creates a sense of self in every single song they’ve ever released. Their first album, Aurora Gory Alice, depicted the band as a pop rock outfit living in the wake of Nirvana’s Nevermind and bridging the gap between The Go-Go’s musicality and front woman Kay Hanley’s soaring pop vocals. Two more LPs, some TV and movie soundtrack placement, an extended hiatus, another set of EPs, and a pandemic later, the edgy, albeit strikingly harmonious band is back with music, art, love, hope, wisdom, and pure, unadulterated entertainment to share.

In 2021, Letters to Cleo are still glittering, versatile, and, simply put, fun as hell to listen to. With the largest fire lit underneath them than possibly ever before, this band is more than ready to take on The Bowery Ballroom next week. (To which, in our conversation, frontwoman Hanley responded with, “It’s a week away. Oh my God… it’s a week away!”)

The tour you are currently about to embark on is one with a holiday season edge to it. Tell me about what fans new and old can expect from this run of shows, including our local one at New York City’s Bowery Ballroom.

Oh, I don’t know about you, but like I forget what it’s like to just feel comfortable in a club. This is a place – clubs are a place – where where I have felt most at home since I was 18 years old with my first band. To have that removed was really kind of scary, you know what I mean? I imagine it’s that way for like so many of us and so much of everything we took for granted that was just ripped from us. It’s going to be an experience for everyone there and I ultimately think that’s fantastic. Whenever I take something for granted, it’s sometimes for the best that I’ve got my expectations shaken up. This is definitely one of those occasions. I am terrified, but that that’s really good.

I think it’s going to be a really, really spectacular night for you guys and for everyone involved. I know Tracy Bonham in her own genre-bending glory is taking the Bowery’s stage alongside you guys next week. Are you all friends and peers? Because this ticket just seems like a match made in heaven!

I’m so glad to hear you say that, because this is the first time that I’m speaking to anybody about the bill, so to hear you describe it in that way is really exciting for me. Tracy and Cleo haven’t played together in a long time, but we used to play together all the time in the nineties. I’ve been friends with Tracy since 1994, probably, so over 25 years! Not only is she a friend, but we’re just such admirers of her songwriting and her musicianship. It’s going to be really fun. We may even play some songs together.

That would be amazing. Kay, you mentioned that you’re a big fan of Tracy’s songwriting, but I think a lot of people look to Letters to Cleo as a group with musical capabilities and songwriting talents that exceed expectations, especially for a rock band adjacent. For you, as a substantial songwriter, what is it like having lyrics play such a role in your life?

Oh, geez. What a great question. No one ever asks about lyrics and to me that’s the most important part. I’m such a fan of lyrics. Growing up, I took piano lessons for six years when and I just stopped piano because I never understood it, never got it. A song, though… if I heard a song on the radio, I remembered every lyric. I have always devoured lyrics and I didn’t realize that that was my secret power until well after I actually started writing them myself. My love of lyrics, my love of lyricists, is just really important to me.

I’ve been chatting with a lot of musicians as of late who are finally getting back in the swing of things, as well. They’re feeling the same things or, like yourself, had to push through to safely overcome them and put on great rock shows. As someone who is so supremely creative, did you find that the past 18 months or so, with every unfortunate speed bump, was an extra difficult time for you to be the artist and musician that you are at heart?

Lucky for me, my day job is writing music for animation. Right when lockdown started, my songwriting partners and I began work on an animated show for Netflix called Ada Twist, Scientist. I write songs for kids all day, every day. That’s my job. I got to work on that and a bunch of other animated projects throughout the pandemic. When you’re writing songs for kids stories, you realize that adult stories aren’t any different than growing up stories. I had the most extraordinary time finding my way in the pandemic through these stories that I get to write for animated programs. I feel extraordinarily fortunate that I got to make up my own perspective through song.

I remember for the first month or two, really not being able to leave the house, not even being able to see my writing partners, who I’m in the studio with every day. We didn’t get to see each other for two months and we had to work remotely. I had to build a vocal booth n my closet. I had to completely re-imagine my work. Being so thrown off balance, on top of trying to find creativity within that, I think was good for us. The enemy of creativity is complacency. Over the years I have run into times where I’ve really dialed it in creatively, but then the universe intervenes and smacks me upside the head and is like, “No, Kay. I don’t think so.” This was one of those times.

You’re far from the only supremely talented and successful member of your band. Each one of you, Greg, Michael, and Stacy, have in-demand careers, connections, and full lives that span farther than many realize. Since reuniting, and having all your own projects and personal enddeavors, how has the dynamic been between you all?  Surely the pandemic’s lockdown orders and distancing regulations must have shifted your perspectives on working together and touring alongside one another once again.

Oh God. There are so, so many ways to answer this. This is such a deep question because it has affected us in a zillion ways.

Before the pandemic hit, we had been writing on a pretty regular basis and had been working on a new full length album – our first one since 1997. We were kind of on a roll. We were really cranking on that and happy with what we were doing. We had been talking to our original producer, Mike Dineen, who had died of cancer a few years ago, so it was hard to imagine making an album without him. We had been talking to Adam Schlesinger from Fountains of Wayne about producing some new stuff and maybe taking on producing the album, too. Right as we went into lockdown, we stopped writing together, obviously, and then a month later, Adam died of COVID and that was really, really hard on all of us for a bazillion reasons. Personally, Adam was our friend, too, so it was just devastating. Then from a creative standpoint, it was just like none of us really had any interest in going back to writing…. We have really only recently begun to do so again, so when we launched plans for this tour, it was so pretty unclear personally and professionally whether we’d be able to do it or not. The vaccination had just come out and people had just started getting back to in-person things, but even still, there has been so much uncertainty. It’s been hard to really get excited, because you’re constantly like, “Is this real? Is this is happening?” I couldn’t even really allow myself to get excited about it, because I thought it was going to go away.

Of course. Now is not the time for anyone to be preparing for anything that could play into them getting their hopes up.

There you go! Preparing without everything in motion was hard. Everything has been muted by this heavy blanket of uncertainty – and that includes in my joy and excitement about doing it! But, now, with the airline tickets bought and the guys and I starting rehearsal, I can breathe. It’s happening. I get to be happy about this now.

FOR TICKETS TO LETTERS TO CLEO’S TOUR AND THEIR STOP AT NYC’S BOWERY BALLROOM ON NOVEMBER 16, CLICK HERE!