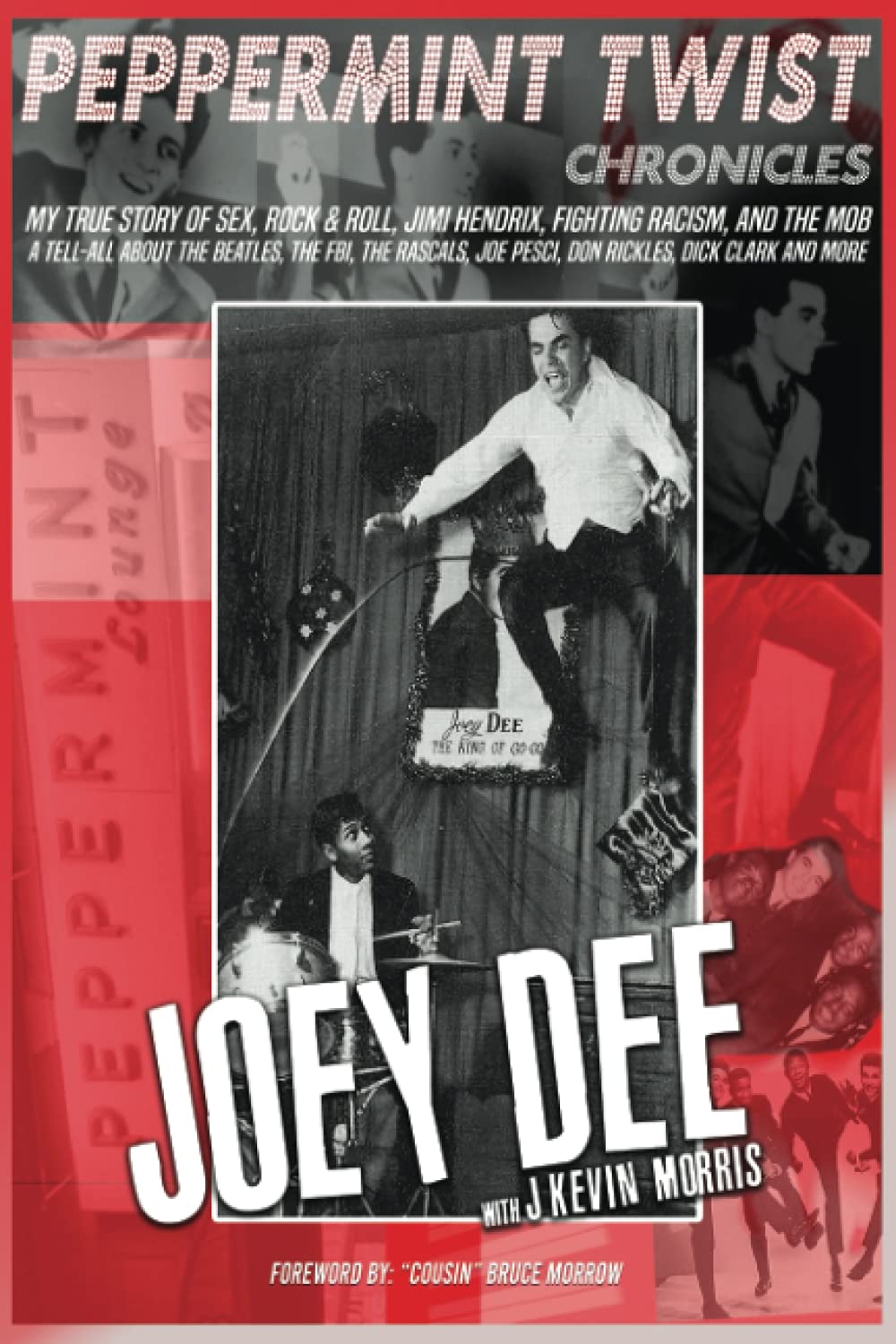 There was a time when Joey Dee was King of the Universe. He had the #1 song in the country. He had a still-unknown Jimi Hendrix in his band. On a Euro tour, his opening act was The Beatles. He was holding court at his own club—The Starliter on 46th Street in New York City—after packin’ ‘em in at The Peppermint Lounge one block south for a few years.

In 1962, “The Peppermint Twist” by Joey Dee & The Starliters, knocked Chubby Checker’s “The Twist” out of its coveted #1 slot. The song, originally written and recorded by Hank Ballard & The Midnighters in 1958, was a call-to-arms. A call to dance. Jackie Kennedy did The Twist in the White House. Marilyn  Monroe, John Wayne, Ava Gardner, Shirley Maclaine, Miles Davis, Judy Garland, Sal Mineo, Lenny Bruce, Salvador Dali and bigwigs of sports, politics and The Mob all showed up at The Peppermint Lounge. And Joey Dee, honking on his alto sax, singing, jumping into the crowd to twist, kept ‘em all dancing.

Joey Dee’s band was an incubator for future stardom. At various times in the band’s existence, not only was Hendrix in the band, but so was a guitarist by the name of Joe Pesci. Pesci would go on to give up rock’n’roll for acting.  But not before he put The Four Seasons together with Frankie Valli. Organist Felix Cavaliere would go on to form The Rascals, and invent the term “Blue-Eyed Soul” with such #1 ‘60s hits as “Groovin’,” “Good Lovin’” and “People Got To Be Free.”

It took 11 years but Joey Dee, who came out of Passaic as Joseph DiNicola, now 81 and living in Florida, has written the juiciest, most fun-filled rock’n’roll book of the year. He names names. He admits to years of sex, booze and rock’n’roll (no drugs…ever). He loses his wife over his constant womanizing (including a three-way event with the late actress Shelley Winters). He remarries only to become a widower and marry his first wife for a second time.  Peppermint Twist Chronicles: My True Story Of Sex, Rock’n’Roll, Jimi Hendrix, Fighting Racism, And The Mob, subtitled A Tell-All About The Beatles, The FBI, The Rascals, Joe Pesci, Don Rickles, Dick Clark and More (JOEY DEE & THE STARLITERS) has revelations on every page. It’s the kind of book that will keep you up nights because you just won’t want to put it down.

Imagine an integrated band touring the south before President Johnson signed the Civil Rights act into law! Joey Dee stood up for his guys, witnessed first-hand the kind of treatment certain musicians received because of the color of their skin, and did something about it. Whether it was threatening to walk while the crowd was getting bigger or demanding his guys all were able to stay at the same hotel, Joey Dee was an activist back when that term didn’t exist.

Earlier this this year, at Charlie Blood’s in Garfield, Joey Dee sat before the cameras of Director Fulvio Cecere for his spot in the upcoming docu-series The Jersey Sound. During a break in the filming, we shared a refreshing adult beverage and he spoke about the book.

“Who do you think gave Joe Pesci his first movie role? I did! He was an extra on the dance floor in a movie called Hey Let’s Twist. I wrote over 800 pages but only 300 made the published version. I got stories on top of stories. There’s so much history in the book. Things that people just do not know. Like when we took Jimi to a woman’s beauty parlor on the road in Buffalo just to get his hair done. He was really fastidious about his hair.

“Or the night that three gorgeous young chicks walked into The Pep. I knew they were under-aged. Sixteen maybe. I had my eye on them as they danced. They looked great.  Then they came up to me during a break.

“But then I thought about how I got my first break from The Shirelles. They put in a good word for me with Florence Greenberg of Scepter Records. I’ve loved all four of those girls for years for giving me my first break. So why shouldn’t I give these teenage girls theirs?

“I brought them up on stage. The band went into `What’d I Say’ by Ray Charles. And wouldn’t you know, they sang the hell out of it! Tore the house down. The people went nuts. And I signed ‘em up to be a permanent fixture in my group. I had to talk to their parents. Which I did in Harlem. They gave the ok with but one caveat. Their Aunt Helen had to chaperone when on the road. I had no problem with that. We did gigs up and down the eastern seaboard with them and Aunt Helen. Man, could they sing! They were The Ronettes. Now they’re in the Rock’n’Roll Hall of Fame and I’m proud to have given them their start.”

Joey Dee is the original Jersey Boy. On the back cover of his book, there’s testimonials from Barry Gibb, Aaron Neville, Julian Lennon, Tony Orlando and Tommy James. The word is out.