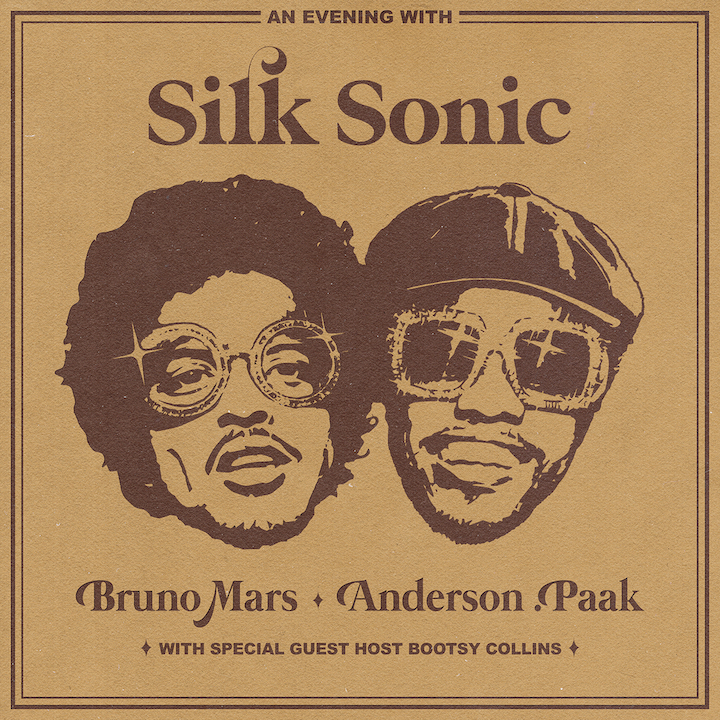 Bruno Mars & Anderson .Paak Blast Off with ‘An Evening With Silk Sonic’

The dreamiest 31 minutes of music come from Silk Sonic, but with their successful R&B meets pop meets soul track record, we aren’t too surprised.

After months of waiting, Bruno Mars and Anderson .Paak have released their highly anticipated album, An Evening With Silk Sonic. We were given a small taste of what to expect in the form of the first three singles; “Leave The Door Open,” “Skate,” and, most recently, “Smokin Out The Window.” The nine track album is an homage to sixties and seventies soul, especially reminiscent of TSOP (The Sound of Philadelphia) – think The Stylistics, The Delfonics, and The O’Jays. The duo throw in a bit of funk and slow jam feels for good measure.

The two met while touring in support of Mars’ 24K Magic. He and .Paak recorded what would become “Smokin Out The Window” at the time and the rest is history. They both admit in interviews that, if it were not for the pandemic, An Evening With Silk Sonic wouldn’t have been made. So, thank goodness for a once in a hundred year catastrophe?

For every bad experience, there is a silver lining and COVID-19 allowed the creative juices to flow. There are collaborations with Thundercat, Dap-Kings drummer Howard Steinweiss, Kenny “Babyface” Edmonds, and more. The most notable appearance comes from “the world’s only rhinestone rock-star doll,” the funk-god Bootsy Collins, who serves as the Master of Ceremonies. It’s only fitting, since he’s the one who named them Silk Sonic in the first place. This debut collaboration clocks in at a little over 31 minutes and it’s everything described and more.

We are introduced to the dynamic duo in the “Silk Sonic Intro” that promise to “lock this groove in tight” with Collins inviting us to the party: “Fellows, I hope you’ve got something in your cup and ladies don’t be afraid to make your way to the stage or a band that I named Silk Sonic”.

The album begins with the smooth “Leave The Door Open” that wines and dines the listener with promises of “dancing and romancing.” It’s no wonder it was a commercial success and went to the top of the charts.

“Fly As Me” follows with a bang! Trust me, this has all of the fire and desire and then some. “Fly As Me” has hints of James Brown, Parliament Funk, and hip hop sensibilities. I’m expecting it to be the next stellar hit. This is in the same stratosphere as “Uptown Funk,” “Tints,” “Locked Out Of Heaven,” and “JEWELZ.”

“After Last Night” is up next with Thundercat and Bootsy Collins on this sultry song. It rivals the likes of the tender sounds of Teddy Pendergrast and Isaac Hayes. In contrast, “Smokin Out The Window” offers the best form of revenge since Oran Juice Jones song “The Rain,” with lyrics to match! “This bitch got me payin’ her rent, payin’ for trips. Diamonds on her neck, diamonds on her wrists, and here I am all alone (all alone).” Bootsy laments at the top wondering what could have gone so wrong. “Put On A Smile” extends an olive branch from a heartbroken man to his lover, not necessarily the one in the previous tune.

“777” will cause a lot of booty shaking with gambling metaphors and plans to take over Las Vegas. “Skate” glides right after. The feel-good song of the summer makes you lace up those roller skates, float, and glide all over the dance floor.

An Evening With Silk Sonic closes with “Blast Off,” another sure-fire hit that gives you good vibrations. I’m not sure you can get better than that. I expect this work of art will receive a ton of awards and accolades, but, of course, deservedly so. It’s addictive, amusing, and every other cool adjective. Check it out and hear from yourself. You’ll thank me later!

SILK SONIC’S NEW ALBUM IS AVAILABLE NOW WHEREVER YOU LISTEN TO MUSIC!