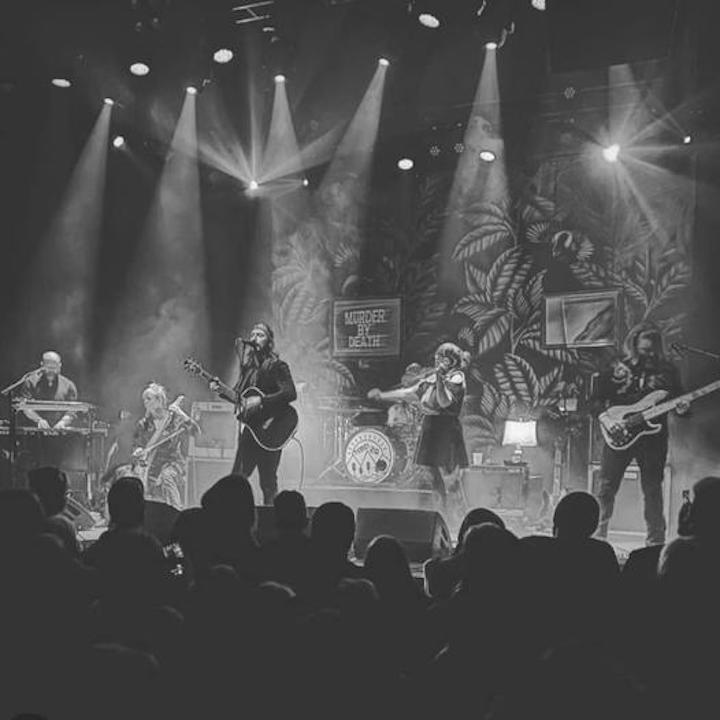 We’ve been covering the stellar work of Murder By Death for quite some time now, but never have we done so in the midst of a pandemic or with a topic of discussion being pineapple on pizza. Nothing has changed, though – this band is always fun and always game.

In an age where a lot of bands don’t last six months, 20 years can be a long time. Just ask guitarist & vocalist Adam Turla and cellist Sarah Balliet from the Bloomington, Indiana indie rock act Murder By Death. Since the band’s inception at the turn of the millennium, they’ve been the sole original members while going through different lineup changes and adding various elements to their sound. This evolution has helped them achieve their artistic identity which evokes Johnny Cash-esque gothic Americana. As part of their current 20th Anniversary tour that was postponed a year due to COVID-19, Murder By Death will be performing at Warsaw in Brooklyn on November 19 with Chicago singer-songwriter Shawn James opening things up.

Turla and I recently had a talk about the past two decades of the band, growing slowly but surely, having a dedicated community of fans, helping run a pizza shop, and a new album that’ll be out in 2022.

With this run of shows celebrating Murder By Death’s 20th Anniversary as a band, how do you view the band’s growth during this time? Do you view it in a forward-thinking way where you and the rest of the band are always progressing and incorporating new ideas or do you view it in a different way?

It’s impossible not to do some reflection. We were on this 20th anniversary tour when the pandemic hit so these are all the make-up shows that we’re doing so it’s given me a little bit of time to reflect as well. The idea was to say to our fans, “Hey, thanks for 20 years,” and we’ve amassed a really deep catalog of lots of stuff from all over our career and upon reflecting on the peaks and valleys the awesome thing has been that our band has experienced an incredibly slow, incremental growth. This pattern has been with us the whole time we’ve existed and these shows have been doing great with lots of people coming out and singing along. It’s hard not to feel a lot of gratitude and that’s the general word for what we’re all feeling these days.

What do you think has grown the most with you personally as a musician either as a guitarist, a lyricist or as a songwriter over these past two decades?

When our first album came out we made it when we were 18 and 19 years old and with our second album we were only a year older. We were so young and when people are looking back they’re seeing us in very formative, young years, but I’m proud of the work we were doing then and I was proud at the time. A lot of people still listen to that early stuff so that’s exciting. I think as far as growth, I’m a much better singer than I was and I’m much more confident and more natural. I’m just more confident in general thanks to years of people supporting us and basically giving us confidence. It’s helped the live show, it’s helped the albums and it’s helped the writing, just having people sort of believe in you never hurts.

Absolutely, that takes away the fear of it all. When you have people you know who have your back you feel comfortable pursuing things you probably wouldn’t have felt comfortable doing a few years ago.

Outside the band, you and Sarah run a pizza place in Louisville, Kentucky called Pizza Lupo where your brother-in-law Max is the head chef. What inspired the idea to start up the business and what’s your favorite kind of pizza?

We have always been obsessed with food and my mom is from Italy so I go there almost every year to visit family and to just enjoy it. They have always been very focused on Italian food as well and it was something that was missing in our city – just really good pizza, more traditional Italian versus Italian-American cuisine so that’s what we wanted to do and we wanted to do it in a non-chic setting. We wanted it to be approachable, it was a dream that we had for a long time and then five years ago we rehabbed a pre-Civil War building and we were there for 11 months remodeling it with this huge team of people. Then we opened up around four-and-a-half years ago and we’re grateful to still be around and very happy that we made it through the pandemic and we’re stoked to have won the Leo Weekly’s Reader’s Choice Award for the best pizza in Louisville.

Thanks. It’s just a little thing but it feels good after a crazy couple of years. Anyone who has ever opened a restaurant would tell you that it’s extremely hard, it’s not an easy business. We’re just very happy to be there and the food is so good. As far as my favorite pizza, I think a classic margherita pizza when it’s done right is one of the world’s greatest culinary achievements. We do a hybrid Neapolitan sourdough that has a bit of a New York vibe but it pushes more towards Neapolitan. Our general approach is that we like all styles of pizza as long as it’s done right… and the most important part is the crust.

Absolutely, I couldn’t agree more. From being on tour a lot and being a touring musician, you’ve probably had a lot of pizza in various cities around the world.

Which city do you think is underrated for its pizza?

In America, we tend to think of New York City as the pizza capital of the world, but I don’t feel that way. For me, in Rome there’s definitely the most styles of pizza and the most people that are executing that pizza exceptionally. There’s a place called Bonci that makes a square kind that’s very unique while being known for interesting toppings and a really good balance. There’s another place called Ai Marmi that has a super thin crust and Casa Verde which is just amazing.

There’s all these great pizza places that keep it simple with the dough being the major highlight and when the dough is that good it’s incredible.

They also do regular pizza, but Rome is my favorite, and I think New Haven style is really strong. I think Philadelphia has great pizza and New York obviously has some great pizza, but it’s got so many places that you can’t just walk in and get a great one everywhere. It’s so ubiquitous that some are naturally going to be better than others. Di Fara is still one of the super celebrated ones in New York. I’ve been there twice and I think it’s fantastic because they have a really signature style… but I’m just crazy about all this stuff and I’m always in it.

It’s awesome that you have a passion for it. One thing about pizza that has been hotly debated over the past few years is whether pineapple is a proper topping or not. Do you think it belongs on a pizza or do you think it’s total sacrilege?

Honestly, I’m a bit indifferent on that one because I have had one where if it’s good pineapple and it’s not soggy, for example, and it’s cooked enough where the liquid doesn’t get all over the dough, then it’s great. I get the ham and pineapple thing or the bacon and pineapple thing, but I never order it. I never choose it, but I wouldn’t kick it out entirely unless it’s truly heinous.

From January 21 to 23 next year, Murder By Death is going to be doing some special shows at the historic Stanley Hotel in Estes Park, Colorado, which is famous for inspiring Stephen King’s celebrated horror novel The Shining. This isn’t the first time you’ve performed there, so how many years have you played the hotel and who had the idea to make it an annual thing?

This will be our ninth year doing it – we’ve done five shows every year and it’s just crazy. It sells out right away every year and it was this idea I had about 11 years ago where I thought it would be fun to play somewhere that’s not booked all the time. I wanted to try something outside the box so I brought it up to the promoter that’s done our Denver shows because the hotel is an hour-and-a-half drive from there and he loved the idea so he helped me set it up. We also do a couple nights in a cave in Tennessee, we started doing those four years ago and it has the most incredible setting, sound, and everything. I think what it is it’s that when you’ve been around for a long time it’s really cool to experience something that’s not a black room with just a sound system and a bar.

It’s fun to be yourself in this other setting and it has a certain amount of atmosphere. I do really like club shows but it’s also fun to come up with some new, fresh ideas.

Having different settings to perform in makes it more fun and it makes it more versatile and worthwhile, so I totally see where you’re coming from.

Yeah, ultimately our fans have really created a community and a lot of them have become friends and they’ll meet up at these events. It becomes a little bit of a cultural gathering and they’ve created their own culture around the band, which, to me, is exactly what you want. I still want to be an entertainer and we want people to have a good time so I’ll throw a party every once in a while. I want to keep doing this for a living so I’ll set up the party and all people have to do is support it, head up there and have fun. It’s a small, positive thing that just makes people happy and it makes me happy.

I can totally see why. It’s been a few years since Murder By Death released their last album, The Other Shore, back in 2018. Can we expect a new record to come out sometime in 2022?

We are working on new stuff, we’ve been writing since the summer, we got a studio booked, and we will have a record coming out next year. We originally planned to have it come out this year but we pushed back the whole process because of the pandemic. We just want to get through these make-up shows and then we’ll immediately turn our focus to track all these songs we’ve written, so we’re actually very excited about that because the work has been really good and everybody is super proud. It’s our first record with Emma Tiemann on violin, so there’s been really cool songwriting going on.

FOR TICKETS TO MUDER BY DEATH’S BROOKLYN STOP AT WARSAW ON FRIDAY, AND THEIR TOUR AS A WHOLE, CLICK HERE!