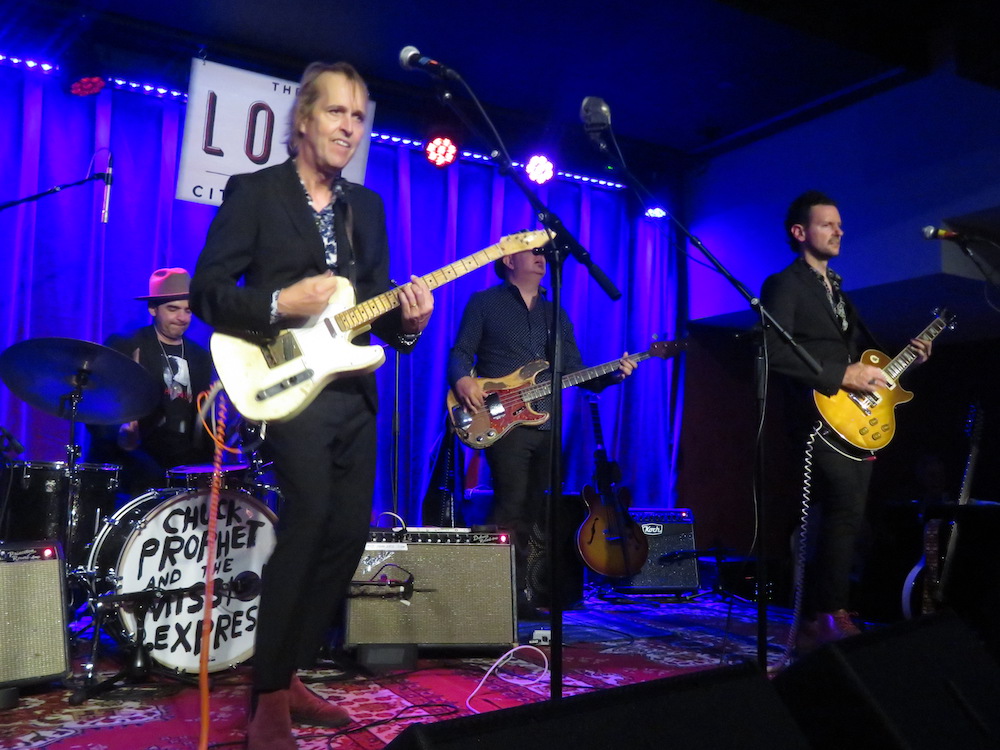 For more than 30 years, Chuck Prophet has been an underground sensation, drawing a small but faithful following. A prolific song crafter, he composes and performs rocking original tunes with intriguing reflections on life, death, and the many episodes in between. Unable to tour last year, Prophet’s two rescheduled concerts at City Winery NYC showcased his talents and charm to small but dedicated audiences.

Prophet anchored his audience’s attention in several ways. The most curious strategy was how he seemingly randomly sprinkled the names of dead cultural icons in his lyrics. Early in his set he sang “Bobby Fuller Died for Your Sins,” name dropping the rocker who hit with a cover of the Crickets’ “I Fought the Law” in the 1960s and a few months later died a mysterious death. A few songs later, Prophet sang “High as Johnny Thunders,” memorializing another rocker who died a mysterious death. Several songs after that, Prophet sang “Bad Year for Rock and Roll,” which mourned the musicians who died in 2016, including David Bowie and Prince. Not limited to singing about dead musicians, he also sang songs about San Francisco’s legendary baseball player Willie Mays and adult entertainment pioneers Jim and Artie Mitchell.

Another anchor Prophet had in his tool kit was the support of a band he called the Mission Express, comprised of Prophet’s wife and vocalist/keyboardist, Stephanie Finch, guitarist James DePrato, bassist Kevin White, and drummer Vicente Rodriguez. (The band is named after the Mission Express bus line that runs through Prophet’s neighborhood in the San Francisco Bay Area.) The musicians fueled Prophet’s rock and roll mission, which was to jam the songs into a spirited frenzy. DePrato was the band’s de facto lead guitarist, yet on several occasions he stepped back and watched Prophet wail.

A third way Prophet captured the audience’s attention was how his frequent light-hearted quips improvised between songs revealed his sparkling charisma. Halfway through the show, a photographer moved to a front seat by Prophet. Brandishing a smile, Prophet said into the microphone, “Do you want to share with everyone why you are late?”

Prophet employed common dynamics as well. He engaged audience participation at the end of his show with sing-alongs. Finally asked the audience to step out of their seats.

Prophet’s “California noir” peppered many songs throughout the nearly two-hour set. Sporadically, his lyrics unveiled his other sides. “Temple Beautiful” was a melancholy panorama of San Francisco, for instance. Several songs featured harmonies with his wife and others. He and DePrato also had a guitar duel towards the end of the show. All around, Prophet performed a pleasing show, even as he remains an underground secret.