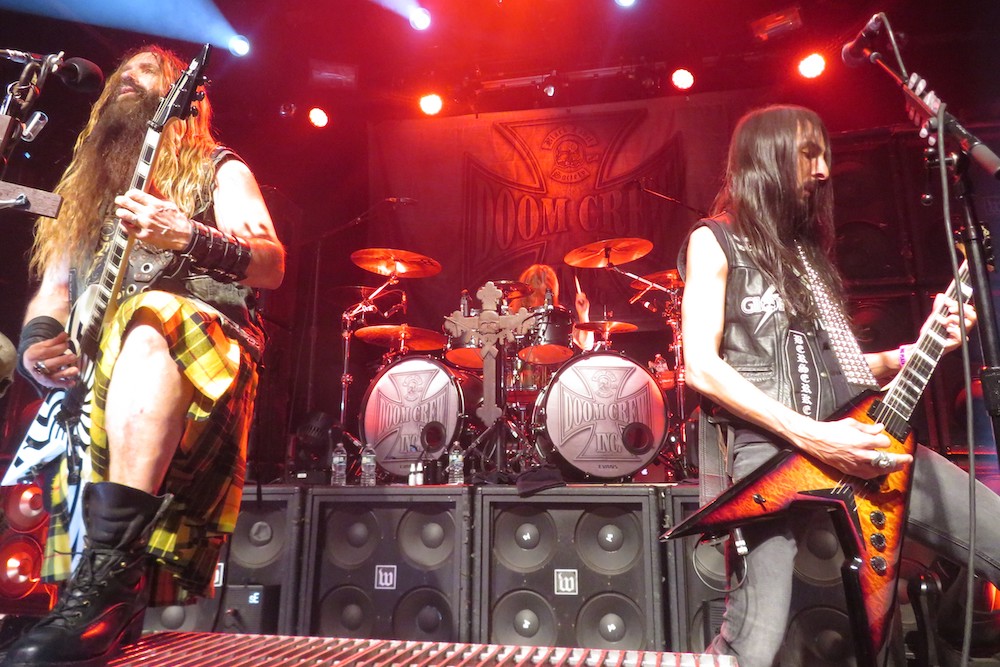 Hard rocking music loaded with extended guitar leads is disappearing these days. New Jersey native Zakk Wylde has made it his mission to ensure the genre does not die. Wylde first splashed onto the international metal radar when he joined Ozzy Osbourne’s band in 1989. In 1989, Wylde formed his best known band, Black Label Society. Black Label Society will release its 11th studio album, Doom Crew Inc., on November 26.

At Irving Plaza, following impressive sets by Prong and Obituary, the stage was hidden by a giant curtain emblazoned with the Black Label Society logo. Black Label Society began to play, lights flashed, the curtain dropped, and four cannons along the edge of the stage sent pillars of steam upwards. Wylde instantly proved he was as wild as his name. He cast an imposing figure on stage, like a Norse god, with his long blond hair and bushy blond beard, kilt, cutoff denim vest, and black combat boots. As he played dazzling leads on his guitar, his long hair covered his face, bouncing to the headbanging rhythms of the music. After a few moments, he positioned himself to sing, moving to a microphone stand decorated with numerous skulls, and placing his left foot on the adjacent riser. He would assume this position each time he sang, then step back for his instrumental passages.

Wylde allowed very little time for chatter between songs, so there was not much reveal into the man or his craft. Instead, each song blasted the audience with ferocious metal picking piercing through heavy, sludgy riffs. Wylde used a truckload of flashy guitars throughout the set, including a double-neck guitar for “The Blessed Hellride.”

Wylde counted on the support of second guitarist Dario Lorina, bassist John “JD” DeServio, and drummer Jeff Fabb. This line-up has remained steadfast since 2014, so they knew to give Wylde the bandwidth he needed to be the consummate guitarist, vocalist, and ringleader. In recent years, Wylde gradually has been giving Lorina more opportunities to step to the front with his own guitar leads, such that the twin guitar riffs on several songs and particularly the guitar duel during “Suicide Messiah” moved Lorina far beyond the role of rhythm guitarist.

Although BLS will release a new album in just a couple of weeks, the band performed only one new song, “Set You Free.” The other 12 songs came from seven earlier albums. Wylde sat at the piano for two back-to-back slow and sad songs, “Spoke in the Wheel” and “In This River,” the latter song accompanied by images of the late rockers Lemmy Kilmister and Eddie Van Halen. Otherwise, the bulk of the set was comprised of fierce guitar-led songs, many of which the band performed on previous tours. A few more new songs previewing the forthcoming album would have made the Doom Trooping over America Tour feel  different from the previous tours.