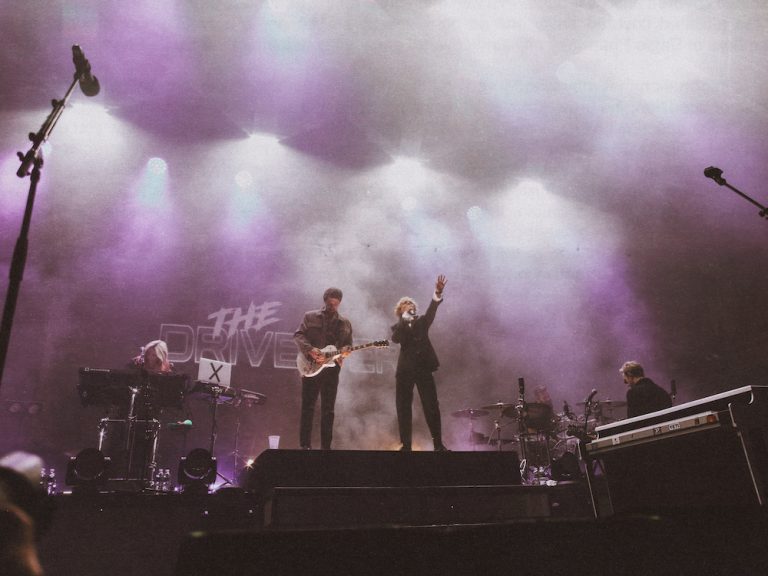 Terminal 5 is not the most glitzy venue in the Big Apple, but The Driver Era did, in fact, bring all the glamour (and more) when rolling up with the Girlfriend Tour last week. The proof is in this review, but it can experienced the most vicariously and wholeheartedly within the following set of otherworldly photos taken by Grace Prachthauser.

We are honored that The Driver Era are mainstays on The Aquarian, so they need little introduction. Rocky and Ross Lynch are multi-talented brothers whose only artistic fear is to not be 100% themselves in their work, so this literal ‘era’ of their music career is all about their homegrown creativity and DIY-style experimentation.

That concept might seem all over the place or that it wouldn’t translate too well on stage, but when we say that couldn’t be farther from the truth, we mean it. Rocky and Ross own the stage from the minute they simply step into the wings. Their music fills a room and gets everyone to their feet like nothing else. An energy beyond palpable takes precedence upon their entrance, not only because fans are thrilled to see the band behind some of their favorite songs, but because these favorite songs of theirs are coming to life in new ways.

With The Driver Era, there is always something new to unlock – whether it be a note change, the evolution of a song’s tempo, or an updated meaning behind a lyric or two. It’s expected with the brothers, so while the switch-ups wield little shock value, there is still a genuine thrill that shoots like lightning through the crowd when it happens – and we have to give credit to Rydel Funk and Riker Lynch, the older siblings of the duo, who are masters at keeping the tone of the night leveled out regardless of the spur of the moment happenings – and are simply warm additions to the concert as a whole.

Together, the live band that make up The Driver Era: On Tour encapsulate everything this group has been working toward since day one: reality. The Lynch brothers, and siblings altogether, might be notable figures in entertainment and may have some millions of followers caring about what they’re up to, but all of them are down-to-earth before, during, and after taking the stage at a sold out, headline show of theirs. Rocky and Ross are approachable, shining in front of an audience in a way only true passion and adrenaline can boast. Attending one of their shows, as we did, is as humbling, communal, and fun as going out to see your best friend’s boyfriend’s band play some hole-in-the-wall bar downtown. (With the addition of having to wait on a line two-and-a-half blocks long to get in, of course.)

These two don’t feel too much like rockstars when rocking out and trading instruments, nor do they come across as a band who grew out of Disney Channel. Their fans don’t look too much like rock ‘n roll groupies or even teeny boppers for that matter. The Driver Era blend the best qualities of true live music (Picture early 1990s-style club shows) with intense post-modern production (Think: Prince meets Fall Out Boy meets The Weeknd) for an event that is just as nostalgic as it is wholly in the moment. Terminal 5 lit up with cell phones, not lighters, and fans of all ages bounced and danced instead of ever thinking about throwing an elbow. The Driver Era and their fans are family. They are a musical, entertained family who bounce love, melodies, riffs, and excitement off one another time and time again. It was even felt with the opening acts, Moontower and The Wrecks, who were accepted into the lineup, crowd, and night easily – as if every single person there were their biggest, most adoring fans… They probably left Terminal 5 feeling that way, though. All throughout the show the camaraderie could not be beat and every single song was a mind-blowing hit or an unstoppable fan favorite – or a cover song that ended up being both.

Songs like “Heart of Mine” tore into the crowd full of emotion while “cray z babe e” ensued a sultry dance party. (The disco ball hanging from the warehouse-esque ceiling of Terminal 5 came in handy during the synth-based latter track, blasting sprinkles of light in and around the venue like it was a much more tame take on Studio 54.) “When You Need A Man” felt like a jam session and a music video all at once, coming across as spur-of-the-moment and rip-roaring similarly to the witty recorded version, which simpers onward with prowess and electronic stamina. (Something the band and I actually saw coming early this fall in our last conversation prior to the tour kicking off.)

Classics – if you can call them that only a handful of years into this – like “Preacher Man” were exhilarating. Many of the fans in the audience have yet to experience The Driver Era live like this before, so the band’s debut single was much more than a crowd pleaser, but a determined number illuminating what a high note their personalized musical sound started out on. A treat for The City That Never Sleeps was an intricately-crafted cover of “Sex on Fire” by Kings of Leon, a growing staple in the TDE catalog that is worth of the frenzy that it causes down in the pit and up on the balconies.

Rocky shreds all on his own, during those songs and also much of the night, but he plays off Ross’ own instrumentation like its innate – which it might be given their sibling status. Harmonies are top notch, melodies are found even in the wildest of eccentricities, and youthful abandonment swirls in the air at a Driver Era show. Even with the perfection, there is improv, relatability, and hints of whimsy that come from a plain ‘ol love of performing. They’re not at all out of reach. This band, these brothers, are as real as they get.

Ross Lynch is effortlessly charismatic. Rocky Lynch is delightfully composed. The Driver Era, especially when brilliantly glistening on stage, is a balance of the two: endearing and comfortable. Still, nobody is having more fun than the band on stage and nobody is going to show that better than them – the creators of X and Girlfriend, the voices behind tens of genre-less songs, and the inspirations for just going out and having a damn good time.