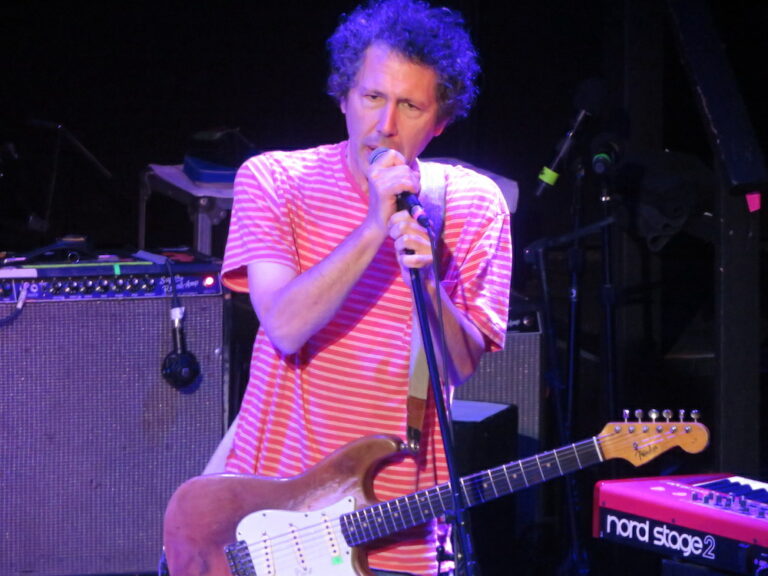 Yo La Tengo’s annual “8 Nights of Hanukkah” concert series triumphantly returned to the Bowery Ballroom following a COVID break. The concerts started in 2001 at Maxwell’s in Hoboken, New Jersey, and continued through 2012, pausing temporarily due to the closure of the club. Yo La Tengo resurrected the tradition at Bowery Ballroom from 2017 to 2019. Due to the COVID pandemic, YLT performed one live stream concert from the Greene Space during Hanukkah 2020. This year, the band returned to the Bowery Ballroom to resume the tradition.

Over the years, each of Yo La Tengo’s Hanukkah concert has started with unannounced music and comedic performance. Yo La Tengo then performs a unique set, never repeated, and often features guest musicians. The evening concludes with a celebrity dj set. In previous years, Ray Davies, Ronnie Spector, David Byrne, John Cameron Mitchell, Superchunk, Graham Nash, Lucinda Williams, Jeff Tweedy, Nick Lowe, Robyn Hitchcock, the Strangeloves, John Mulaney and even the Amazing Kreskin have been part of the Hanukkah fun.

Each night, the revenue collected from the show is donated to a charity. On the second night of Hanukkah 2021, the concert benefitted the Trevor Project. The Sun Ra Arkestra, led by 97-year-old bandleader Marshall Allen, and comedian Todd Barry provided opening sets. Barry and five members of the Sun Ra Arkestra horn section also joined YLT during the main set. Barry is the sole comic who has performed on at least one night of every Hanukkah gig since they launched 20 years ago.

As anticipated, Yo La Tengo (guitarist Ira Kaplan, bassist James McNew, drummer Georgia Hubley) performed a loose set of quirky indie original music and covers, synthesizing an eclectic blend of folk, punk rock, shoegaze, and a bit of electronic music. This night’s set seemed more hushed and somber than the norm at previous performances, with less than a handful of the band’s trademark sprawling noise-jams. The blaring addition of the horn section for the last six songs of the main set elevated the intensity of the performance. These collaborations included YLT and Sun Ra songs, as well as a cover of an obscure rhythm & blues song by Rex Garvin & the Mighty Cravers.

Yo la Tengo often highlights Jewish songwriters during the Hanukkah encores. On this night, the encores began with Blue Oyster Cult’s “This Ain’t the Summer of Love,” featuring Barry on drums. Yo La Tengo also covered the Ramones (“Can’t Make it On Time”), the Cramps (“TV Set”), and the Shangri-Las (“Heaven Only Knows,” composed by Ellie Greenwich) during the encore.

With the brand new omicron strain making headlines that week, signs posted throughout the Bowery Ballroom read that “Yo La Tengo requests that all patrons wear a mask throughout the duration of your time at the show tonight except while drinking.” In a city that struggles to get its nightlife back to pre-pandemic levels, YLT’s Hanukkah run was a fresh blast of cool late-autumn air. The hanukkiah on stage with its three lights symbolized a historic moment from thousands of years ago, but also showed how a bit of light can overcome a period of darkness. Hopefully YLT’s next Hanukkah series will come within a more positive context and lead to a more joyous celebration.